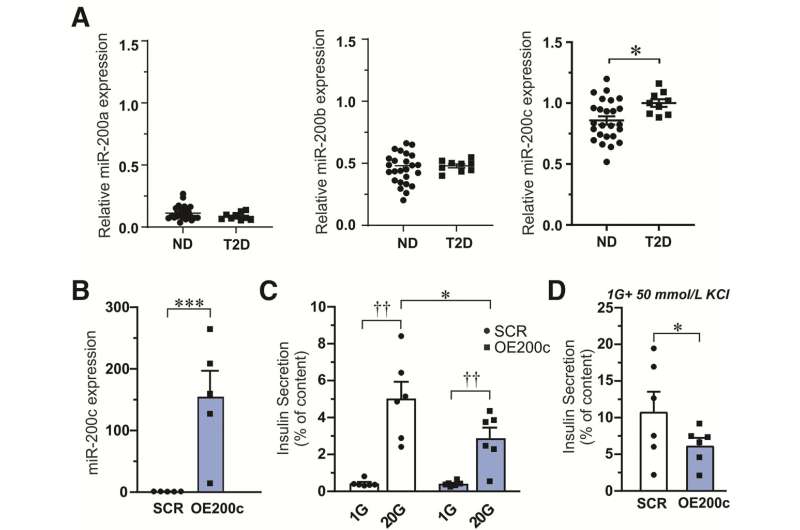 Researchers at Lund University have discovered increased levels of of a microRNA in type 2 diabetes, which has a negative effect on insulin secretion. Their experiments on human insulin producing cells in the pancreas also demonstrates that it is possible to increase the insulin secretion by reducing the levels of this microRNA. An important goal of the research is to develop new treatments for people with the disease.

In type 2 diabetes, the ability of the pancreas to produce and release insulin is impaired. Previous studies have demonstrated that microRNAs are involved in this deterioration process. MicroRNAs are non-coding RNAs that regulate the number of genes and proteins in a cell. Reducing the amount of microRNA could be a possible treatment for patient with type 2 diabetes.

“Our study demonstrates that the levels of miR-200c differs between people with and without the disease. Few studies within this area have been conducted with a similar amount of human material as in this study,” says Lena Eliasson, a diabetes researcher at Lund University Diabetes Centre (LUDC) and corresponding author for the study, published in the scientific journal Diabetes.

“The increase was approximately threefold in all the donors. We would have liked to carry out this experiment in more donors, but it is difficult to come across newly donated material. We are of course very grateful to the donors who have contributed to the study in different ways. It is important to understand what happens to the insulin secretion and how it is regulated in human beings to develop new treatments,” says Jones Ofori, one of the main authors of the study and a researcher in diabetes and epigenetics at LUDC.

The researchers behind the study are planning to confirm their results in diabetic rats to better understand what happens with the insulin secretion when they reduce the levels of miR-200c. An important research objective is to develop new treatments of type 2 diabetes. Previous research at Lund University Diabetes Centre has shown that diabetes can be divided into different subgroups based on disease progression, and that there are some groups of patients who are experiencing more problems with insulin secretion than others.

“Current treatment options of type 2 diabetes are not optimal for all. Several studies have shown that there is a need for more individualized treatments of type 2 diabetes. It may be interesting for us to target a treatment towards groups who are having severe impairment in insulin secretion. In the long-term perspective, we hope that our research will lead to treatments that may contribute to better control of blood sugar levels,” says Lena Eliasson.

The research group is currently carrying out a mapping of microRNAs that may be involved in the secretion of insulin in type 2 diabetes. This knowledge is of importance in the development of precise treatments.

“In our mapping of microRNAs, we can see that miR-200c is strong candidate for targeted treatments, that also appears in other studies. A challenge that is lying ahead of us is to develop an insulin treatment that will only affect the islets of Langerhans and no other tissues,” says Lena Eliasson, professor in experimental diabetes research at Lund University.

The study has been carried out on islets of Langerhans in the pancreas, donated to the Human tissue lab (HTL), an important biobank for diabetes research which has been established as a part of the strategic research area Excellence of diabetes research in Sweden (EXODIAB). HTL collects insulin producing cells, as well as liver, muscle and fat tissues in humans. The biobank stores blood samples, urine and stool samples and information about individuals and their disease history. HTL has been established in collaboration between Lund University and Uppsala University, the two universities that are a part of the research collaboration EXODIAB.

MicroRNA and islets of Langerhans

MicroRNA are small, non-coding RNA molecules that regulate the production of proteins. A single microRNA can regulate many proteins in a cell or signaling pathway. MicroRNA are involved in the development of type 2 diabetes and the ability of the pancreas to secrete insulin.