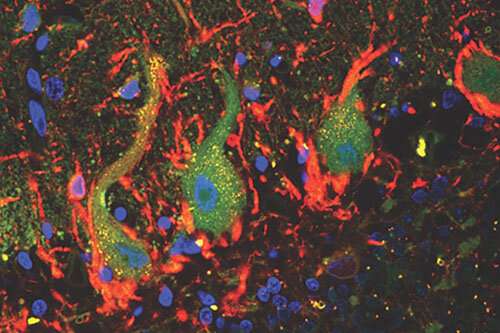 The article, published in Brain Pathology, describes how SAFB1 expression occurs in both spinocerebellar ataxias and Huntington’s disease and may be a common marker of these conditions, which have a similar genetic background.

The researchers analyzed SAFB1 expression in the post-mortem brain tissue of spinocerebellar ataxias (SCA’s), Huntington’s disease (HD), Multiple sclerosis (MS), Parkinson’s disease patients and controls. They found that SAFB becomes abnormally expressed in the nerve cells of brain regions associated with SCA and HD. Both of these conditions are associated with a specific pathology, called a polyglutamine expansion (an amino acid repeat), which only occurs in SCAs and HD. The same pathology was therefore not seen in control Parkinson’s disease or multiple sclerosis.

“These novel findings highlight a previously unknown mechanism causing disease which, importantly, suggests SAFB1 may be a diagnostic marker for polyglutamine expansion diseases, such as HD said lead author, James Uney, Professor of Molecular Neuroscience at the University of Bristol.

“We were also able to demonstrate how SAFB1 binds the SCA1 gene with the disease causing polyglutamine expansion (which causes spinocerebellar ataxia 1). As well as identifying a possible diagnostic marker, these findings open up the possibility of developing new therapeutic treatments for these rare but devastating neurodegenerative diseases.

“The next step is to establish whether inhibiting SAFB1 expression protects patients.”