Most monoclonal antibodies and vaccines target the spike protein of SARS-CoV-2. This protein is key to the pathogenicity of the organism. Many copies sit on the surface of the virus. This is a trimeric protein formed of two subunits that require cleavage by a host protein to function. S1 contains a receptor-binding domain (RBD) that binds to angiotensin-converting enzyme 2 (ACE2) and other receptors to mediate viral cell entry. The S2 subunit is responsible for membrane fusion. 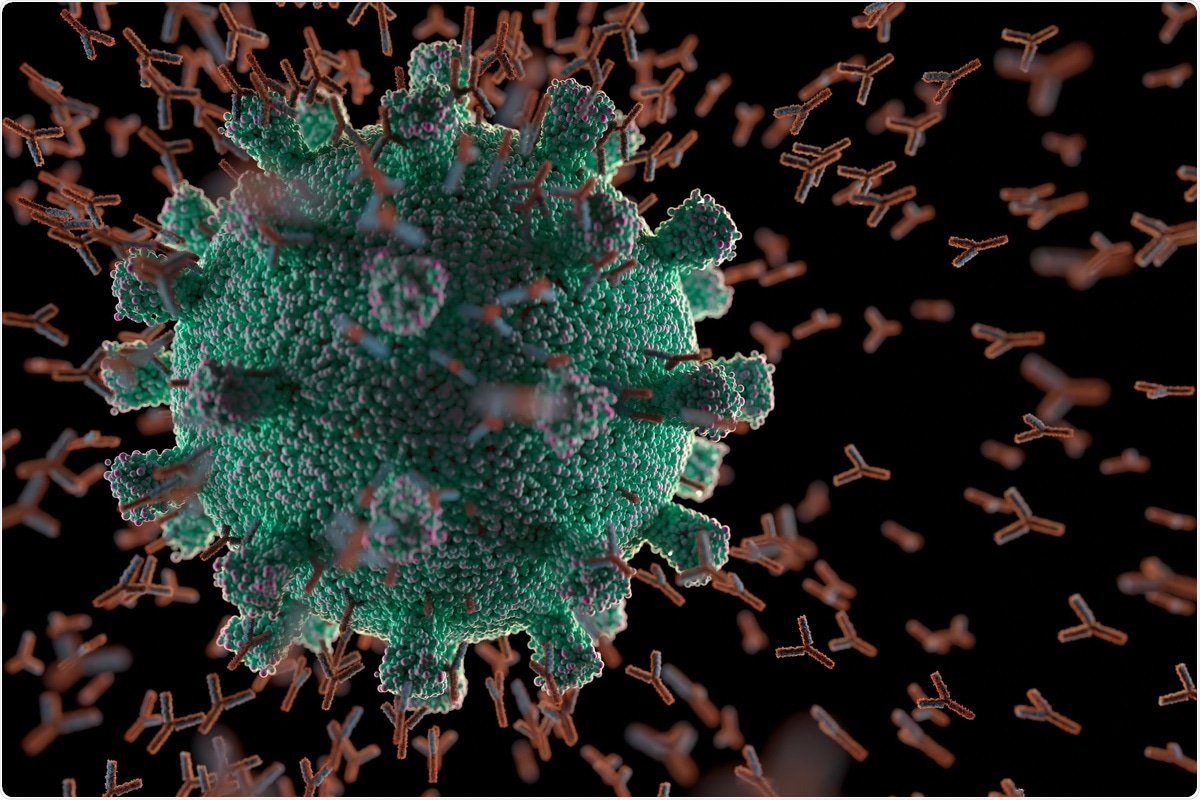 Generally, neutralizing antibodies (nAbs) target the RBD of the S1 subunit to compete with ACE2 and prevent infection. The most effective can bind simultaneously to two RBDs within the S protein trimer. There have been issues delivering nAbs in sufficient doses to reach the sites in the lungs that the disease can be found, but the greater issue is the same that threatens vaccination programs worldwide.

Variants of concern (VOCs) have arisen globally. Many of these can show increased transmission and the ability to evade vaccine-induced immunity due to mutations that can change the conformation and residues within the spike protein. Researchers from the University of Toronto set out to create a new tetravalent antibody that could bind with enough potency that it could remain effective against VOCs.

A preprint version of the study is available on the bioRxiv* server while the article undergoes peer review.

The researchers used a synthetic human Fab-phage library to develop a second antibody that can bind to the RBD alongside their previously characterized nAb 15033-7. The second antibody was known as Ab 15036. It displayed a different paratope compared to 15033-7, but phage ELISAs showed that it still ended up competing for binding to RBD. Bilayer interferometry (BLI) assay revealed that the sites overlapped while the antibodies did bind to different epitopes on the RBD.

The scientists then produced IgG and D-Fc versions of Ab 15033-7 by transfecting Expi293F cells and purification of the proteins using protein-A affinity chromatography. SDS Page gels allowed confirmation of protein purity. These were used to construct D-Fc-F proteins using the Fab of one of these two antibodies fused to the D-Fc 15033-7 C-terminus. This resulted in tetravalent molecules that contained either four copies of the 15033-7 paratope, or two copies of the 15033-7 in the diabody head and two copies of the 15036 paratope in the Fab arms. Following purification, BLI analysis with trimeric spike protein showed very tight binding.

Once this was created, the ability of the two IgGs and the two D-Fc-Fs to bind to various VOCs was assessed using mammalian cell infection assays with lentivirus-like particles pseudotyped with different SARS-CoV-2 spike proteins. A total of seven pseudoviruses were used, one wild-type, the rest using spike proteins from different variants, including the Delta and Alpha variants. The 15033-7 IgG was effective against most strains, showing the highest binding to WT and variants B.1.1.7, B.1.617.1, and B.1.427/429. The 15036 IgG showed a similar pattern, with lower binding overall. D-Fc-F 33-7:33-7 (with four copies of the 15033-7 paratope) was more potent against all variants that the IgGs were effective against but equally poor at binding to the variants the IgGs struggled against. The D-Fc-F 33-7:36 (two copies of 15033-7, two copies of 15036) showed massively increased potency, with over 100-fold enhancement in some cases, even showing strong binding against the variants that the IgGs could not bind well.

The authors highlight how their technique exploits the trimeric structure of the SARS-CoV-2 sequence. Showing that an engineered antibody with two distinct paratopes can bind to VOCs that both individual IgGs struggled against. The sheer scale of increased potency shows that this design strategy could prove extremely effective against viruses like SARS-CoV-2.

The researchers also suggest that the tetravalent antibody that could bind to multiple epitopes could be even more effective than previously thought – close inspection of the results revealed that the limits of the assay may have been reached, displaying an artificially reduced result. These encouraging discoveries provide valuable insight into the disease and help introduce a way to prepare for new variants before they arise, even as suggestions have been raised that variants that could completely evade vaccine-induced immunity may begin to arise.

bioRxiv publishes preliminary scientific reports that are not peer-reviewed and, therefore, should not be regarded as conclusive, guide clinical practice/health-related behavior, or treated as established information