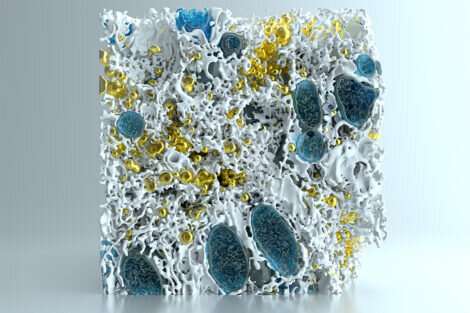 Cells use their molecular architecture to regulate their metabolic functions, and repairing diseased cells’ architecture to a healthier state can also repair metabolism, according to a study led by Harvard T.H. Chan School of Public Health researchers.

“Chronic metabolic disease, which includes obesity, diabetes, and cardiovascular and liver diseases, is the biggest global public health problem,” said Gökhan Hotamışlıgil, James Stevens Simmons Professor of Genetics and Metabolism at Harvard Chan School and the director of the Sabri Ülker Center for Nutrient, Genetic, and Metabolic Research. “The fundamental regulatory mechanism that we discovered can be used to evaluate the susceptibility—or resistance—of individuals to a disease state like obesity, and determine what steps, such as diet, nutrients, or fasting, will reduce, eliminate, or exacerbate these states. We can imagine a whole new array of therapeutic strategies targeting molecular architecture, similar to the restoration of an ailing building or preventing its deterioration.”

The team then partially restored the ER’s structure using technologies that can repair molecules and proteins that can reshape cellular membranes—which also repaired the cells’ metabolism. The restored cells looked normal, controlled lipid and glucose metabolism much better, and remained stress free and more responsive to stimuli.

“The outcome was really striking—when structure is repaired, so is the cell’s metabolism,” said Arruda. “What we are describing here is a whole new way of controlling metabolism by regulating molecular architecture, which is critical for health and disease.”

The images produced from this research are also the most detailed visualization to date of subcellular structures while the cells are still intact in their tissue environment. Other researchers have created similar imaging before, but mostly in single cells or in culture.

“High-resolution imaging and deep-learning-based analysis helped us to see that structural regulation of intracellular environment and organelle architecture is a key component of metabolic adaptation. Targeting this regulation may hold therapeutic opportunities to treat metabolic diseases such as diabetes and fatty liver disease,” said Parlakgül.