A pensioner with a tumour the size of a watermelon in his belly has made a miraculous recovery after life-saving surgery.

His stomach had started to grow so big he looked pregnant at the start of 2021 but blood tests by his GP did not pick up on the cancer.

A CT scan at Royal Bournemouth Hospital revealed the sarcoma tumour and doctors told him there was nothing they could do.

The retired social worker was told the growth was inoperable and would continue to expand into his vital organs and crush them eventually.

But a second opinion suggested he could go under the knife — although surgery could kill him.

Doctors operated in December and he survived, despite losing a kidney, with the tumour completely removed.

Mr Cornelius is now back jive dancing with his wife of 44 years Pam, despite suffering permanent numbness in his right thigh. 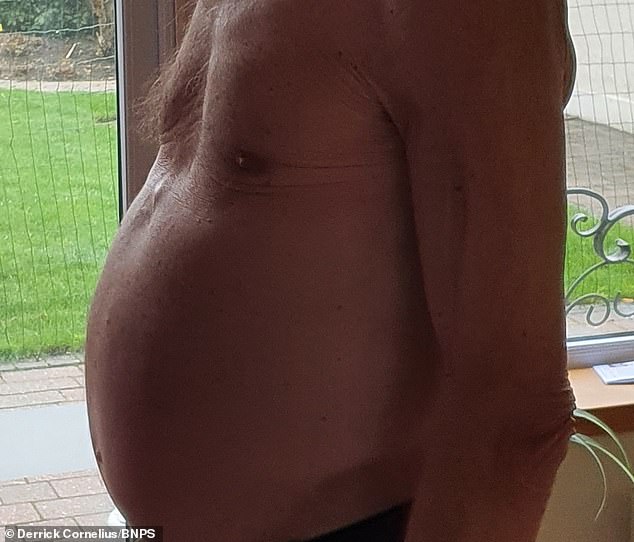 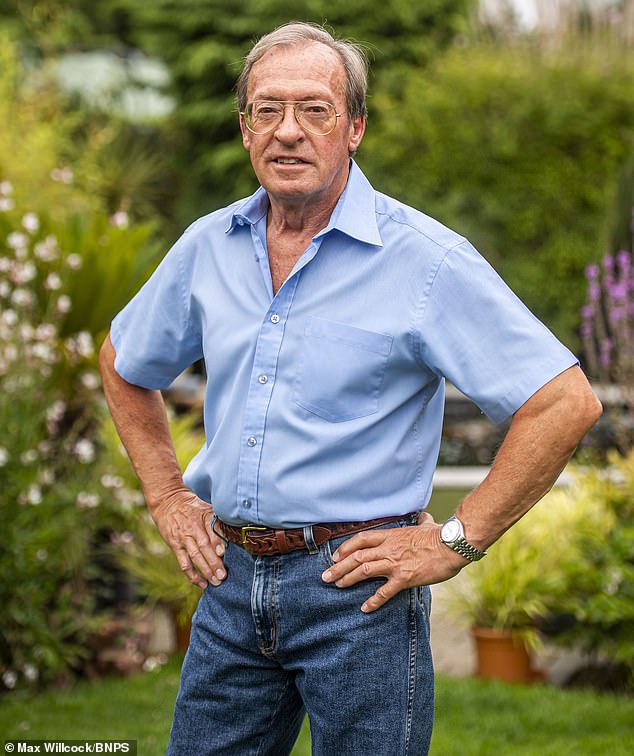 Sarcomas are uncommon types of cancer which can grow anywhere in the body – on muscle, bone, tendons, blood vessels and fatty tissue.

Bone sarcomas are rare and affect approximately 670 people per year – but there are other types of bone cancers.

There are around 100 different types of sarcomas and about 5,300 people are year are diagnosed with them in the UK.

Sarcomas can be treated well if people catch them early, but many people do not get diagnosed until their tumours are about the size of a tin of beans.

Only slightly more than half of people with sarcomas (55 per cent) survive for five years or more after their diagnosis.

Symptoms of sarcomas can include bone pain, swellings or lumps, and restricted movement if it is growing near a joint.

Treatment may involve typical cancer therapies such as surgery, chemotherapy or radiotherapy.

Mr Cornelius said: ‘I do view my life differently now because I feel like I have had a near-death experience.

‘When I first had my diagnosis there seemed like there was no hope at all. Absolutely none and that I just had a few months left to live.

‘Now I count my blessings every morning and I think how lucky I am.

‘I just hope that when people read my story they try to get a second opinion because it might save more lives.’

He first noticed he was putting on weight during a period of inactivity following a running injury early last year.

It wasn’t until October when he had his flu jab that he had a conversation with his GP about the sudden and rapid weight gain.

He was booked in for tests at Royal Bournemouth Hospital, where a CT scan confirmed the devastating news he had sarcoma cancer.

He said: ‘I was told the tumour had taken up 90 per cent of my stomach space and was threatening to expand into my vital organs.

‘When a woman has a baby they are usually seven pounds in weight. I was carrying around the equivalent of triplets.

‘I was told that it was terminal and nothing could be done.’

‘Obviously my wife Pam was upset, but I tried to keep the mood light, I was not too worried. There was nothing we could do.’

There are around 100 different types of sarcomas and about 5,300 people are year are diagnosed with them in the UK.

Only slightly more than half of people with sarcomas (55 per cent) survive for five years or more after their diagnosis.

But Dr Anthony Skene, a consultant at the hospital, saw his case and sought a second opinion with Dirk Strauss, a consultant surgical oncologist at the Royal Marsden Hospital in London.

After meeting with Dr Strauss, Mr Cornelius was told that it could be removed but that the operation could be fatal.

He said he felt ‘elated’ when he was later told about the second opinion.

Mr Cornelius said: ‘Suddenly there was hope. When I went to London and met with Mr Strauss he asked me what I would like to be done with the tumour.

‘I told him he could cut it out or blow it up with dynamite so long as he got it out of me.’

The three hour operation took place in December, he said while he does have numbness in his leg it doesn’t affect him walking, running or dancing.

He also had 70 stitches from his groin to his chest.

Professor David Nicol, chief of surgery at The Royal Marsden NHS Foundation Trust, said: ‘Sarcomas are among the rarest forms of cancer and are often very challenging to treat.

‘This is because they can affect any part of the body, sometimes grow to very large sizes and are hugely varied in terms of their symptoms and behaviour.

‘As a specialist cancer centre, The Royal Marsden sees many patients, including those with a sarcoma diagnosis, referred from across the UK, often for highly complex surgical procedures.

‘It is always wonderful seeing patients, who may have run out of other options, go on to recover after a challenging operation.’