Identifying Components of a Mixture

Chromatography is a process by which compounds within a mixture are separated. Compounds are be separated by properties such as size, and how the compounds interact with the mobile and stationary phases of chromatography. 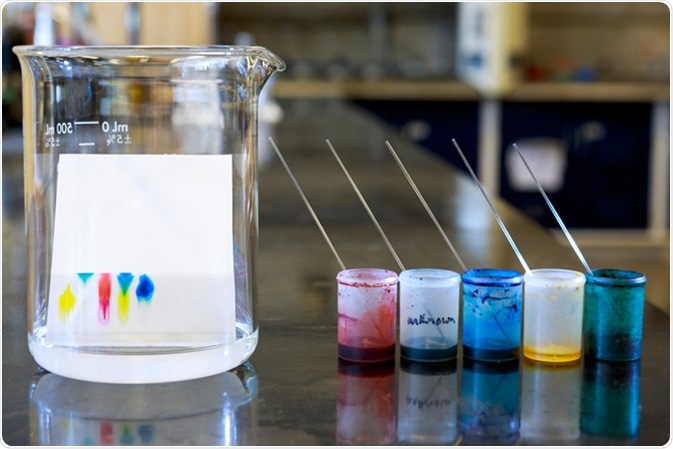 How Does Thin Layer Chromatography Work?

The stationary phase of Thin Layer Chromatography is usually silica or alumina, as mentioned above. Silica gel is composed of silicon dioxide (known as silica), where two silicon atoms are joined together by bonding with a shared oxygen atom. However, on the surface of a silica sheet, the silicon atoms are bound to an exposed OH group. This means that the surface of the stationary phase is polar. Alumina is essentially the same as silica, except it is aluminium rather than silicon which is bound to a shared oxygen or an OH group at the surface.

The polar surface means that the stationary phase is able to form hydrogen bonds (via the OH group) with compounds in the mobile phase that are capable of forming these bonds. The polar nature of the Thin Layer Chromatography sheet also means that van der Waals forces and electrostatic interactions occur between the phases too. When a compound is bound by the stationary phase, it is said to be adsorbed.

When the solvent soaks into the Thin Layer Chromatography sheet, it dissolves the sample as it passes over it. The speed at which the compounds within a sample travel up the stationary phase depends on how soluble they are, and also how they react with the stationary phase. For example, if compound A in the sample is able to form hydrogen bonds, it will be adsorbed more strongly than compound B, which cannot form hydrogen bonds. Therefore, compound B will travel up the Thin Layer Chromatography sheet more quickly than compound A, and will result in a higher spot on the chromatogram after a given amount of time.

Some compounds are colorless, so in order to view them on the chromatogram some Thin Layer Chromatography sheets have added compounds which become fluorescent under ultraviolet light (UV), therefore the plate emits light when exposed to UV light. However, the presence of a molecule prevents fluorescence, and is therefore visible as a dark spot.