Playing GOLF could cut your risk of getting dementia by a third, study claims

Retirees now have the perfect excuse to spend more time on the green — playing golf may cut the risk of getting dementia.

Men over the age 60 who did regular exercise at a ‘leisurely’ pace such as golf were up to 37 per cent less likely to be diagnosed with the disorder, a Japanese study found.

Experts believe the quick mental calculations carried out when lining up the perfect putt or avoiding a bunker may help prevent cognitive decline.

Researchers also say the social aspect of playing golf with others may also help ward off dementia, in addition to the benefits of physical exercise.

But no such protective effect was found for women who played more games of golf or other similar activities, like tennis or gardening.

Previous research has suggested factors like social isolation also increase the odds of getting dementia, with a lack of personal interaction with others highlighted as a key risk factor.

Dementia is the leading cause of death in the UK, with 900,000 Britons struck down with the memory-robbing condition.

While there is no sure fire way to prevent dementia, experts agree that maintaining a healthy heart through regular exercise and eating healthily helps slash the risk of the condition. 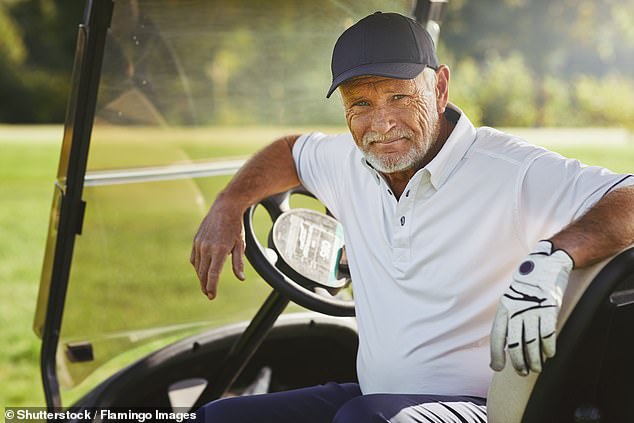 Dementia is an umbrella term used to describe a range of progressive neurological disorders (those affecting the brain) which impact memory, thinking and behaviour.

There are many different types of dementia, of which Alzheimer’s disease is the most common.

Some people may have a combination of types of dementia.

Regardless of which type is diagnosed, each person will experience their dementia in their own unique way.

Dementia is a global concern but it is most often seen in wealthier countries, where people are likely to live into very old age.

HOW MANY PEOPLE ARE AFFECTED?

The Alzheimer’s Society reports there are more than 850,000 people living with dementia in the UK today, of which more than 500,000 have Alzheimer’s.

It is estimated that the number of people living with dementia in the UK by 2025 will rise to over 1 million.

In the US, it’s estimated there are 5.5 million Alzheimer’s sufferers. A similar percentage rise is expected in the coming years.

As a person’s age increases, so does the risk of them developing dementia.

Rates of diagnosis are improving but many people with dementia are thought to still be undiagnosed.

IS THERE A CURE?

Currently there is no cure for dementia.

But new drugs can slow down its progression and the earlier it is spotted the more effective treatments are.

Nearly 5milion people in the US are also living with the disorder, which academics have spent decades, and million of pounds, trying to eradicate.

Experts at the Center for Public Health Sciences in Tokyo analysed survey data collected between 2000 to 2003 from 43,896 Japanese seniors.

The survey participants, from various areas of Japan, were asked to detail their average levels of daily activity.

Each activity was given a score, based on the energy expended doing a task.

For example sitting down had an energy score of 1.3, whereas playing golf was 3.

Scores were then compared to dementia diagnoses logged between 2006 and 2016.

A total of 5,010 participants were diagnosed with the condition during this period.

Results showed no clear link between moderate to vigorous exercise and any reduced risk of dementia.

However, further analysis of the same set of data showed men who did lots of ‘leisure-time’ exercise were at less risk of the disorder.

Men in the top 25 per cent — in terms of the amount of leisure-time exercise they carried out — were 37 per cent less likely to have dementia three years after being surveyed.

This risk reduction remained even after other risk factors like smoking status, alcohol intake and BMI were accounted for.

Nine years after being surveyed, the more active men were 28 per cent less likely to have a dementia diagnosis compared to the least active.

However, a similar protective effect was not observed for women in the study, published in the journal JAMA Network Open.

Lead author Dr Norie Sawada suggested leisure activities, like golf, may help older man stave off dementia through both the mental calculations required to play and the social aspect.

‘Leisure activities that include cognitive activity have a protective association against cognitive decline and dementia,’ they said.

‘In addition, the social activity that accompanies leisure time physical activities, such as participation in golf competitions and enrollment in tennis circles, also has a protective association against cognitive decline and dementia.’

As to why women in the study did not enjoy a reduced dementia risk, Dr Sawada theorised they may already be getting similar benefits from their everyday activities, compared to men.

This included the cognitive activity required to do housework and the fact women are likely to have a larger social network than men, they said.

NHS recommendations state adults over the age of 65 do at least 150 minutes of moderate intensity activity a week.

A single round of golf was previously calculated by the charity Macmillan Cancer Support to be equivalent to 240 minutes of moderate intensity activity, with players walking between four to eight miles on average.

Exercise is a well established way to help prevent dementia as having a healthy heart health helps reduce the risk of heart disease and stroke both potential causes of vascular dementia.

WHAT DOES THE NHS RECOMMEND FOR OVER 65S?

Adults aged 65 or older who are generally fit and have no health conditions that limit their mobility should try to be active daily, the NHS says.

A general rule of thumb is that one minute of vigorous activity provides the same health benefits as two minutes of moderate activity.

If this amount of exercise appears unachievable to start with, aiming for 10 minutes moderate exercise a day, such as brisk walking, is a good start.