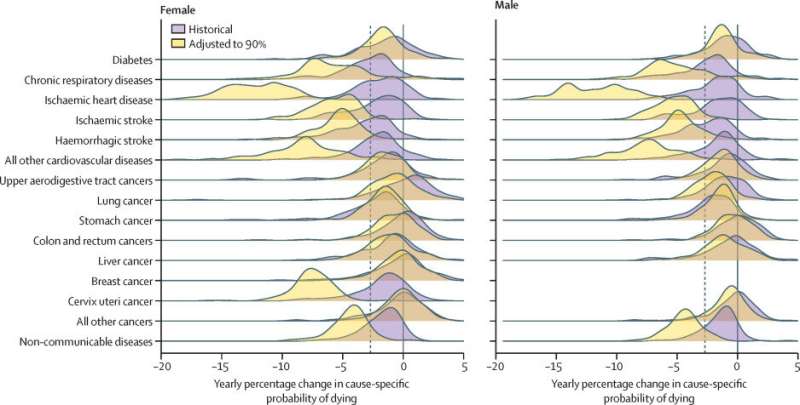 Most of the world’s countries have made little progress towards a target adopted by the United Nations in 2015, which called for the world to reduce premature mortality from non-communicable diseases by a third by 2030. Non-communicable diseases include common conditions like heart disease, cancer, chronic respiratory diseases and diabetes. These conditions are becoming more prevalent all around the world because of economic development, population aging, and other factors.

Today in a Health Policy paper in The Lancet, the Non-Communicable Diseases Countdown 2030 Collaborators present an approach to helping low-income and middle-income countries get back on track toward reaching this target, called Sustainable Development Goal 3.4. They offer guidance on types of interventions that can accelerate progress against non-communicable diseases in 123 low- and middle-income countries. They also outline the resources needed for making these interventions more widely available to the general public.

The authors of the paper say they believe that with concerted action and investment in a few highly cost-effective health interventions, most countries could achieve the global targets. They also predict that the return on investments for governments would be high in terms of lives saved and economic gains.

“The COVID-19 pandemic has shone a harsh light on the vulnerabilities of health systems around the world,” notes Dr. David Watkins, assistant professor in the Division of General Internal Medicine and the Department of Global Health at the University of Washington School of Medicine. He is the lead author on the Health Policy paper.

He worked along with collaborators from the World Health Organization in Geneva, the NCD Alliance (a nonprofit organization that advocates for reducing non-communicable diseases), Imperial College of London, and others. The full list of authors is available on the published paper in The Lancet.

Watkins points out that the pandemic has disproportionately affected people living with non-communicable diseases like heart disease, cancer, and chronic lung disease. Their medical care has been severely disrupted by pandemic control measures, and they are at higher-than-average risk of dying from COVID-19.

Watkins, who is based at the new Hans Rosling Center for Population Health at the UW, called for renewed action around the globe against these life-shortening and often debilitating disorders.

“Over the past decade, world leaders have repeatedly committed to tackling non-communicable diseases, but progress has stalled. It is time for a reset in the international agenda,” he urges.

He explains that the new report lays out a practical set of investments that national governments can make to rebuild their health systems in the area of non-communicable diseases. These investments could help achieve, or nearly achieve, a reduction in death rates from non-communicable diseases by about one-third by the 2030, the same level as specified in the United Nations target.

The greatest benefits are expected to occur in reducing deaths from heart attacks and strokes, especially through better treatment of risk factors like high blood pressure and diabetes.

The interventions, which are based on findings from the Disease Control Priorities Project (http://dcp-3.org/), include 15 clinical services and six government policies relating to taxation and regulation of tobacco, alcohol, and foods high in sodium and trans fats.

The most cost-effective mix of clinical intervention strategies might vary across countries and world regions. But addressing behavioral risks, such as tobacco smoking, harmful use of alcohol, and excessive sodium intake, would be relevant everywhere.

“Our framework is especially relevant for health policy in low- and middle-income countries,” he said, “and is meant to help governments in these countries spend their limited healthcare resources wisely.”

The authors of the policy paper estimate that the cost of scaling up these interventions worldwide would require an additional U.S. $18 billion annually from 2023 to 2030. This investment could avert 39 million premature deaths over this timeframe and generate a net economic benefit of $2.7 trillion, with the benefits outweighing the costs 19-to-1.

Paying for these interventions would likely require mobilization of additional government resources, which might be challenging in low-income countries whose budgetary shortfalls have been exacerbated by the COVID-19 pandemic.

Financing the non-communicable disease agenda, the report says, would require a mix of domestic spending by governments and catalytic aid from international development agencies, who have historically been reluctant to put money into these types of conditions.

But donor support for strengthening primary healthcare systems could simultaneously benefit both non-communicable diseases and traditional development aid targets like HIV and tuberculosis.

The authors expect the report to be influential in global health policy. On April 12t, the President of Ghana, the Prime Minister of Norway, and Director-General of the WHO are hosting an International Strategic Dialog on non-communicable diseases.

The meeting will establish a new international political compact on non-communicable diseases and will call for additional strategic investments by countries and donors. The Lancet paper provides concrete guidance and a “costed” action plan for on non-communicable that responds directly to the needs of policymakers.