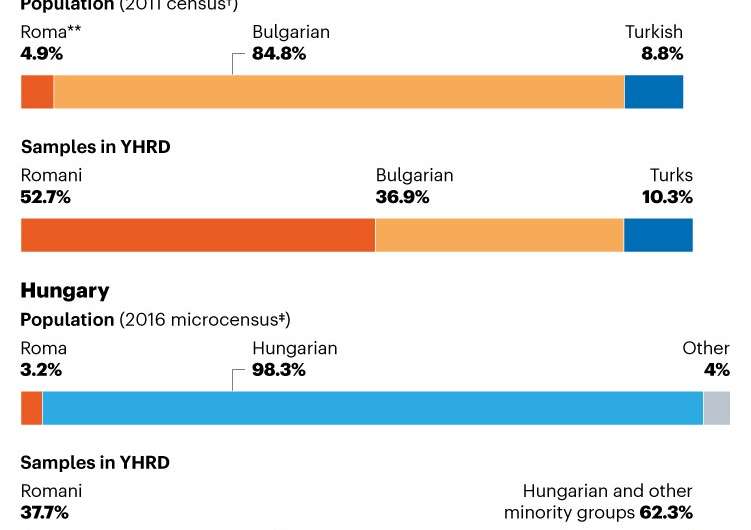 First of all, the researchers identified a fundamental problem in collecting genetic data from Roma, who are currently Europe’s largest minority group with 10 to 12 million people: Lipphardt and colleagues analyzed more than 450 papers published between 1921 and 2021, about two-thirds of which were published in the last three decades. Many of the researchers assumed that the Roma were a genetically isolated, clearly definable group originating from India, which therefore applied to all European Roma. According to Lipphardt’s team, this is an erroneous assumption with far-reaching consequences. Test persons or their DNA who come from isolated communities or localities represent only these and cannot represent larger population groups. Moreover, most Roma have not lived in isolation for centuries, but have ancestors from many different countries in Europe. “Portraying them as an isolated, foreign group could contribute to stigmatization and exclusion,” Lipphardt explains. “In addition, the recruitment of individuals, some of which was carried out in very limited areas where people live together in close communities in isolation, carries the risk of biased samples that distort scientific results and their interpretation in terms of content” adds Rappold. “Thus, this is also not a representative cross-section of Roma in Central Europe.”

The researchers also showed that two key ethical requirements are rarely met, especially in forensic genetic studies: informed consent from all subjects and approval by an ethics committee. The research team found that for many samples, records of consent from the individuals whose DNA was collected either did not exist or the procedures to obtain consent were inadequate. “In many cases, particularly in the late twentieth century, data and samples were collected from people, including prisoners, without adequate consent or record of consent, and then given to research groups or placed in public databases,” Lipphardt explains. In other cases, participants appear to have given some sort of consent, but it’s unclear whether they have actually been told what their DNA would be used for. From interviews with geneticists, the research team learned that participants in some studies were told only that their data would reveal whether they were carriers of genetic diseases, but not that their genetic information could be posted in public databases used by law enforcement, which in some cases did happen. Police departments have also uploaded their own collected data to such research databases. For example, the Freiburg researcher and her colleagues report on an example from Baden-Württemberg. The State Criminal Police Office in Stuttgart had collected data from dozens of people from Afghanistan and Romania and uploaded it to a public database in 2017 without indicating whether the individuals had consented to the use of their data.

Moreover, Roma are overrepresented in the examined public databases accessed by law enforcement agencies. In Bulgaria’s national database, for example, 52.7 percent of records are categorized as Roma, 36.9 percent as Bulgarians, and 10.3 percent as Turks, even though Roma make up only 4.9 percent of the Bulgarian population. The consequences of this overrepresentation for those affected are currently unclear. However, we know from the overrepresentation of marginalized population groups in police databases that this circumstance already stems from particularly strong surveillance and, as it were, further solidifies it.

“In our view, research and peer-review practices need to change across a broad spectrum of disciplines, from forensic genetics to molecular anthropology,” Surdu says.

Because of increased global awareness of the injustices faced by minorities, some scientists and journal editors are already trying to make changes. Last year, two journals retracted six papers that used DNA from ethnic minorities in China. In addition, Lipphardt and her colleagues say an international oversight committee needs to be established. As a first step, this committee could draw up a list of population groups for which problems with DNA data have been identified. Researchers, editors, forensic investigators, organizations, or victims could then check to see if the population they are working with or whose rights they are advocating for, is on the list. In addition, researchers should check the DNA data of suppressed groups stored in public databases.

In addition to establishing uniform ethical standards, all researchers should be required to publish the informed consent form templates they use to collect DNA data. Marginalized groups from whom scientists want to collect and use DNA would need to be involved in research projects from the outset. Scientists should engage in a two-way dialog with people about the benefits and rewards, as well as the risks, of DNA submission. These risks are different today than they were 30 years ago, when many DNA samples were collected worldwide.