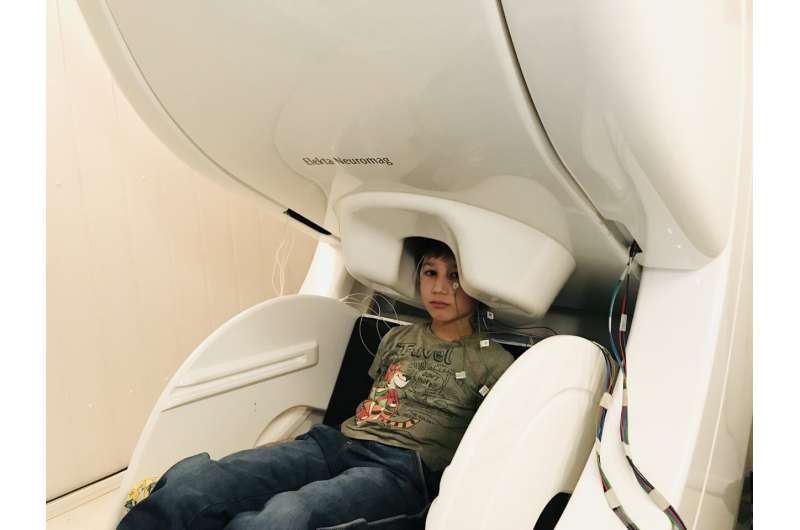 Researchers from the HSE Center for Language and Brain have identified previously unknown age-related changes in brain activity during the perception of auditory information in a group of children aged 7–12 years. The researchers used magnetoencephalography (MEG), an ultra-precise method of brain activity recording. The results obtained can be used to explore the impairments in language comprehension in children with autism. The study was published in the Human Brain Mapping.

Neurons are brain cells that communicate with each other via electrical signals. It is known that while perceiving and processing information (including acoustic information), not only the total electrical activity of neurons is significant, but also the rhythmic activity of neuron groups in different frequency ranges. Cortical gamma-band oscillations are a type of rhythmic brain activity that play a significant role in perception. Gamma rhythms are oscillations in the human brain with frequencies from 30 to 150 Hz.

Previous studies reported difficulties detecting a gamma response in young children. Scientists attribute this to the fact that this type of brain activity is associated with the inhibitory system, which matures by puberty and, as a result, the power of gamma oscillations increase with age by early puberty in children. Moreover, gamma rhythms reflect the balance between the neural excitation and inhibition in the brain, so the age-related changes in gamma power indicate the age-related changes of this balance.

Researchers from the HSE Center for Language and Brain investigated the age-related changes in the activity of gamma oscillations in the auditory cortex in 30 typically-developing primary school children (7–12 years old). The researchers used the classical Auditory Steady-State Response paradigm, presenting amplitude-modulated tones at the 40 Hz range. This paradigm enables the recording of the rhythmic activity of neurons in the auditory cortex at a frequency of 40 Hz (i.e., gamma rhythms). To record brain activity the researchers used a unique method of magnetoencephalography (MEG), which makes it possible to record the total activity of neurons in good temporal and spatial resolutions. In other words, scientists can identify how the signal flows in millisecond resolution and determine the localisation of the source of activity in the cerebral cortex.

The results demonstrated that the power of gamma oscillations in the auditory cortex changed with age: the power was higher in older children than in younger ones. In addition, the researchers have shown for the first time that the cortical localization of this activity can also change with age.

In older children, the source was located more posterior in the primary auditory cortex than in younger ones. Moreover, the researchers demonstrated for the first time that the second type of activity (the total neuromagnetic response to an auditory stimulus) in the same part of the brain also changed with age: the amplitude decreased in older children.

Finally, the results showed that the two types of brain activity were related to each other: the higher the power of rhythmic activity in the gamma range, the lower the amplitude of the total magnetic response to the stimulus. The researchers believe that all these effects are associated with age-related changes in the balance between excitation and inhibition.