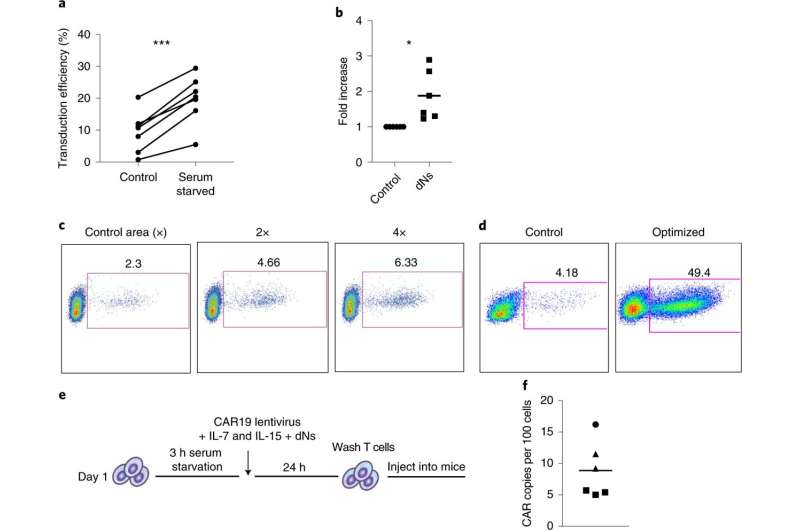 A new approach from Penn Medicine researchers could cut the time it takes to alter patients’ immune cells for infusion back into the body to find and attack cancer. The cell manufacturing process for this type of immunotherapy that was pioneered at Penn—CAR T cell therapy—typically takes 9 to 14 days. In a pre-clinical study published in Nature Biomedical Engineering, a team in the Perelman School of Medicine at the University of Pennsylvania abbreviated this process and generated functional CAR T cells with enhanced anti-tumor potency in just 24 hours.

These results demonstrate the potential for a vast reduction in the time, materials, and labor required to generate CAR T cells, which could be especially beneficial in patients with rapidly progressive disease and in resource-poor healthcare environments. The study was led by Center for Cellular Immunotherapies researchers Michael C. Milone, MD, Ph.D., an associate professor of Pathology and Laboratory Medicine and Saba Ghassemi, Ph.D., a research assistant professor of Pathology and Laboratory Medicine.

“While traditional manufacturing approaches used to create CAR T cells that take several days to weeks continue to work for patients with ‘liquid’ cancers such as leukemia, there is still a significant need to reduce the time and cost of producing these complex therapies” Milone said. “Building on our research from 2018 that reduced the standard manufacturing approach to three days, and now to less than 24 hours, the manufacturing method reported in this study is a testament to the potential to innovate and improve the production of CAR T cell therapies for the benefit of more patients.”

CAR T cell therapy is a type of immunotherapy used to fight cancer with a patient’s own altered immune cells. T cells are taken from a patient’s blood and changed in the lab by adding a gene for a receptor (called a chimeric antigen receptor or CAR). The CAR T cells are then infused back into a patient to find, bind to, and destroy cancer cells. However, when removed too long from the body during the engineering process, T cells can lose their ability to replicate, which is central to their effectiveness as a living drug. Thus, the Penn research team sought to shorten the process without sacrificing the T cell potency.

In animal models, the researchers learned that the quality, rather than the quantity, of the CAR T cell product is an important determinant of their efficacy. Their experiment provided evidence that a smaller number of high-quality CAR T cells that are generated without extensive expansion outside the body is superior to a higher number of reduced-quality CAR T cells that are extensively expanded before returning to the patient.

Traditional manufacturing approaches require T cells to be stimulated (or “activated”) in a way that induces the cells to replicate and expand in number. A key to the Penn researchers’ manufacturing approach is the lentiviral vector that delivers the CAR gene to the T cells. Lentiviral vectors, which are derived from the human immunodeficiency virus (HIV), are able to transfer genes like the CAR to cells without the need for this initial “activation” step, but the efficiency of this process was low. Using engineering approaches that built in part upon knowledge of how HIV naturally infects T cells, the Penn researchers developed a way to overcome this requirement for T cell activation and deliver genes directly to non-activated T cells freshly isolated from the blood. This had a dual benefit of expediting the overall manufacturing process while also maintaining T cell potency. Patients are not being infected with HIV through this process.

The process of engineering T cells is costly and time-intensive, since the treatment must be manufactured for each individual patient. The team hopes that cutting manufacturing time could make the therapy more cost-effective and accessible to more patients.

“This innovative approach is remarkable in that it may be able to help patients who might otherwise not be able to benefit from CAR T cell therapy such as those with rapidly progressing cancer due to significant time currently need to generate these therapies,” Ghassemi said. “Efficient reprogramming of T cells with a CAR in as little as 24 hours in a more simplified manufacturing process without T cell activation or extensive culture outside the body also offers the possibility of expanding where and when these therapies are produced. Not only might it improve the production capacity of centralized manufacturing facilities, but if simple and consistent enough, it might be possible to produce these therapies locally near the patient, which could be tantamount to addressing the many logistical challenges that impede delivery of this effective therapy especially in resource-poor environments.”

This study is a catalyst for more clinical research to investigate how the engineered CAR T cells, through this shortened approach, work in patients with specific cancers.