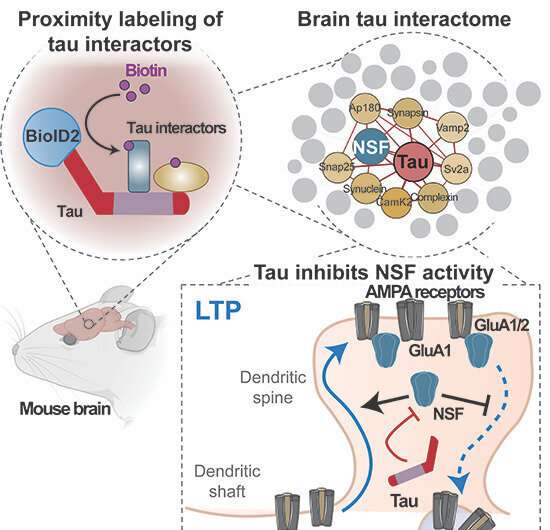 New research has revealed how the tau protein, a critical element in the formation of Alzheimer’s disease, is also involved in normal learning processes in the healthy brain—potentially providing a focal point for future drug therapies.

In the study, published in The EMBO Journal, Flinders University researchers have provided new insights into the tau protein, whose role has long been enigmatic, finding it may help molecular processes of memory formation.

Employing a sensitive method named proximity labeling, the team aimed to identify all proteins that tau comes in contact with within brain cells, labeling and identifying the whole collection of interacting proteins as they went.

Looking at the collection of proteins that interact with tau, and which specific functions these interactions support, the researchers found that while tau binds to proteins supporting brain cell structure, it also interacted with proteins that control vesicles and cell surface receptors for neurotransmitters, both necessary for learning and memory in the brain.

“Out of a wealth of partners, we identified one enzyme that critically controls neurotransmitter sensors. This enzyme, called NSF, is inhibited by tau, particularly in Alzheimer’s.”

Changes in the connections between brain cells, called synapses, underly the processes involved in formation and retention of memory. These changes happen at the molecular level and help us store and retrieve memories, such as places visited or of loved ones.

When memories form, the number of neurotransmitter receptors—sensor molecules that detect messages from other brain cells—increase in synapses. This process is controlled by several factors, including an enzyme called “N-maleimide sensitive factor,” or simply NSF.

While end-stages of Alzheimer’s have been known to neuropathologists for over a century, less well-known were how normal functions of tau may link to memory impairment at other stages in life. The new study identifies one such “starting point” where things can begin to go wrong.

“We’re quite aware of the effects of tau protein in dementia-related memory loss but what is interesting to see is that tau helps control normal memory processes,” says study lead author and Flinders University Ph.D. student Emmanuel Prikas.

After identifying NSF as a new partner of tau, the team focused on how tau specifically contributes to processes involving receptors for the neurotransmitter glutamate, using high-powered microscopic techniques and memory testing in mice.

Working with colleagues from Macquarie University to confirm how tau impacted NSF in cultured brain cells, the researchers saw that NSF was uncontrolled in cells lacking the tau protein, leading to abnormal behavior of glutamate receptors.

“By removing and reintroducing the tau protein in brain cells, we were able to attribute changes in the receptors’ behavior to changes in tau, which may become focal points for future drug therapies,” says Dr. Ittner.

Importantly, the neurotransmitter glutamate and tau have previously been implicated in seizures during epilepsy and in stroke. Thus, the new findings provide a molecular link between the normal function of tau in controlling glutamate receptors in the brain and conditions of heightened brain activity.