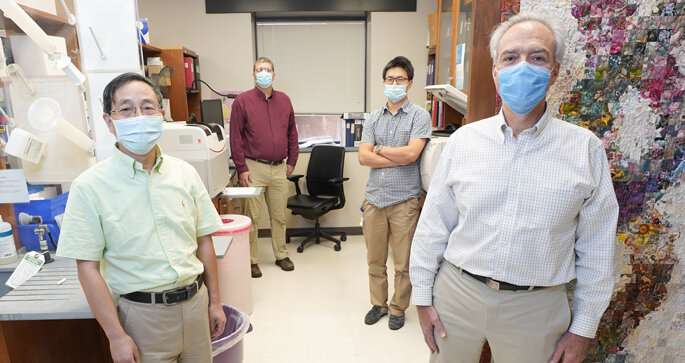 A small-molecule “scavenger” that reduces inflammation and formation of atherosclerotic plaque in blood vessels in mice potentially could lead to a new approach for treating atherosclerosis in humans, according to researchers at Vanderbilt University Medical Center.

The scavenger molecule, called 2-HOBA, reversed the damaging impact of oxidative stress, a key contributor to atherosclerosis, in a mouse model of familial hypercholesterolemia (FH), the researchers reported Aug. 14 in the journal Nature Communications.

FH is a common inherited form of high cholesterol in humans characterized by severely elevated levels of low-density lipoprotein (LDL, or “bad” cholesterol) and by an increased risk for early cardiovascular events including heart attacks and stroke.

Recent studies have shown that the function of high-density lipoprotein (HDL, or “good” cholesterol) also is impaired in people with FH, and that HDL function is an independent predictor of atherosclerosis and cardiovascular events.

In the first study of its kind, the VUMC researchers found that 2-HOBA prevented the oxidative modification of both HDL and LDL, as well as other molecules, and significantly reduced the development of atherosclerosis in mice lacking the LDL receptor that have high cholesterol levels and other characteristics of human FH.

“Treatment of the high-cholesterol mice with 2-HOBA reduced modification of HDL, improving its function, and reduced plaque formation in the arteries by up to 60% without impacting blood cholesterol levels,” said the paper’s corresponding author, MacRae Linton, MD, director of the Vanderbilt Lipid Clinic and the Atherosclerosis Research Unit.

Although statins and LDL-lowering drugs can reduce the risk of heart attack and stroke in people with cardiovascular disease, there remains a residual inflammatory risk for these and other cardiovascular events, highlighting the need for additional therapeutic approaches.

A key to improving treatment may be targeting highly reactive molecules called dicarbonyls, such as malondialdehyde and isolevuglandin, which modify LDL and HDL and impair their function.

Dicarbonyls rapidly bind to proteins forming adducts that impair protein function. Adduct formation has been linked to increased inflammation and immune cell activation, as well as plaque formation in arteries and cell death.

Dicarbonyls are produced through lipid peroxidation, a consequence of oxidative stress. Yet efforts to reduce oxidative stress with dietary anti-oxidants such as vitamins C and E have failed to reduce cardiovascular disease risk in most clinical trials.

2-HOBA is being investigated in clinical trials for its ability to protect against oxidative stress-associated hypertension, atrial arrhythmias and neurodegeneration. Phase I clinical trials have demonstrated its safety in humans.

“These studies allowed us to rigorously test our hypothesis that the scavenging activity of 2-HOBA is what provides protection,” said Sean Davies, Ph.D., a senior author of the paper and associate professor of Pharmacology.

In the current study, 2-HOBA not only reduced disease but also reduced formation of protein adducts by dicarbonyls in HDL and LDL and in atherosclerotic lesions, Davies said. Instead, dicarbonyl adducts were detected in 2-HOBA scavenger molecules excreted in the animals’ urine.

“Our studies raise the possibility that reactive dicarbonyl scavenging represents a new therapeutic approach to help reduce this residual risk for atherosclerotic CVD (cardiovascular disease) in humans,” the researchers concluded.