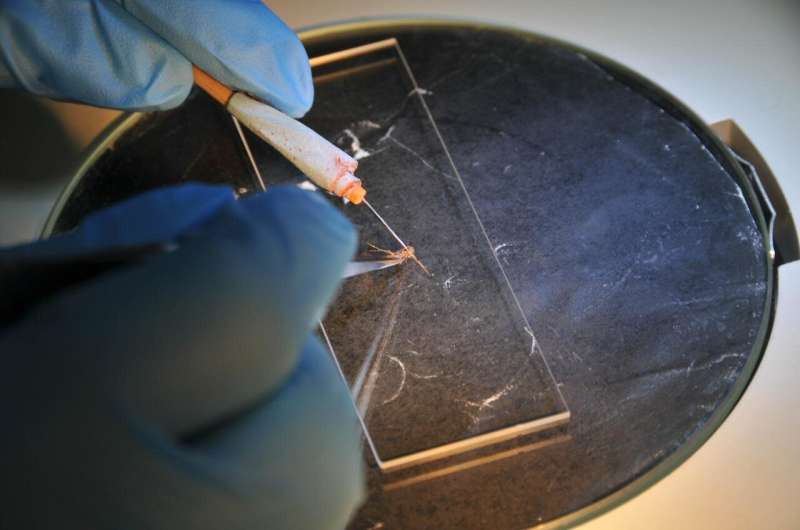 A vector refers to an organism that carries and transmits an infectious disease, as mosquitoes do malaria.

Lead compounds are chemical compounds that show promise as treatment for a disease and may lead to the development of a new drug.

Antiplasmodial lead compounds are those that counter parasites of the genus Plasmodium, which is the parasite that infects mosquitoes and causes malaria in people.

The study findings were published in Nature Communications on 11 January 2021, at a time when malaria incidence generally peaks after the holiday season.

Professor Lizette Koekemoer, co-director of the WRIM and the National Research Foundation SARChI Chair in Medical Entomology and Control, and an honorary member of the Center for Emerging Zoonotic and Parasitic Diseases, National Institute for Communicable Diseases, co-authored the paper.

Koekemoer and her team at WRIM established a unique mosquito malaria infection center in the Faculty of Health Sciences at Wits University, where the mosquito transmission blocking experiments took place.

Drugs are used to control human malaria but resistance to these drugs develops rapidly. Furthermore, the drugs mainly target just one stage of the parasite’s life cycle and are not good candidates for blocking transmission.

To expand drug suitability for malaria elimination strategies, drugs need to be able to act as a chemotype [a chemically distinct entity in a plant or microorganism] that blocks both human-to-mosquito transmission and mosquito-to-human transmission.

Koekemoer, with WRIM colleagues and co-authors, Erica Erlank, Luisa Nardini, Nelius Venter, Sonja Lauterbach, Belinda Bezuidenhout, and Theresa Coetzer conducted specialized experiments to measure the reduction of infection in the mosquitoes as well as the “killing effect” [endectocide effect] in the vectors.

The scientists screened 400 chemical compounds available in the “Pandemic Response Box”, which is supplied by Medicines for Malaria Venture (MMV), to identify the compounds that are most effective across the life stages of the parasite that generally take place in the human host.

The Pandemic Response Box contains 400 diverse drug-like molecules active against bacteria, viruses or fungi. It is available free of charge provided that researchers share data resulting from research on the molecules in the box with the public within 2 years of its generation.

The compounds that showed a good effect on late-stage gametocytes (those circulating in the blood and being transferred to a mosquito when it feeds on an infected human) were evaluated for their transmission-blocking potential.

Mosquitoes were fed infected blood that was treated either with or without the compound. After eight to 10 days, the mosquito guts [stomach] were removed and the number of parasites (called oocysts) counted and compared against those mosquitoes that received only an infected blood meal without treatment.

The World Health Organization (WHO) recommends MDA for the elimination of the Plasmodium falciparum malaria parasite. However, the effort and cost required to implement MDA on a large scale is prohibitive.

Identifying the potential compounds for MDA is amongst the greatest hurdles to overcome and is therefore an intense research pipeline of development.

By leveraging the scarce skills and expertise available in different research institutes such as the WRIM, this study published in Nature Communication established the first such pipeline screening in South Africa.

This opens the door for screening additional chemistry effectively and rapidly to contribute towards the elimination of malaria.

Although there were still an estimated 229 million malaria cases in 2019 and 409 000 deaths during this period (compared to some 88 million COVID-19 cases reported), the successes of reducing malaria cases over the past two decades has inspired many countries to commit to eliminating transmission altogether.

To date, the WHO has certified 38 countries and territories malaria-free. In southern Africa, eight countries—including South Africa—have made the elimination of malaria a policy goal.

However, progress towards eliminating transmission has numerous challenges and new drugs and insecticides are urgently needed to combat the development of drug resistance in the parasite and the vector.