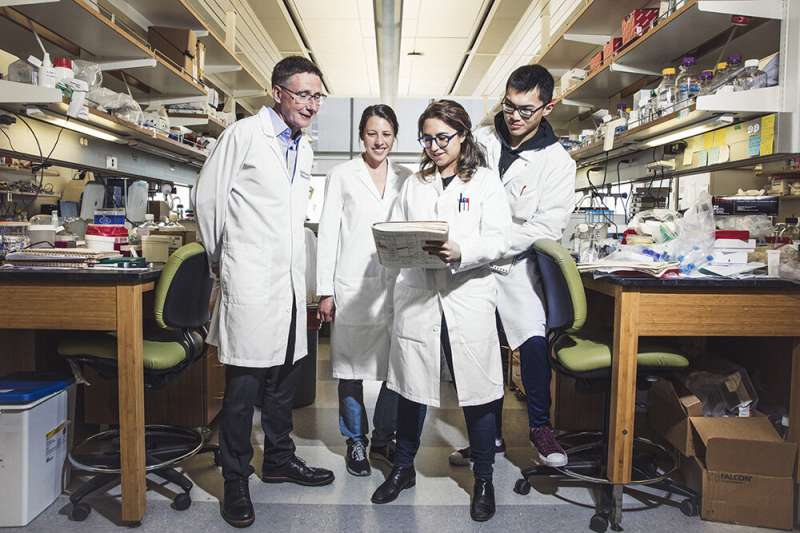 Kidney development is a balancing act between the self-renewal of stem and progenitor cells to maintain and expand their numbers, and the differentiation of these cells into more specialized cell types. In a new study in the journal eLife from Andy McMahon’s laboratory in the Department of Stem Cell Biology and Regenerative Medicine at the Keck School of Medicine of USC, former graduate student Alex Quiyu Guo and a team of scientists demonstrate the importance of a molecule called β-catenin in striking this balance.

β-catenin is a key driver at the end of a complex signaling cascade known as the Wnt pathway. Wnt signaling plays critical roles in the embryonic development of multiple organs including the kidneys. By partnering with other Wnt pathway molecules, β-catenin controls the activity of hundreds to thousands of genes within the cell.

The new study builds on the McMahon Lab’s previous discovery that Wnt/β-catenin can initiate progenitor cells to execute a lengthy and highly orchestrated program of forming structures in the kidney called nephrons. A healthy human kidney contains a million nephrons that balance body fluids and remove soluble waste products. Too few nephrons results in kidney disease.

In 2015, it became more possible to test this hypothesis when Leif Oxburgh, a scientist at the Rogosin Institute in New York and a co-author of the eLife study, developed a system for growing large numbers of nephron progenitor cells, or NPCs, in a Petri dish.

Relying on this game-changing new system, Guo and his collaborators grew NPCs, added different levels of a chemical that activates β-catenin, and saw their hypothesis play out in the Petri dishes.

They observed that high levels of β-catenin triggered a “switch” in part of the Wnt pathway that relies on another family of transcription factors known as TCF/LEF. There are two types of TCF/LEF transcription factors: one type inhibits genes related to differentiation, and the other activates these genes. In response to high levels of β-catenin, the “activating” members of TCF/LEF switched places with the “inhibiting” members, effectively taking charge. This “switch” triggered NPCs to differentiate into more specialized types of kidney cells.

When they looked at low levels of β-catenin, they saw NPCs self-renewing and maintaining their populations, as expected. However, they were surprised to learn that β-catenin was not engaged with any of the known genes related to self-renewal and maintenance.

“β-catenin does something,” said Guo. “That is for sure. But how it does it is kind of mysterious right now.”

After publishing these results in eLife, Guo earned his Ph.D. from USC, and began his postdoctoral training at UCLA. Helena Bugacov, a current Ph.D. student in the McMahon Lab and a co-author of the eLife study, is now taking the lead in continuing the project—which has implications far beyond the kidney field, due to the broad role of Wnt throughout the body.

“Understanding how Wnt regulates these two very distinct cell outcomes of self-renewal and differentiation, which is very important for kidney development, is also important for understanding the development of other organs and adult stem cells, as Wnt signaling plays important roles in almost all developmental systems,” said Bugacov. “There is also a lot of attention from cancer researchers, as this process can go awry in cancer. Many therapeutics are trying to target this process.”