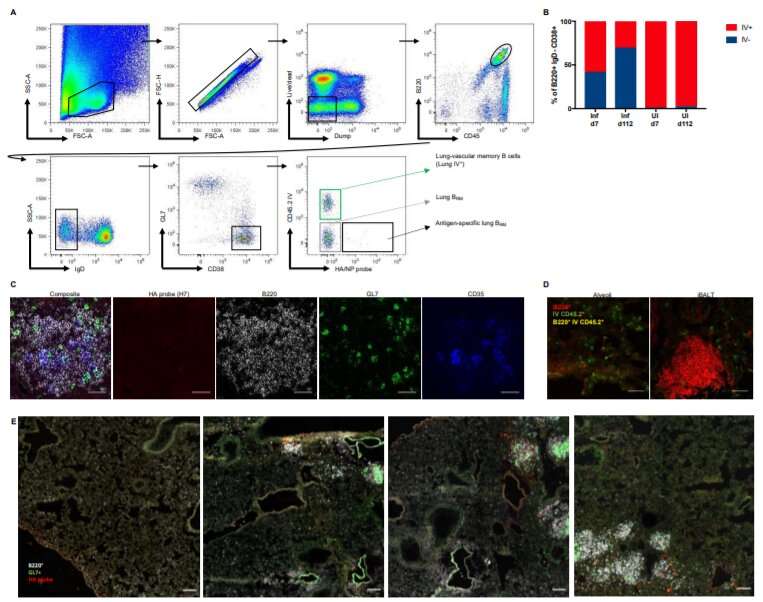 Immunologists in Australia have eavesdropped on a stowaway population of B cells that hide in the lungs, their telltale biomarkers indicating they’re armed to fight influenza—and their presence yet another sign that the mammalian immune system is still flush with surprises.

Indeed, the immune system is one of the most complex entities known to science, and while much has been learned about its intricacy, aspects of its many functions have yet to be discovered.

Scientists at the Peter Doherty Institute for Infection and Immunity in Melbourne, Australia, have tackled questions that have long vexed immunologists: Does a distinct population of B cells emerge after influenza infection, and if so, are these cells uniquely identified by specific biological signatures? The answers to both questions are resoundingly, “yes.” Yet the institute’s research didn’t end there.

As part of the same group of studies, Australian immunologists also found that these B cells are not only flu-specific, they sequester themselves in the lungs in a residential positioning that allows a strategic advantage. Should flu—or possibly any other respiratory infection—strike in the future, these stowaway B cells can leap into action more efficiently.

“Recent studies have established that memory B cells, largely thought to be circulatory in the blood, can take up long-term residency in inflamed tissues,” explained Dr. Hyon-Xhi Tan, writing in Science Immunology. A large team of investigators from the Peter Doherty Institute for Infection and Immunity worked with researchers from other Australian institutions tracing the fate of B cells to reveal how these vital immune system constituents wind up in the lungs and why they stay there.

The flu-specific B cells, the researchers found, are analogous to the already well-described tissue-resident T cells. The research suggests that B resident memory cells may be special players in B cell immunity. They stay in the lung mucosa to offer a swift response against not only influenza but possibly viral respiratory infections of all kinds. It is possible, according to Tan and colleagues, that these cells could someday be leveraged through vaccination to combat not just flu, but SARS-CoV-2, respiratory syncytial virus, and other viral pathogens that invade the lungs.

B cells, or B lymphocytes, as they are more precisely known, are part of the highly specific portion of the immune system, which includes T cells. Together, these two broad categories of lymphocytes are at the heart of the adaptive immune response. The adaptive response is interchangeably known as acquired immunity, or the humoral response, which differs from innate immunity. That broad unrestrained response is mediated by a cascade of cells and proteins. Natural killer cells are part of the innate response, as are cytokines and the explosive, uncontrolled reaction called the cytokine storm.

The innate response, which is present at birth and is the first throughout life to converge on sites of infection or tissue injury, differs from the adaptive. Emerging around the time babies enter the toddler stage, the adaptive immune response is far more targeted and specific.

B cells, for example, can form memories of previous infections and also produce antibodies. Memory B cells recognize antigens from earlier infectious assaults on the body. They differentiate into antibody-producing plasma B cells when the antigen is again encountered and a rapid antibody response is required. The first time a B cell encounters an antigen, it can take up to 15 days to produce sufficient neutralizing antibodies to quell the pathogen. The second time the same pathogen is encountered, memory B cells, which morph into antibody-producing plasma cells, respond in as few as five days and flood infiltrating pathogens with 100 times more antibodies than during the first encounter.

To find out more about B resident memory cells, Tan and colleagues turned to a mouse model that allowed them to study in intricate detail the origins and activities of B cells that take up residence in the lungs. To seek answers, the Doherty Institute team worked with immunologists and biologists from the Australian Organ and Tissue Authority and the Walter and Eliza Hall Institute of Medical Research, both in Australia.

The stowaway B cells that researchers discovered are located in bronchus-associated lymphoid tissue in the lungs of mice and express the lung residency marker proteins CXCR3, CCR6, and CD69. The team additionally studied human cell lines to further their analyses of these critical cells, and again found resident B cells as stowaways in the lungs.

“These data suggest that B resident memory cells may constitute a discrete component of B cell immunity, positioned at the lung mucosa for rapid humoral response against respiratory viral infections,” Tan wrote in Science Immunology.

The investigators found that B resident memory cells have distinct transcriptional signatures in both mice and humans that differ from regular memory B cells in the blood or spleen.