The discovery of DNA structure by James Watson and Francis Crick in the year 1953 is one of the most revolutionary scientific discoveries to date. However, the research leading to the discovery of nucleic acid structure started several years previously and involved many different researchers across the world.

It was in 1869 that Swiss biochemist, Frederich Miescher was the first to identify DNA as present inside the nuclei of lymphocytes. However, the importance of the molecule was not realized until more than 50 years later. In 1919, Russian biochemist, Phoebus Levene proposed that nucleic acids are made up of nucleotides, which are composed of one of the four bases – A (adenine), T (thymine), G (guanine) and C (cytosine); a sugar and a phosphate group.

The Austrian biochemist Erwin Chargaff, inspired by Oswald Avery’s 1944 paper on DNA as genetic material, launched a research project focused on the chemistry of nucleic acids in the 1950s. Based on his observations about the amount of bases in DNA, he framed the Chargaff’s rule, which states that the total amount of purines (A + G) is nearly the same as the total amount of pyrimidines (C + T). The combination of Levene's findings and the crucial X-ray crystallography work on DNA structure by Rosalind Franklin and Maurice Wilkins, laid the foundations for the groundbreaking discovery of the double helix structure by Watson and Crick in 1953.

In 1962, Watson, Crick, and Wilkins jointly received the Nobel Prize in Medicine "for their discoveries concerning the molecular structure of nucleic acids and its significance for information transfer in living material."

DNA consists of 2 polynucleotide chains or strands, wound around each other such that they resemble a twisted ladder. This structure is referred to as the double helix. The backbone of each of these strands is a repeating pattern of a 5-carbon sugar and a phosphate group. Each sugar is attached to one of the four nitrogen-containing bases: A, T, G, or C.

Adenine and thymine are paired by two H bonds, whereas cytosine and guanine are paired by three H bonds. The bases are stacked up the ladder and the hydrophobic bonding between the bases gives the DNA molecule stability.

The two DNA strands in the double helix run in opposite directions (antiparallel to each other) to help the bases in each base pair fit into the double helix. This means the nucleotides in each strand of DNA are exactly complementary to that in the other strand.

The complementary base-pairing of A with T and G with C enables optimization of energy levels within the double helix. In this double helix arrangement, the width of each base pair remains the same, meaning the same distance is kept between the sugar-phosphate backbones, along the length of the DNA molecule. The twists or turns in the two sugar-phosphate backbones of the double helix occurs every ten base pairs, which maximizes efficiency of the base-pair packing.

The two polynucleotide strands of the DNA double helix provide a simple basis for copying the information in the molecule. On separation, each of the two strands serves as a template for creating an exact or identical copy of the DNA molecule. 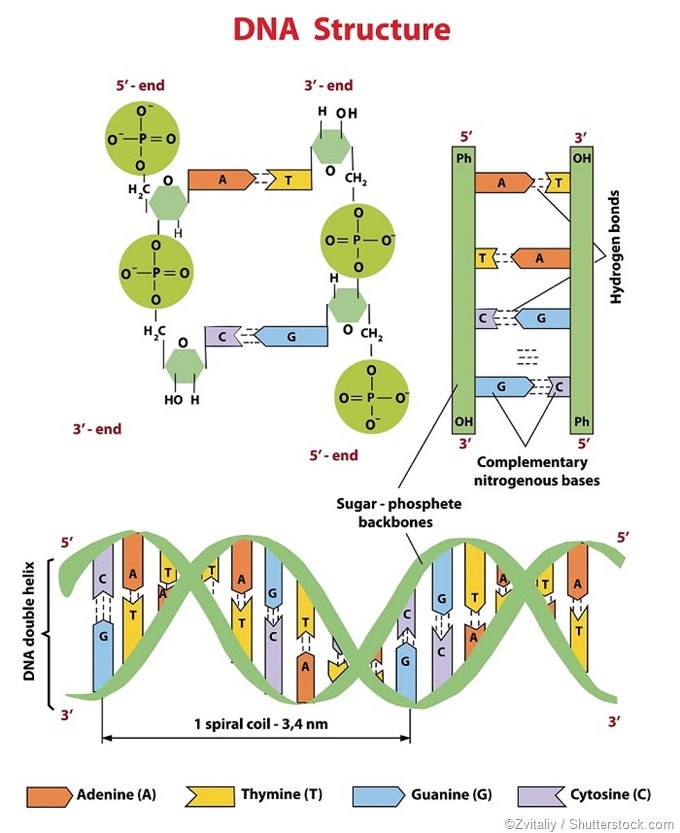