You may not think that children with attention deficit hyperactivity disorder, or ADHD, have a lot in common with older adults.

The kids struggle to sit still and focus on a task. The older adults are great at sitting still, but they often have a hard time following the conversation at a holiday dinner.

In both cases, the problem is one of attention.

Yes, that’s obvious for someone who’s been diagnosed with ADHD. It’s right there in the name. With ADHD, the brain is constantly searching for new and interesting ways to distract itself.

But older adults aren’t searching for distractions. They just can’t ignore the distractions that find them.

“Focusing attention has two sides: focusing and ignoring,” says Adam Gazzaley, MD, PhD, a professor of neuroscience at the University of California, San Francisco. “It’s the act of filtering out irrelevant information that declines with aging.”

That’s why Gazzaley invented EndeavorRx, a therapeutic video game you may have heard of, especially if your child has ADHD. In 2020, the FDA approved EndeavorRx to treat kids with ADHD between the ages of 8 and 12, making it the first digital therapy to get the green light for any condition.

How Video Games Work Like Exercise for Your Brain

This adaptive quality is the key to EndeavorRx and what makes it different from commercial video games. Gazzaley calls it an “adaptive closed-loop algorithm.”

Put simply, the game adjusts to the player. Better players encounter tougher challenges, while those with less skill can still work through the game’s levels and unlock its rewards.

Your brain, in turn, adapts to the challenges with structural changes, not unlike the adaptations your body makes when you exercise.

Just as your muscles respond to strength training by getting bigger and stronger, your brain adapts to challenges by forming new connections between and within neural networks. It works the same for all ages, whether you’re an older adult who’s never played a video game or a young person who’s possibly played too many. (It’s worth noting that too much gaming can hurt your mental health.)

The brain’s ability to adapt to new information, circumstances, or demands is called neuroplasticity, and it’s the key advantage that experiential medicine has over drug treatments. Changes in the brain not only translate to real-life improvements in attention, but they also remain intact after the patient has finished their prescribed time with the game.

“It just sticks, which is incredibly different from how drugs work now,” Gazzaley says.

Treating kids with ADHD is just one of many potential applications.

“The game has no specificity toward a particular pathology or age group,” Gazzaley says. “It challenges the brain in such a way that it leads to this benefit in sustained attention in any population we’ve ever tested.”

Case in point: He and his colleagues at UCSF have now tested closed-loop games with people who have depression, multiple sclerosis, and lupus, all of which may affect the ability to focus.

But it all started with one very specific population.

In the early 2000s, Gazzaley worked with older patients who were having problems with their thinking skills for the first time.

“They would often tell me they were distracted,” he says. “They just couldn’t hold their attention.”

That led to a series of studies on the source of the problem. In a study published in 2005, for example, his research team found that older adults could focus on a task as well as 20-year-olds.

“What they were failing to do was ignore,” he explains. “There’s so much irrelevant information that needs to be filtered out. That’s what was causing the impairment.”

A subsequent study that was published in 2008 found that the impairment was worsened by a slowdown in the brain’s processing speed. It took older adults longer to decide if an interruption actually required their attention, which meant each distraction was more disruptive than it would’ve been to their younger selves.

For seniors, those challenges are especially apparent when they try to multitask, when you rapidly redirect your attention from one thing to another. The ability to multitask typically peaks around your 20th birthday and declines throughout life.

That was the focus for Gazzaley and his game development team at UCSF when they published their initial findings in a landmark study in 2013.

And that wasn’t all. The people in the study also improved their thinking skills in areas that weren’t targeted: sustained attention and working memory. It was the first evidence of the potential for therapeutic video games to target and enhance those abilities. But it wouldn’t be the last.

Which brings us back to kids with ADHD.

Is There a Therapeutic Video Game in Your Future?

Working memory – the ability to retain information long enough to use it – is a key to success in school, work, and everyday life. Like the ability to focus attention, it’s a higher-level executive function, which means the two processes share some of the same neural networks in the same parts of the brain. Not coincidentally, working memory deficits are one of the hallmarks of ADHD. 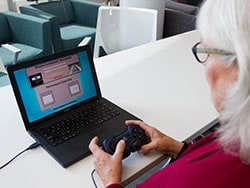 But so does playing video games, according to a recently published study. Nine- and 10-year-olds who played commercial video games for several hours a day had better working memory and response inhibition – stopping themselves before allowing a distraction to pull them off task – than kids who never played.

“We saw linear effects in pretty much everything we looked at,” says Bader Chaarani, PhD, an assistant professor of psychiatry at the University of Vermont and the study’s lead author.

“Light gamers who played on average 1 hour per day showed the same improvements in cognition, response inhibition, and working memory, compared to those who never played video games,” he says. “These effects were intermediate between non-video gamers and the heavy video gamers.”

This helps explain why video games are getting so much attention in neurological, medical, and psychological research.

In addition to EndeavorRx, Gazzaley and his team have developed several others for different populations and preferences.

Body-Brain Trainer, another game created for seniors, combines cognitive training with exercise, using the closed-loop algorithm to adjust both interventions to the user’s ability. Those who used the game for 8 weeks improved in two fitness measures (blood pressure and balance) as well as in their ability to sustain attention.

Gazzaley plans to explain in a future study how games with such different mechanics and tempos — from an obstacle-dodging run to drumming to slow-paced meditation — lead to similar improvements in attention.

Again, that’s similar to exercise, where almost any kind of training will lead to improvements in heart health, which in turn reduce the risk of premature death from any cause.

Because there are so many ways to get to the same destination, you can find effective exercise programs to fit just about any combination of abilities and preferences. You can also advance through a fitness program at your own pace.

That may be how we use therapeutic video games as the category develops.

“Now that we have so many types of games and so many populations, we’re getting a richer understanding of how you can push and pull these systems to get these outcomes,” Gazzaley says. “That’s what makes me so excited about the future.”

Games as medicine? Seems worth paying attention to.