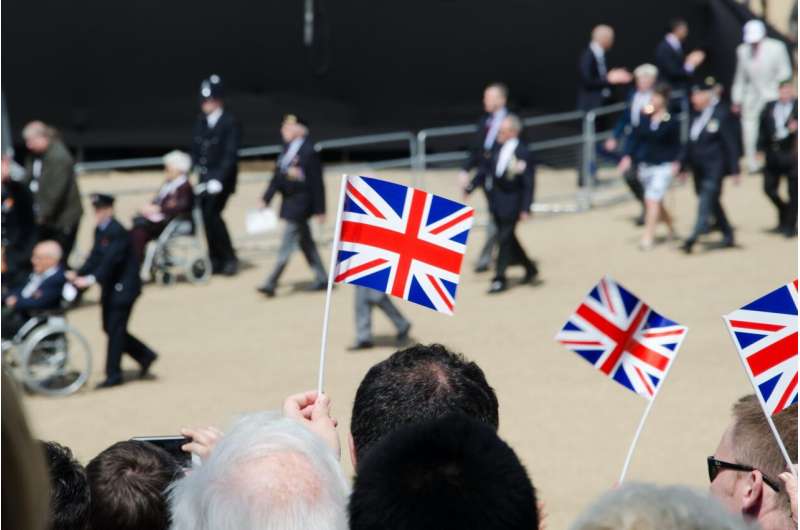 Military men who had been present when British nuclear weapons were tested in the 1950s and 60s are no more likely to pass on to their descendants more changes to their DNA in comparison to other veterans, a new study involving University of Bristol researchers, has found.

The study, published in the journal Scientific Reports, set out to see whether or not the amount and type of genetic changes seen in the children of nuclear test veterans, when compared to their parents, is as would be expected in families more generally.

The findings are from the first study looking into whether there is a genetic legacy associated with having been present at the test sites, including Christmas Island and the Australian outback.

To study this, researchers analyzed blood samples from 30 family trios: the father, the mother and their surviving biological child conceived soonest after the father returned from nuclear test sites. For comparison purposes, samples were analyzed from a matched control group of 30 family trios of veterans of similar age and military service who hadn’t been at test sites. All were invited to the study through their GPs in a multi-step recruitment process.

The team found that, for each comparison, the number and type of genetic changes were in line with what would be expected naturally, with no significant differences between the nuclear test veteran and control groups.

Dr. Rhona Anderson, the study lead from Brunel University London, and Director of the Center for Health Effects of Radiological and Chemical Agents, said: “Our study showed no significant increases in the frequency of newly arising genetic changes in the offspring of nuclear test veteran fathers. This result should reassure the study participants and the wider nuclear test veteran community.”

Dr. Alex Moorhouse, now based at the University of Bristol’s School of Cellular and Molecular Medicine, carried out the whole genome sequencing analysis while at the University of Leicester, said: “This is the first study of the transgenerational genome wide mutational risk in the human germline as a result of exposure to ionizing radiation. It is an important epidemiological study, particularly for the British Nuclear Test Veterans who participated at the nuclear test sites, and for their families.”

Dr. Moorhouse and colleagues from the University of Leicester, led by Professor Yuri Dubrova, extracted DNA from each sample and sequenced and analyzed the whole genome, producing a readout of each participant’s genetic information. All the samples were processed blind, so the research team didn’t know whether they were analyzing blood from a nuclear test veteran or control family trio. Comparing the readouts between the generations meant the researchers could identify different types of newly arising germline genetic changes, such as when building blocks of DNA swap places or are deleted, and then count them.

Once the samples were revealed as being part of the veteran group or control group, the study team, which included researchers at the London School of Hygiene & Tropical Medicine, were able to make comparisons.

A paper published earlier this month by the researchers revealed that a higher proportion of the nuclear test veterans in the study said that at least one of their children or grandchildren had been born with a congenital anomaly—sometimes known as birth defects, such as of the heart or of the limbs—and that a higher proportion of control veterans reported chemical or radiation exposure through their jobs.

However, these differences are not explained by the genetic analysis carried out on the family members studied in these two groups.

Professor Dubrova added: “Overall, our findings may reflect the low radiation doses thought to be received by the nuclear test veterans. Another consideration is the time gap between the date of last attendance at a test site and when the next child was conceived.”