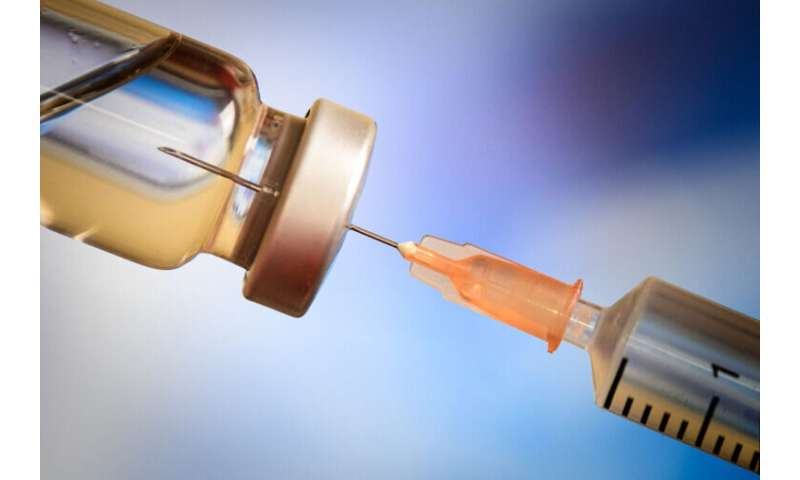 In this age of coronavirus, with vaccine experimentation moving at historic pace to the clinical trials phase, the ideal inoculation policy would emphasize age more than work-exposure risk, according to a study involving Washington University in St. Louis economists.

There are numerous facets and factors to their modeling, including stay-at-home orders—with or without designating certain occupations as essential—that try to limit the possible spread of workplace infection.

For the most part, though, they found the key that unlocks the mystery to potentially optimal vaccine distribution is age: While all employed people age 60-plus would receive the vaccine, in many occupations people would receive the vaccine starting from age 50. In fact, the largest volume of vaccines would be allocated to populations ages 50-59, due to its group size, followed by 60-69.

As the researchers focused across the occupation spectrum and not merely age or exposure risks, they found that a 50-year-old food-processing worker would be equally prioritized as a 60-year-old financial advisor.

“We expected that age would be a driving factor in allocating vaccines,” said Ana Babus, assistant professor of economics in Arts & Sciences and co-author of “The Optimal Allocation of COVID-19 Vaccines.” “But we have also learned that it may be better to vaccinate, say, a 50-year-old bus driver instead of even a 30-year-old health-care worker, when vaccine doses are limited.”

Furthermore, they discovered that designating some occupations as essential doesn’t affect optimal vaccine allocation unless a stay-at-home order also is in effect.

COVID-19 won’t die with the first emergence of a vaccine, they learned.

Even if a limited vaccine were allocated optimally, their model showed that 1.37% of the employed workforce still would be expected to get infected until a vaccine becomes widely available. That means if, say, the United States used 60 million vaccines on only current members of the workforce, some 2.5 million workers ultimately would get infected. And these numbers are based on a vaccine that’s 50% effective.

A vaccine that’s 70% effective could cut that number of 2.5 million infected-workers only by 8%, to 2.3 million, they found.

“We easily agree to prioritize high-risk populations,” Lee said. “However, risk level isn’t one-dimensional—it’s exposure and mortality—and putting one person ahead of another by risk isn’t so obvious. The goal of our study is to find which risk dimension to emphasize more.”

While a recent history of vaccinating U.S. schoolchildren greatly decreased the transmission of flu, COVID-19 is a different animal. It kills older adults in far greater numbers, as well as the underrepresented. In this case, the study attempts to provide a best-practice scenario to supplement a vaccine distribution strategy with a targeted stay-at-home order preventing certain age-occupation groups from returning to their workplaces and spreading infection.

They factored a worker’s contribution to output as measured by GDP, infection fatality rate and age. Using the United Kingdom’s Office for National Statistics data between March and May, they were able to infer the infection deaths for each occupation group. They related that to U.S. occupations, particularly considering physical proximity—lack of social distance at work—means higher infection risk.

They conducted three exercises plugging the data into their model. In essence:

The stay-at-home orders in their experimentation lasted two months.

The results: In exercises Nos. 1 and 2, the 50-59 and then 60-69 age groups presented the largest volumes of vaccine allocation. In exercise No. 3, the largest age group was 30-39. In the latter sample, teachers taught online from home and more, younger health-care workers were able to get vaccinated.

Remove any stay-at-home order, the researchers determined, and all employed people age 60-plus could receive the vaccine.

If more occupations work from home, and workers 70-plus were mandated to stay at home, that would allow vaccines to be distributed to, say, nurses and food-preparation workers as young as 20-plus, the researchers found.