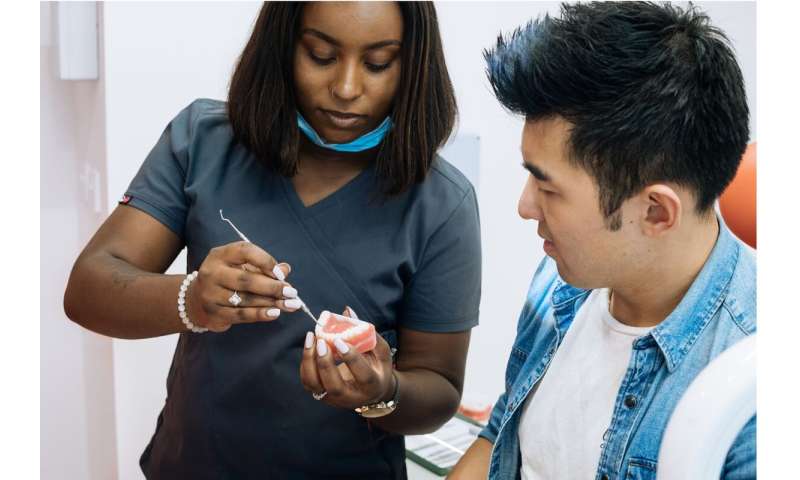 More than one in four adults in California report having poor oral health, but that figure rises to roughly one in two for the state’s lowest-income residents and drops to one in five for those with the highest incomes, according to a UCLA policy brief that looks at the role economic, social and environmental factors play in oral health.

The research, conducted by the UCLA Center for Health Policy Research, highlights significant differences in residents’ oral health across income, education, employment, immigration status and other categories, revealing the crucial influence of social determinants and illustrating that poor oral health is not simply a result of lack of access to dental care.

“Few studies have examined the role of social determinants of oral health,” said Nadereh Pourat, lead author of the study and an associate director at the center. “Our study found striking disparities in oral health status when we examined a broad array of socioeconomic and environmental factors, with income being the most influential of these indicators.”

Using data from the center’s 2017 and 2018 California Health Interview Survey, the authors found that poor oral health was more common among adults who had no dental insurance (32%) or Medi-Cal (42%) vs. those with private insurance (16%); those with no college education vs. college-educated residents (36% vs. 15%); immigrants vs. U.S.–born residents (37% vs. 22%); those with limited English proficiency vs. English-proficient residents (29% vs. 22%); those who were food-insecure vs. those who weren’t (36% vs. 24%); and those who lived in neighborhoods they considered unsafe vs. those in safe neighborhoods (39% vs. 26%).

The authors found that disparities further widened when the oral health of poorest Californians was compared with that of their higher-income counterparts across many of these actors. (Adults with incomes at or below 138% of the federal poverty level were considered to be in the lowest-income group, while those with the highest incomes were at or above 250% of the FPL). Poor oral health was more pronounced among those in the lowest-income group in variety of categories, including:

Other findings indicate that poor oral health is more common among older people, men and those from communities of color, with Native Hawaiians and Pacific Islanders, Latinos, and American Indians and Alaska Natives reporting significantly higher rates of poor oral health than whites.

The researchers recommend applying strategies similar to those used to reduce oral health care disparities among children, such as oral health education and preventive services, for adults. This approach includes deploying community health workers to help patients navigate services or secure affordable services, as well as integrating oral health into general efforts aimed at improving the health of disadvantaged groups.

“Oral health should be included in screening tools for social needs,” said Maria Ditter, co-author of the study and research scientist at the center. “This can be followed by providing oral health services to meet those needs by collaborating with providers and community-based organizations and bringing all necessary stakeholders to the table to address oral health needs.”

Californians’ oral health differs based on where they live

The policy brief is accompanied by an infographic that shows the proportion of residents with poor oral health in each California county and identifies those who are among the lowest-income group and from communities of color.