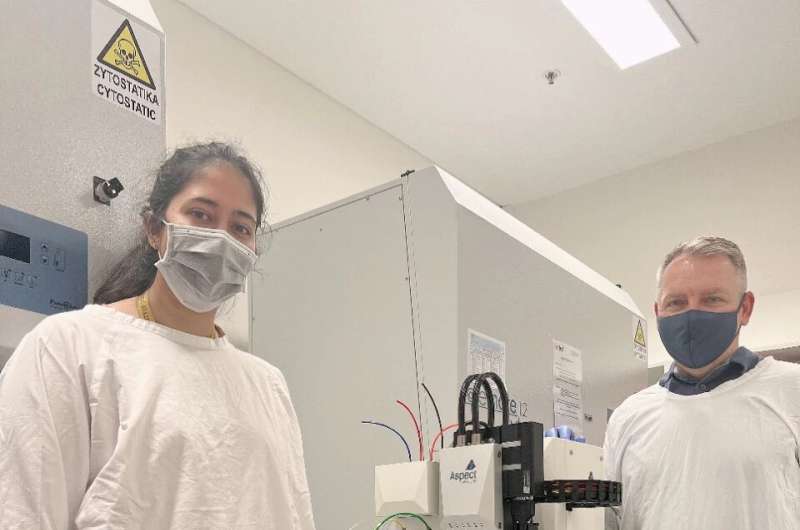 Led by the University of Sydney, an international team has developed a new kind of bone implant that reduces the chance of infection, and therefore significantly decreases implant failure rates. In Australia, a fifth of conventional hip and knee replacements fail after 10 years.

New bone implants that simultaneously reduce inflammation and prevent biofilm (microorganism) build up, which can ordinarily lead to infections and implant failure, have been developed by an international team led by the University of Sydney.

Conventional orthopedic implants, which replace missing bone or support damaged bone, are becoming more common in Australia due to our aging population with osteoporosis, who have increasing access to surgery. In 2020 for example, over 1.7 million joint replacement procedures were performed. Yet implants have a significant failure rate—the average failure rate for hip and knee replacements at 10 years is around 20 percent. This failure can result in a patient experiencing unnecessary pain, as well having to undergo revision surgery at a significant cost to them, their families, and the healthcare system.

The safer, organic implants developed by the University of Sydney-led team are estimated to reduce the implant failure rate to below one percent.

They are enriched with gallium (a safe and highly antimicrobial chemical element), and defensin—a naturally occurring antimicrobial biomolecule in our body. The researchers added the gallium and defensin to poly-lactic acid (PLA), a commonly used implant material. PLA is a biodegradable plastic, derived from renewable resources such as corn starch, tapioca, or sugar cane.

The gallium was added using a megavolt particle accelerator at the Australian Nuclear Science and Technology Organisation (ANSTO)’s Centre for Accelerator Science—gallium ions were shot into the surface layers of the implant.

“It is fantastic to see accelerator physicists and biomaterials scientists working together to design materials of the future for this inspiring application,” said Dr. Ceri Brenner, Leader, ANSTO Centre for Accelerator Science.

An overview of the experiment has been published in ACS Applied Materials & Interfaces. 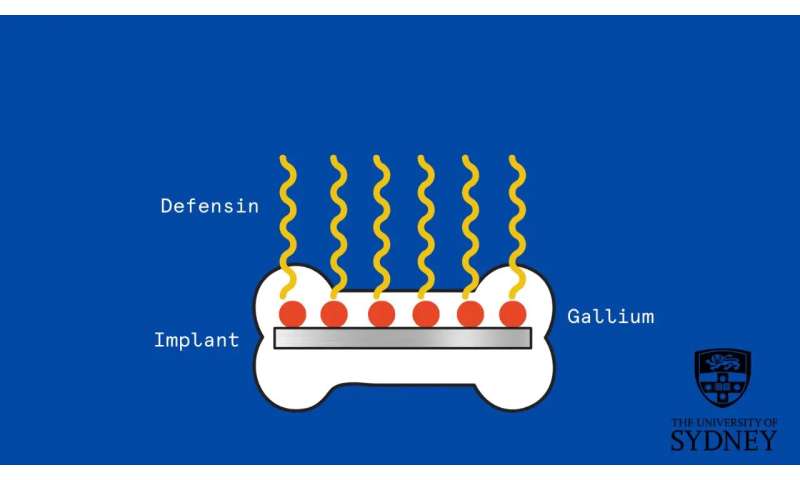 “Gallium is an undercover agent that can be used to combat infection,” said lead author, Professor Wojciech Chrzanowski, from the University of Sydney Nano Institute and head of nanomedicine research at the Faculty of Medicine and Health.

“Gallium looks like iron and can exploit bacteria’s need for iron to trick them into taking it up. Once inside bacterial cells, gallium destroys them.

“So, in the case of bone implants, which are highly susceptible to infection as foreign substances are introduced into the body, gallium is a superhero substance. Defensin, a kind of protein, is also active against bacteria (as well as fungi and some viruses) and is a natural part of our immune systems,” he said.

Gallium and defensin together reduced the rate of surface bacteria on bone by almost 90 percent, compared to a control.

Additionally, both defensin and gallium reduced long-term inflammation by 45 percent, by decreasing immune cells’ reaction to the implant. The bone surfaces showed an increase in short-term inflammation, however, which is thought to initiate healing.

University of Sydney Ph.D. student and research co-lead Kamini Divakarla said: “Since we used biodegradable PLA, the coating will degrade when it has served its infection-prevention purpose.”