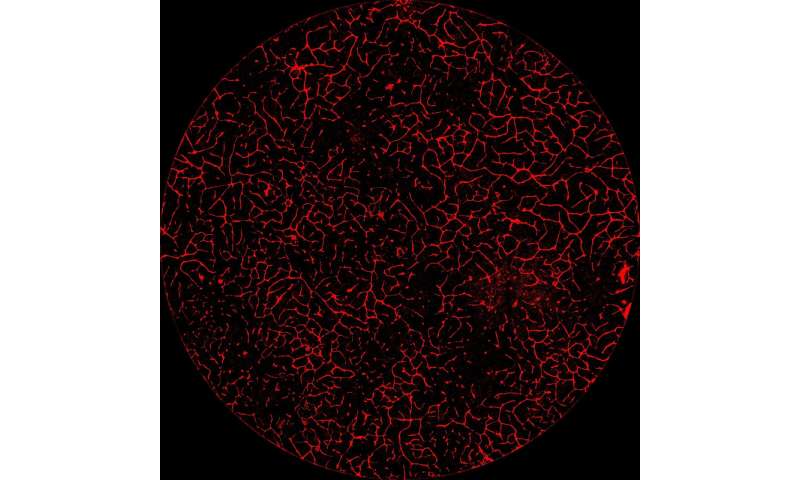 Researchers at the University of Pittsburgh School of Medicine have combined synthetic biology with a machine-learning algorithm to create human liver organoids with blood- and bile-handling systems. When implanted into mice with failing livers, the lab-grown replacement livers extended life.

The study, published today in Cell Systems, shows that it’s possible to trigger and speed up the maturation of a lab-grown organ without sacrificing precision or control.

“Pregnancy is nine months—it takes that long and even months after birth for new organs to mature—but if a person needs a liver, they may not be able to wait that long,” said study author Mo Ebrahimkhani, M.D., associate professor of pathology and bioengineering, and member of the Pittsburgh Liver Research Center and the McGowan Institute for Regenerative Medicine. “We showed it’s possible to get human liver tissue with four main cell types and vasculature in 17 days. We can mature tissue almost to the third trimester in only three months.”

Other groups have attempted to coax organoid maturation in a dish using growth factors, but it’s expensive, inconsistent and prone to human error, Ebrahimkhani said. Often, there are unwanted tissue or cell types—such as intestine or brain cells growing in the middle of what should be solid liver.

Using genetic engineering is cleaner but also more complex to orchestrate. So, Ebrahimkhani partnered with Patrick Cahan, Ph.D., at Johns Hopkins University to use a machine-learning system that can reverse engineer the genes necessary for human liver maturation.

Then, Ebrahimkhani together with his collaborator at Pitt, Samira Kiani, M.D., applied genetic engineering techniques, including CRISPR, to turn a mass of immature liver tissue—originally derived from human stem cells—into what the team calls “designer liver organoids.”

The more mature the organoids got, the more capillaries and rudimentary bile duct cells snaked their way through the thin sheet of tissue, and the more closely the function of the tiny organ rivaled its full-size natural human model. Energy storage, fat accumulation, chemical transport, enzyme activity and protein production were all closer to adult human liver function, though still not a perfect match.

Ebrahimkhani imagines designer organoids having three main uses: drug discovery, disease modeling and organ transplant. Since the stem cells can come from the patient’s own body, lab-grown organs could be personalized, so there would be no threat of immune rejection.

When transplanted into mice with damaged livers, Ebrahimkhani’s designer liver organoids successfully integrated into the animals’ bodies and continued to work—producing human proteins that showed up in the animals’ blood and prolonging the animals’ lives.

This is a proof-of-principle to show that it’s possible, Ebrahimkhani said. The technique could potentially go much further.