The increased availability of telemedicine was associated with improved access to primary care for Black patients in 2020, according to a new study from the University of Pennsylvania. 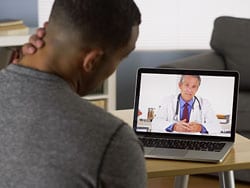 The study was published online May 2 in Telemedicine and e-Health.

Prior to the pandemic-related shutdown of many physician practices in March 2020, the study said, Black patients completed 60%-63% of primary care appointments and non-Black patients completed 72%-73% of their appointments. At the end of 2020, the appointment completion rate for Blacks was approximately 68% and that for non-Blacks was still about 72%, lead study author Krisda H. Chaiyachati, MD, MPH, told Medscape Medical News.

As the study noted, Black patients traditionally have had less access to primary care than White patients. “[Black patients] are more likely to reside in areas with a low supply of primary care providers, encounter insurance barriers, spend more time traveling to medical appointments, and have work or family obligations that limit their ability to complete scheduled appointments,” the study authors write.

Early in the pandemic, there were reports that fewer Black persons than White persons were using telemedicine, especially video visits, the study observed. For example, a University of Houston study of appointments at 55 federally qualified health centers found that Black patients were 35% less likely to use telemedicine compared to White patients. The authors explained this by noting that Black people had less access to computer devices and the internet than White people did.

Phone Visits a Lifeline For Many

The ability of many Black patients to have telemedicine visits was related to Penn Medicine’s use of audio-only visits as well as audio-visual encounters. Black and White patients had similar percentages of video visits, but more Black patients had phone visits with their providers.

“Black patients completed a larger share of audio-only visits, with these visits accounting for a sizable share of completed primary care appointments in 2020, compared to 2019 among Black patients,” the study notes.

If the phone visits had been stripped out of the data, Chaiyachati explained, “video visits alone would have brought primary care visits up to the 2019 level of visit volume. I think the phone visits push it above that level [for Black patients].”

The phone visit volume, he added, tapered off over the year. “One reason is that primary care practices were pushing patients toward audio-visual visits, which they were more likely to get paid for. Also, people started becoming more comfortable and savvy with video visits.”

If more Black patients had access to the technology and help in learning to use telemedicine, he said, it’s likely that the primary care access gap between Blacks and non-Blacks would narrow further.

“A lot of the literature shows there was less uptake of telemedicine among Black and minority patients relative to others,” said Chaiyachati, an assistant professor of medicine at Penn Medicine. “Part of that is because of lack of access to devices and lack of familiarity with telehealth tools.”

Showing Up Is Easier With Telehealth

Another component of primary care access is showing up for appointments. This may be difficult for people who can’t take time off from work, have challenges at home, or lack transportation. Therefore, no-shows are very common, especially among Medicaid patients.

The Penn study, said Chaiyachati, revealed that when telehealth was available, patients who couldn’t travel to the clinic were able to have telehealth visits at work or at home.

One other finding was a bit more puzzling: After the initial shutdown period because of the pandemic, when people started returning to primary care offices, in-person completed, canceled, and no-show rates for non-Blacks neared 2019 levels. But for Black patients, in-person appointment completion increased and no-shows decreased.

One possible explanation, Chaiyachati said, is that with the telehealth option, Black people who had less pressing health concerns sought care via telemedicine, whereas those who really needed to be seen showed up for their office appointments.

“The greater appointment access that we saw in this study enables people to get their preventive care done via telehealth,” he said. “Otherwise, they might have just skipped it.”

The big question now, he added, is what will happen after the federal public health emergency ends on July 15. If it isn’t renewed or if Congress doesn’t pass a law making the changes in government telehealth policy permanent, the availability of telehealth will be greatly curtailed.

“I’d be curious to do a follow up study 6 months from now to see if there is a reversal of these gains in primary care access,” Chaiyachati said.

Chaiyachati reported receiving grant support from the National Institutes of Health, the Patient-Centered Outcomes Research Institute (PCORI), the RAND Corporation, and Roundtrip, Inc; personal fees from the Villanova School of Business; board membership for Primary Care Progress, Inc; consultancy fees from Verily, Inc; and nonfinancial support from Independence Blue Cross, Inc that are outside of the submitted work.

Ken Terry is a healthcare journalist and author. His latest book is “Physician-Led Healthcare Reform: A New Approach to Medicare for All.”