Test on spine that spots Parkinson’s before symptoms: Protein called alpha-synuclein is released in sticky clumps in the brain and spinal fluid when the disease is first developing

A new test could detect Parkinson’s disease years before any symptoms develop.

It involves taking samples of spinal fluid using a fine needle inserted into the lower back to look for signs of a protein that indicates the disease is setting in.

The protein, called alpha-synuclein, is released in sticky clumps in the brain and spinal fluid when Parkinson’s is first developing.

Now scientists hope the test will lead to earlier diagnosis and help patients get treatment sooner.

Studies show drugs given to control the condition work much better when given early on in the disease rather than when it has worsened, potentially slowing down its progression.

Around 145,000 people in the UK have Parkinson’s disease. It is caused by a loss of nerve cells in an area of the brain involved in controlling movement. 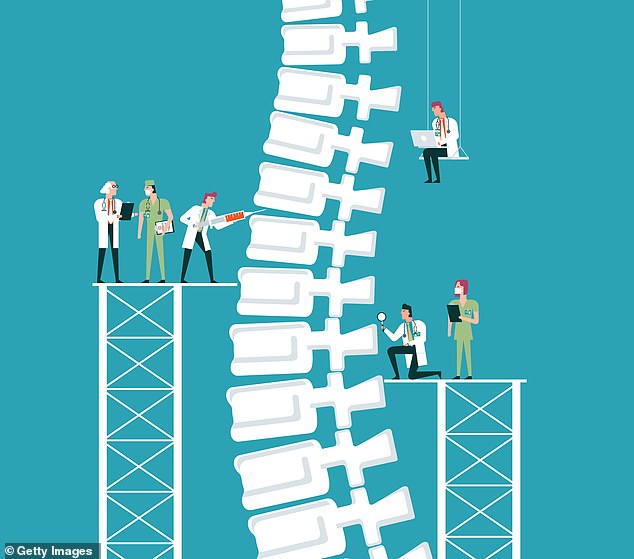 If these become damaged or die, levels of dopamine are reduced and movements become slow and abnormal.

But symptoms of the disease — such as uncontrollable tremors, slow movements or muscle stiffness — often only appear when about 80 per cent of the nerve cells have been lost.

Doctors diagnose the disease by studying a patient’s symptoms and movement, often followed by a DaT scan — a type of brain scan which measures dopamine levels.

The cause remains a mystery but it is believed that some people carry a mixture of genes that predispose them to damage by toxins in the environment, such as man-made pesticides.

Men are 50 per cent more likely to develop the condition than women, possibly because the female hormone oestrogen has a protective effect.

Drugs used to treat Parkinson’s, such as levodopa, reduce symptoms by increasing the amount of dopamine in the brain.

While the average age of diagnosis in the UK is around 65, scientists believe the disease begins to develop, with nerve cells starting to die off, up to 20 years before symptoms show.

Now they are looking at new ways to identify patients during these ‘pre-onset’ years — the hope is that spotting and treating them much earlier will give them a much better quality of life.

Scientists at the Oxford Parkinson’s Disease Centre, part of Oxford University, took spinal fluid samples from 74 people with early-stage Parkinson’s disease and compared them with 55 healthy people without it.

The results, published in the journal Brain, showed that the test correctly identified 89 per cent of those with Parkinson’s from the abnormal clumping of the alpha-synuclein protein in the fluid samples. Researchers described the test as acting ‘like a window to the brain’.

The idea is it could one day be used early in the diagnostic process, when patients often see their GP with symptoms not obviously linked to Parkinson’s. For example, many patients suffer from frozen shoulder (where the joint becomes stiff and sore) because of hidden Parkinson’s up to two years before any other signs, such as tremor, emerge.

Ray Chaudhuri, a professor of movement disorders at King’s College London, said the new test is ‘a step in the right direction of getting an earlier diagnosis’.

However, he added: ‘Taking samples of spinal fluid [using a long needle inserted into the spine] might not be a palatable option for some patients.’

Eating a Mediterranean-style diet rich in vegetables, fruits, fish and olive oil can ease constipation, a common complication of Parkinson’s disease as it affects the muscles controlling bowel movement.

When researchers at the University of Florida in the U.S. put eight Parkinson’s patients with constipation on a Mediterranean diet for five weeks, uncomfortable blockages were reduced by about a third.

Print your own medicine to treat nail infections

A drug-infused ‘ink’ might offer a new way to combat fungal nail infections.

The usual treatment is a pill or cream containing the drug terbinafine.

Now researchers at University College London have put the antifungal drug into an ink, which is then loaded in a nail printer — a widely available device used in salons to print a pattern on to the nail.

While other topical treatments such as gels and patches are being developed, they don’t allow the patient to control the drug dose as precisely as with a printer, reports the journal Pharmaceutics. 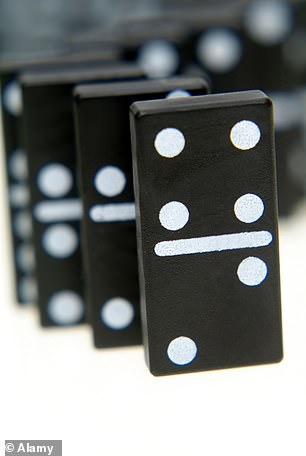 Asthma sufferers may have a higher risk of rheumatoid arthritis (RA), reports the journal Seminars in Arthritis and Rheumatism

Health conditions that are linked to other diseases. This week: respiratory disease and rheumatoid arthritis.

Asthma sufferers may have a higher risk of rheumatoid arthritis (RA), reports the journal Seminars in Arthritis and Rheumatism.

Researchers from the Mayo Clinic in the U.S. found that people who’d previously had acute sinusitis had a 91 per cent higher risk of RA; the risk was 74 per cent greater if they’d had acute pharyngitis (throat inflammation), 56 per cent greater with chronic obstructive pulmonary disease (a range of respiratory conditions including emphysema), and 29 per cent with asthma.

One suggestion is that antibodies that attack healthy tissue in arthritis may first develop in the mucus that lines the respiratory tract.

Images that make you feel nostalgic may ease pain, according to the Chinese Academy of Sciences. Researchers monitored the brain activity of 34 people as they looked at childhood scenes or pictures of modern life, while heat was applied to their arms. Those viewing the childhood scenes had lower activity in regions of the brain related to the perception of pain.

In a study, scientists used iloprost and misoprostol to help ‘reactivate’ progenitor cells in tissue samples that had been taken from lungs damaged by smoking.

Progenitor cells are a type of stem cell — or master cells — that can develop into new tissue.

Researchers now plan to investigate whether the regenerated cells can trigger the lining of damaged lungs into growing back.

Zapping nerves in the penis could prevent premature ejaculation, reports the Asian Journal of Urology. Scientists in Lebanon tested the treatment on one man, three times a week for two months. This led to a five-minute improvement in ejaculation time. The theory is that the electric charge interfered with signals that cause ejaculation. 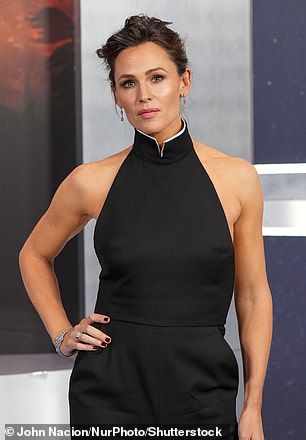 The star’s pronounced biceps were on show at the premiere of her film, The Adam Project, in February

Secrets of an A-list body

The star’s pronounced biceps were on show at the premiere of her film, The Adam Project, in February. Jennifer, 50, works with a personal trainer at least five days a week and does circuit-style sessions involving cardio and plenty of squats.

What to try: The Zottman Curl is great for building toned biceps. Hold a light dumbbell or bottle of water in each hand and let your arms hang at your sides, palms facing forward.

Keeping your upper arms tight to your body, bend your elbows and curl the dumbbells up towards your shoulders. Pause, then rotate the dumbbells so palms face outward, before slowly lowering down in that position.

At the bottom, rotate to starting position and repeat 12 times.