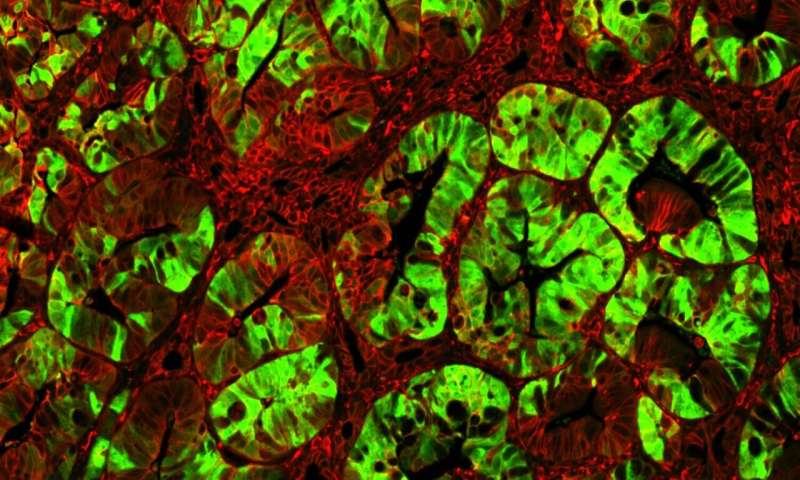 Since colonoscopies were introduced in Germany for early cancer detection, the number of diagnoses of advanced cancer every year has decreased, as precancerous lesions can now be detected and immediately removed as part of the examination. As a result, the death rate from colon cancer has also gone down—by 26 percent in women and 21 percent in men. Nevertheless, it remains the fourth deadliest cancer in the Western world—just behind lung, prostate and breast cancer. This is because the slow-growing tumors only become noticeable in the advanced stages of the disease and are therefore often diagnosed too late. Survival rate for advanced colorectal cancer is just five percent.

“Treatment options are very limited—not least because the cancer can return even after successful chemotherapy,” explains Johanna Grinat, the study’s lead author and a doctoral student in the Signal Transduction in Development and Cancer Lab. “The recurrent cancer is often more aggressive than the original tumor, which is thought to be caused by cancer stem cells. So we took a closer look at these cells.”

The researchers led by Professor Walter Birchmeier identified Mll1, a protein that regulates stem cell genes in mice and in human colon cancer cells. In mice, the team was able to genetically trigger the formation of intestinal tumors. However, if the mice lacked the gene for Mll1, no tumors were able to be induced. And this seems to be the case in humans as well: Human colon cancer cell cultures that the scientists enriched with cancer stem cells lost some of their stem cell properties and behaved less aggressively when Mll1 was blocked. Together with Professor Eduard Batlle and bioinformaticians at the IRB in Barcelona, the MDC group used clinical data to show that colon cancer patients whose tumors have a large amount of this protein have a worse prognosis than patients with tumors that contain little Mll1.

Mll1 is an enzyme that sits on the DNA and controls the expression of certain genes ‘epigenetically,’ as the researchers say. “It primarily does this in cancer stem cells, where the Wnt signaling pathway is strongly activated,” Grinat explains. “This means that, by deactivating it, we can specifically treat cancer stem cells.”

The Wnt signaling pathway regulates the self-renewal and division of stem cells. If mutations occur that trigger a more active Wnt signaling cascade, the affected stem cells become more resistant than healthy stem cells. They then multiply uncontrollably and form tumors. Although chemotherapy slows down the cell division, it can also increase the selection pressure on cancer stem cells: “They become resistant to the treatment and form new tumors that, due to the mutation, grow more rapidly and are even more aggressive,” says Dr. Julian Heuberger. This is why it is so important, he explains, to understand the regulatory mechanisms of cancer stem cells in particular. The postdoctoral researcher is also lead author and head of the study and now works in the Division of Hepatology and Gastroenterology in the Medical Department of Charité – Universitätsmedizin Berlin. “With Mll1,” he adds, “we have found a molecular switch that primarily controls the self-renewal and division of cancer stem cells in colon cancer”

Genetically ‘knocking out’ a gene, as the scientists did with mice, is not possible in humans. In mice, the formation of cancer stem cells can be followed over time and there are always enough stem cells available for experiments. However, MII1 could be blocked with a chemical drug. Small molecules have already been developed for this research, for example, the inhibitors MI-2 and MM-401, which bind to essential Mll1 complexes and thereby inactivate its function. “Understanding the way these molecules work will enable us to develop and test these and even more clinically effective Mll1 inhibitors,” says Birchmeier, who is the study’s last author.

Healthy stem cells in the intestine are apparently not blocked in the process. “We were able to use another system in mice, salivary gland cancer cells, to show that Mll1 only affects cancer cells and not healthy stem cells,” says Birchmeier. This also provides hope for the treatment of other types of cancer, as animal models have shown that head and neck tumors have the same Achilles’ heel. “On the basis of our mouse studies, clinical trials are currently being conducted at the University Hospital of Düsseldorf to evaluate the use of Mll1 inhibitors in the treatment of head and neck tumors.”