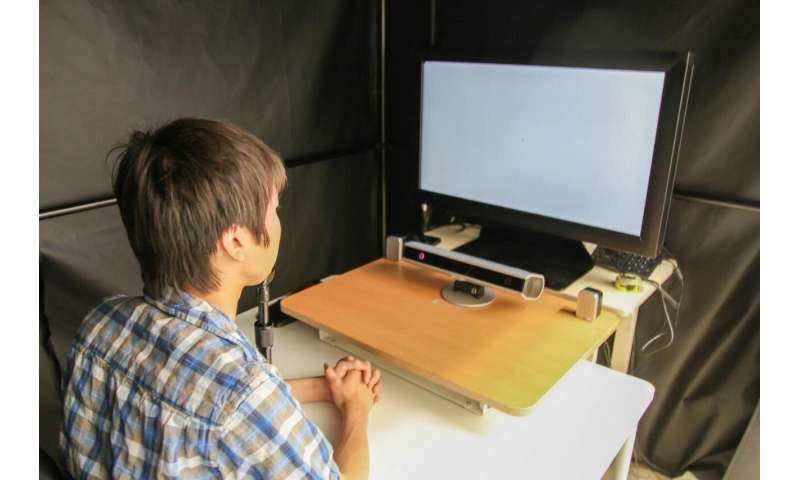 A research team of the Department of Computer Science and Engineering and the Electronics-Inspired Interdisciplinary Research Institute at Toyohashi University of Technology has discovered that the difference in the ability to hear and distinguish English words including L and R, which are considered difficult for Japanese people, appears in pupillary (the so-called “black part of the eye”) responses. While the pupil has the role of adjusting the amount of light that enters the eye, it is known that the size changes reflect the cognitive state of humans. In this study, the research team conducted experiments to simultaneously measure the size of the pupil while playing English words in combinations such as ‘light’ and ‘right,’ and clarified that it is possible to objectively estimate the ability to distinguish English words from the eyes.

The improvement of English proficiency is drawing attention in various fields as our society becomes more globalized. However, we Japanese are said to be very weak in the pronunciation of and the hearing and distinguishing of L and R which are sounds that do not originally exist in Japanese, such as in ‘glass’ and ‘grass.’ Similarly to how words that cannot be recognized cannot be pronounced, the ability of each person to hear and distinguish English is a very important indicator in effective English learning.

As in the proverb ‘The eyes say more than the mouth,’ it is known that the human pupil reflects a variety of our cognitive states. So, the research team tried to estimate the ability to hear and distinguish L and R by focusing on pupillary dilation response in which the pupil dilates with respect to the difference in sound. Specifically, the research team occasionally mixed in English words containing R (e.g., ‘right’) with the continuously playing English words containing L (e.g., ‘light’), and investigated how the pupils of test participants responded to those sounds. Participants were classified into two groups according to their scores in the English auditory distinguishing test performed in advance, to compare the pupillary response of both groups. 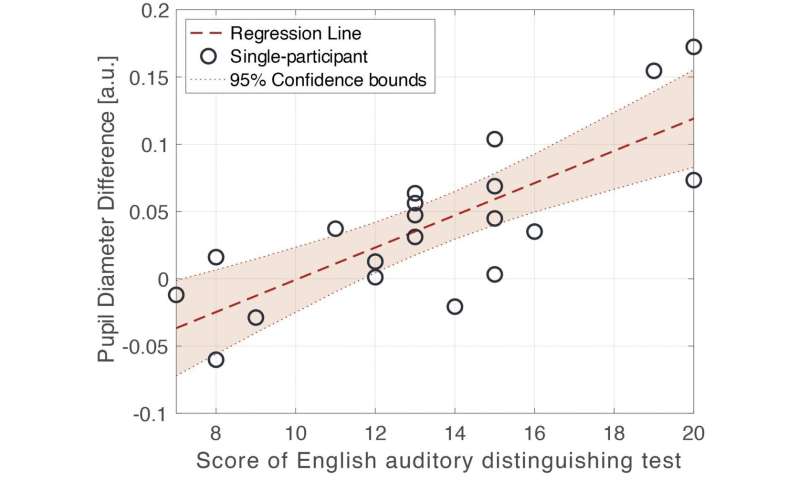 “Up to now, the evaluation of an individual’s English listening ability has been carried out by actually performing a test in which they are made to listen to English words, and scoring whether the answers are correct or incorrect. However, we focused on the pupil, which is a biological signal, with the goal of extracting objective abilities that did not depend on the participants’ responses. Although the English words including L and R which were not being taken notice of were easy for all participants to potentially hear and distinguish, pupillary responses differed according to their abilities. So, I believe that this indicates that there is a possibility that our pupillary responses are reflecting differences in unconscious language processing,” the lead author Yuya Kinzuka, a Ph.D. candidate, explained.

Professor Shigeki Nakauchi, who is the leader of the research team, explained, “It was difficult for even the person themselves to recognize their listening ability, which sometimes led to a decrease in training motivation. However, this research has made it possible for not only the person themselves, but also a third party to visualize the listening ability of the learner objectively from the outside. I expect that in the future, objective measurement of the ability to hear and distinguish things will progress in various fields such as language and music.” In addition, research member Professor Tetsuto Minami explains, “This discovery shows that not only simple sounds such as pure tones, but also higher-order factors such as differences in utterances are reflected in pupillary response. I expect that it will be useful as an English learning method if it is possible to improve the ability to hear and distinguish things by controlling pupil dilation from the outside.”

The research team has indicated that a new method to estimate from pupillary response the ability to hear and distinguish English based on these research results could lead to the construction of a system wherein the distinction between L and R which Japanese are not good at, can be efficiently studied. Furthermore, it is known that learning difficulties caused by the distinguishing of sounds that do not exist in the native language also occur when an English speaker learns Chinese.