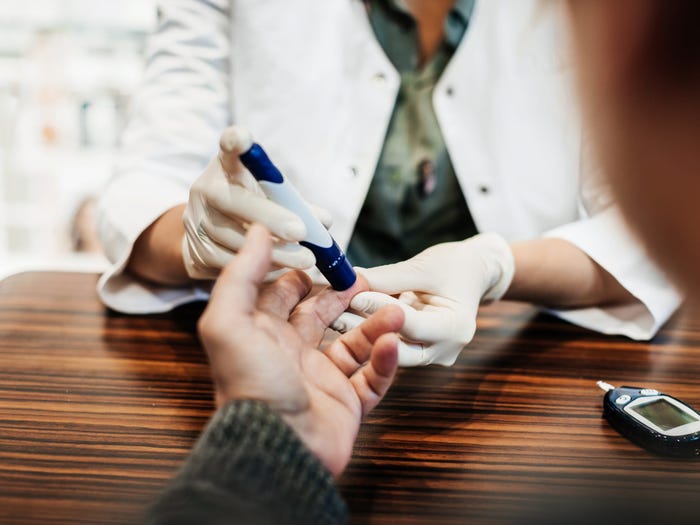 There's even more evidence that a keto diet could help patients with diabetes control their blood sugar.

In a review  published November 30 in Nutrition and Diabetes, researchers from the First Hospital of Jilin University in China looked at 13 different studies of the keto diet as a treatment for type 2 diabetes. They found that the low-carb, high fat diet was effective at helping diabetics control their blood sugar levels and improve their sensitivity to insulin.

The keto diet also helped obese and overweight participants lose weight — an average of 19 pounds across all the studies, which ranged from one week to a year in length.

Previous research, including case studies, has shown keto is an effective therapy for diabetes

This study is a promising addition to existing evidence that keto can benefit people who have type 2 diabetes or are at risk of developing it.

Researchers theorize that it works because eating carbohydrates raises blood sugar levels. Typically, the body produces a hormone called insulin to regulate blood sugar, but people with type 2 diabetes have become resistant to the effects of insulin.

Reducing carbs targets the source of the problem by preventing blood sugar from rising in the first place, said Dr. Mark Cucuzzella, a professor at the West Virginia University School of Medicine who has published several studies on keto and diabetes.

"The most impactful thing on your blood glucose is the amount of carbs in your diet. The low-carb diet is effective because it lowers the insulin load," Cucuzzella previously told Insider. "Insulin is the master switch."

More research is needed, particularly on long-term outcomes and potential side effects

This newest analysis didn't look at side effects of the keto diet, since few of the studies included that information. It was also limited to relatively short-term data.

A lack of longer-term data on the keto diet has led some doctors and dietitians to express concerns about the high fat content of keto diets, particularly when it comes from saturated fats like red meat and dairy. That's because those fat sources may increase the level of unhealthy cholesterol in the body, upping the risk of heart disease.

Another obstacle for keto research is that the definition of the diet varies widely. In this analysis, the keto diet ranged from fewer than 15 grams of carbohydrates a day to as many as 30 to 50 grams of carbs, or as much as 10% to 14% of total daily calories.

The types of fat sources can also vary widely, particularly in popular representations of keto, which depict the diet as relying heavily on red meat like burgers and bacon, butter, and even fast food.

This can make it tricky to determine which, if any, of these versions are best for health and which might have unintended negative effects. More research could help people find the diet that works for them.

A 'well-formulated' keto diet is one that focuses on whole-food sources of fats, retains nutrient-rich vegetables, and avoids processed food even if it's low-carb, according to Dr. Sarah Hallberg, medical director for Virta Health, a company that specialized in keto diets for type 2 diabetes.

"The idea that this is all meat sticks and heavens knows what else is not true," Hallberg previously told Insider.