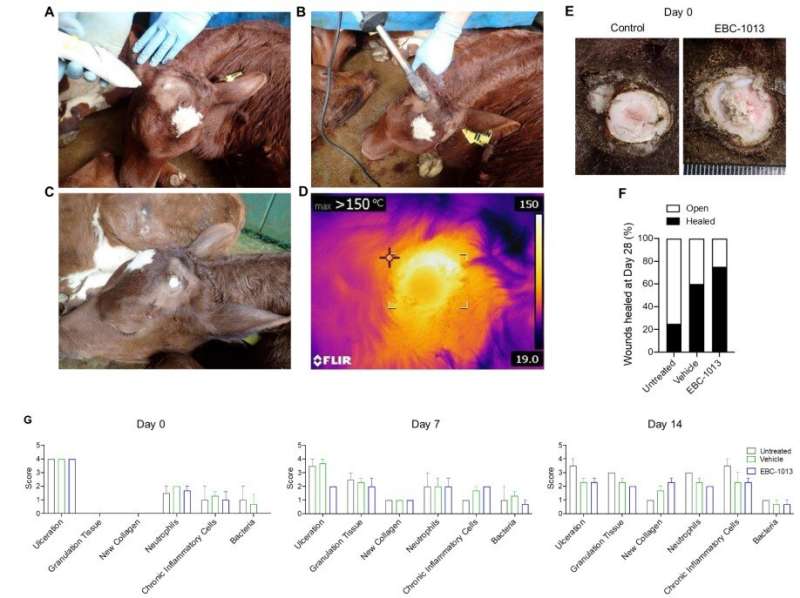 A team of researchers affiliated with multiple institutions in the U.K. and Australia has developed a nontraditional ointment to treat skin wound infections based on a molecule found in the sap of a Queensland blushwood tree. The study is published in the journal Science Translational Medicine.

Prior research (and anecdotal evidence) had shown that the Queensland blushwood tree has medicinal properties—its sap is currently being studied by another team to discover if it might help treat cancer patients. In this new effort, the researchers studied the sap and used it to make an ointment as a therapy for hard-to-treat open skin wounds.

Open skin wounds have become a major problem in recent years due to the large number of people living with diabetes. People with the disease have reduced blood flow to their feet, which makes them susceptible to chronic, nonhealing skin wounds. These wounds are particularly susceptible to bacterial infections that are hard to treat because the bacteria create films that block antibiotics. Also, medical scientists would prefer not to treat such infections with traditional antibiotics because it speeds up the rate at which they become immune to such therapies.

In this new effort, the researchers examined sap samples from the blushwood tree and identified a molecule that appeared to be a promising candidate to treat open wound bacterial infections. Called EBC-103, the molecule interferes with the structure of the biofilms, allowing the immune system to mount an attack. They also found that the molecule incited inflammation in the area where it was applied, which also helped with healing.