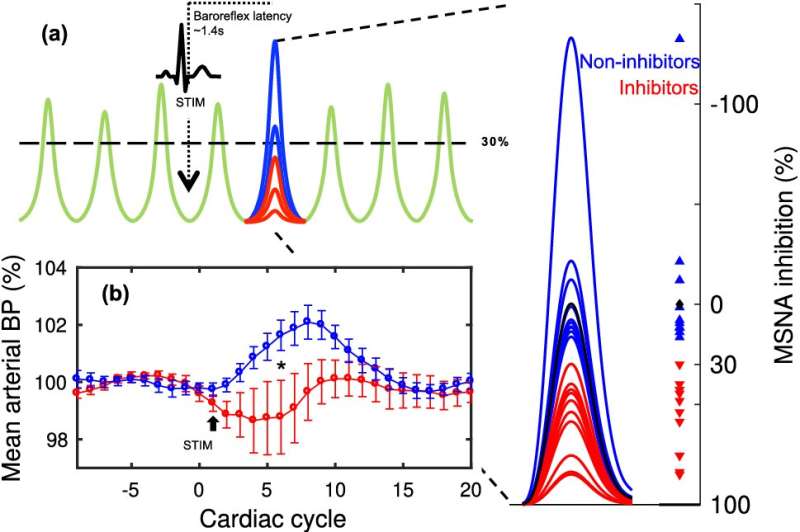 In roughly half of all people with hypertension—persistently high blood pressure (BP)—there is no known cause. One plausible theory is, however, that hypertension might be the result of a long period of many recurrent BP peaks. Hundreds or thousands of micro-stress events may occur daily—the telephone ringing, a car horn sounding in the street—with BP spiking every time as a result.

For nearly 20 years now, a University of Gothenburg research group has been investigating how this kind of micro-stress affects nerve signals to our muscles and the throughput (perfusion) of blood in their vessels (muscle vasculature). In half of the over 150 men included in the group’s studies to date, the pattern of their reaction system leads to BP peaks, while for the other half the reactions taking place in their bodies do not bring about any change in BP.

The latest results are published in Scientific Reports. For the study, 20 men aged 19–45 were examined. The experiment involved triggering a response in the nervous system with unexpected electric shocks that emulate the sudden and/or stressful stimuli to which we are exposed daily. The researchers combined two measurement methods. In one, a traditional research technique called microneurography, very thin needle electrodes are used to probe the signaling in nerve fibers (specifically, muscle sympathetic nerve activity, MSNA) directed to the vascular bed (blood vessels) of the muscles. The other was a modern brain-imaging technique known as magnetoencephalography (MEG).

For the first time, the researchers can now link the increased susceptibility to micro-stress to a reflex-like signal in the brain. The brain area (the “rolandic area”) that activates the signal controls several conscious brain functions. This finding opens the question of whether the BP peaks may be learned and could therefore also, with training, be eliminated.

“We see a surprisingly strong connection between the peripheral autonomic vascular reaction, which takes place subconsciously, and a reaction pattern—one that was already previously well known—in a part of the brain where emotional impressions and motor skills undergo conscious interpretation. This raises questions about how independently the ‘autonomic nervous system,’ as it’s called, really works,” says Mikael Elam, Professor of Clinical Neurophysiology at Sahlgrenska Academy, University of Gothenburg.

Long road ahead to clinical use

The idea that the discovery might come to be used to prevent hypertension is not unrealistic, but much research remains to be done.

“If we can develop ways of boosting the signal-to-noise ratio, in the future it may be possible to extract the relevant brain signals from a regular electroencephalogram [EEG], which is available in every Swedish hospital today. That would enable us, at an early stage, to identify people who react with BP spikes before they develop hypertension. Many other opportunities for preventive measures and research would then follow,” says Justin Schneiderman, Senior Lecturer in experimental multimodal neuroimaging at Sahlgrenska Academy, University of Gothenburg.

Interestingly, our environment seems to matter more than our genetic code when it comes to which reaction pattern we develop, and thus whether we experience many daily BP spikes or not. An earlier study by the research group on identical twins showed that basic activity in the twins’ blood-vessel-regulating autonomic nervous systems was very similar, while their stress-triggered reactions diverged.

“One may speculate that, today, many people have learned to suppress the primitive fight-or-flight response, since it’s not that relevant in modern society. It’s an impulse that prepares us for action, by reducing the vasoconstrictor nerve activity and thereby increase blood flow in the muscles. In terms of long-term health consequences, it might be beneficial to preserve the old flight-or-fight impulse in response to sudden stressors,” Elam ponders.

The research group hopes to be able to facilitate studies at the population level, monitoring large groups of people over a long period. This would enable investigation of, first, whether individuals with reaction patterns that cause many peaks in blood pressure during the day are indeed at increased risk of developing hypertension later in life and, second, whether influencing this reaction pattern is feasible.

The research that maps the biological processes and signals controlling autonomic regulation of our blood vessels is taking place in a wide-ranging collaboration involving the University of Gothenburg, Sahlgrenska University Hospital, and Chalmers University of Technology.