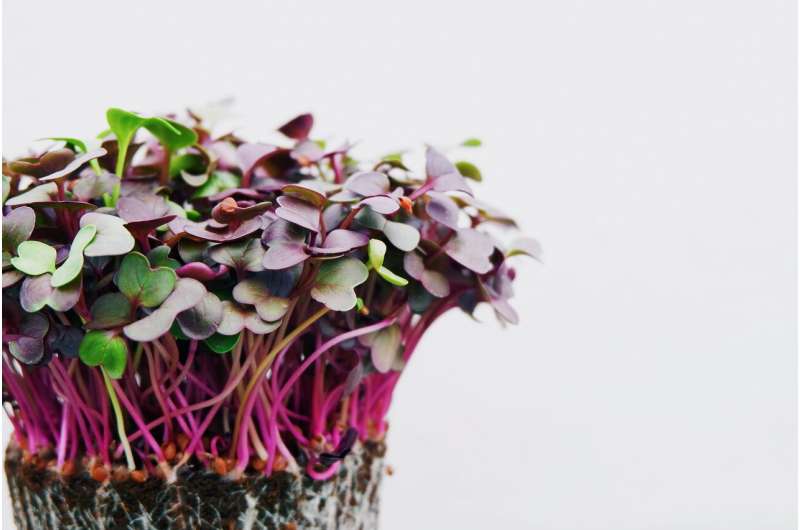 As one of the trendiest foods in the produce aisle, microgreens are known for adding a splash of color to a dish, a spicy kick to a salad—and a chunk of change to a grocery bill.

Known for a variety of flavors, textures and aromas, microgreens originated as a product of the California restaurant scene in the 1980s. Smaller than baby greens, they are harvested just one to two weeks after germination—typically later than sprouts, which don’t have leaves. They usually are 1 to 3 inches tall and often are sold with the stems attached.

Most microgreens are rich in concentrated vitamins and antioxidants. A 2012 study in the Journal of Agricultural and Food Chemistry looked at 25 commercially available microgreens and found they contained nutrient levels up to 40 times higher than more mature leaves. Other research also has shown microgreens contain a wider variety of antioxidants and micronutrients called polyphenols.

Nutrient content aside, microgreens are not a replacement for leafy and other greens in one’s diet, said Christopher Gardner, director of nutrition studies at the Stanford Prevention Research Center in California. Instead, they serve a better purpose as a way to add variety to a regular salad or other healthy meal.

According to the federal dietary guidelines, an adult consuming 2,000 calories a day should eat 2 1/2 cups of vegetables each day, and the key is variety. Yet almost 90% of the U.S. population fall short of that number, the guidelines say.

“I’ve been working more and more with chefs these days and one of the points that I’ve been trying to help people walk away with is that food really should bring them joy and pleasure,” said Gardner, vice-chair of the American Heart Association’s nutrition committee. Microgreens are “tasty with this sharp spice, that taste in the back of your mouth that you’re not accustomed to.”

Microgreens—sometimes called “vegetable confetti”—are grown from the seeds of a wide array of plant families, with varieties including cauliflower, broccoli, cabbage, arugula, radicchio, carrot, celery, quinoa, spinach, melon, cucumber and squash. They can be eaten on their own, blended into a smoothie, added to a wrap or salad, or as a garnish on soups and other dishes.

As the COVID-19 pandemic has changed people’s attitudes about their food shopping habits, do-it-yourself microgreens have offered a sustainable alternative. Growing them at home also may be an antidote to high prices at the grocery store or farmers market. They can be grown year-round, indoors or outdoors, without requiring much time, equipment or expertise.

“Is there something about being in a New York apartment and being able to grow a little backyard tray of microgreens and add it to your food?” Gardner said. “It might not be the meal, it might be just something that you add to what you’re eating for the taste.