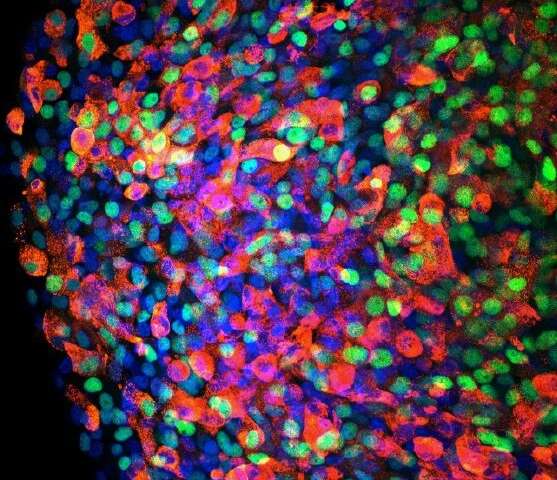 Type 1 diabetes is an autoimmune disease that occurs when T-cells in the immune system attack the body’s own insulin-producing cells, called beta cells, in the pancreas. Usually diagnosed in children and young adults, type 1 diabetes accounts for around five percent of all diabetes cases.

The underlying biology of type 1 diabetes is tricky to study for a number of reasons. For one thing, by the time a person begins to show symptoms, their T-cells have already been destroying beta cells for a long period—months or even years. Also, the initial trigger for the disease is often unclear; a number of beta cell proteins can set off the immune response.

In a study published Sept. 22 in Cell Reports Medicine, researchers in the lab of Whitehead Institute Founding Member Rudolf Jaenisch demonstrate a new experimental system for more precisely studying the mechanisms of type 1 diabetes, focusing on how a person’s beta cells respond to an attack from their own immune system. In doing so, they reveal features of the disease that could be targets for future therapeutics.

“Here our question was, let’s say the T cells get activated; what happens next from the perspective of beta cells? Could we find some potential intervention opportunities?” said Haiting Ma, a postdoctoral associate in Jaenisch’s lab and the first author of the study.

Ma, working with Jaenisch, also a professor of biology at MIT, and Jacob Jeppesen, Novo Nordisk’s Head of Diabetes and Metabolism Biology, took a synthetic biology approach to achieve this goal.

The researchers engineered a system by inducing human pluripotent stem cells to differentiate into functional pancreatic beta cells, and added a model antigen called CD19 to these cells using CRISPR techniques. They established that these cells functioned as insulin-producing beta cells by implanting them in diabetic mice; upon receiving the cells, the mice experienced an improvement in glucose levels.

They then replicated the autoimmune components of the disease using engineered immune cells called CAR-T cells. CAR-T cells are T-cells tailor-made to attack a certain type of cell; for example, they can be targeted to tumor cells to treat certain types of cancer. For the diabetes model, the researchers engineered the cells to contain receptors for the model antigen CD19.

Using their new experimental system, the researchers were able to identify some interesting factors involved in the beta cells’ response to diabetic conditions. For one thing, they found that the beta cells cranked up production of protective mechanisms such as the protein PDL1. PDL1 is a protein found on non-harmful cells in the body that, in normal circumstances, prevents the immune system from attacking them.

Changes in PDL1 levels had been associated with type 1 diabetes in previous studies. Now, Ma wondered if it was possible to rescue the beta cells from the immune onslaught by inducing the expression of even more of the helpful protein. “We found that we can help beta cells by giving them a higher expression of PDL1,” he said. “When we do this, they can do better in the model.” If validated in human cells, increasing expression of PDL1 could be evaluated as a potential therapeutic method, Ma said.

Another finding concerned the way the cells died after T-cell attack. Ma found that the genes that were being upregulated as the beta cells were under attack were associated not with the usual form of cell death, apoptosis, but with a more inflammatory and violent kind of cell death called pyroptosis.

“The interesting thing about pyroptosis is that it causes the cells to release their contents,” Ma said. “This is in contrast to apoptosis, which is considered to be the main mechanism for autoimmune response. We think that pyroptosis could play a role in propelling this autoimmune reaction, because the contents from beta cells include multiple potential antigens. If these are released, they can be picked out by antigen presenting cells and start to crank up this autoimmunity.”

The process of pyroptosis in the context of beta cell autoimmunity could be linked to ER stress in beta cells, a highly secretory cell type. Indeed, an ER stress inducing chemical increased the marker of pyroptosis.

If researchers could find a way to inhibit the process of pyroptosis safely in humans, it could potentially lessen the severity of the autoimmune reaction that is the hallmark of type 1 diabetes. Pyroptosis is mediated by a protein called caspase-4, which can be inhibited in the lab. “If that can be validated in patient beta cells, that could indicate that modulating caspases could also be [a therapeutic mechanism],” Ma said.

Going forward, Ma and Jaenisch plan to investigate the immune mechanisms underlying autoimmunity in humans by using induced pluripotent stem cells from patients with type 1 diabetes. “These cells could be differentiated into immune cells such as T, B, macrophage, and dendritic cells, and we can investigate how they interact with beta cells,” Ma said.