SciLine, an independent media organization created in partnership with the American Association for the Advancement of Science (AAAS), asked its experts the following question: ‘What science-backed considerations are most important for voters to understand as they compare candidates’ approaches to addressing […] climate change issues?’ Below, we report on the experts’ answers. 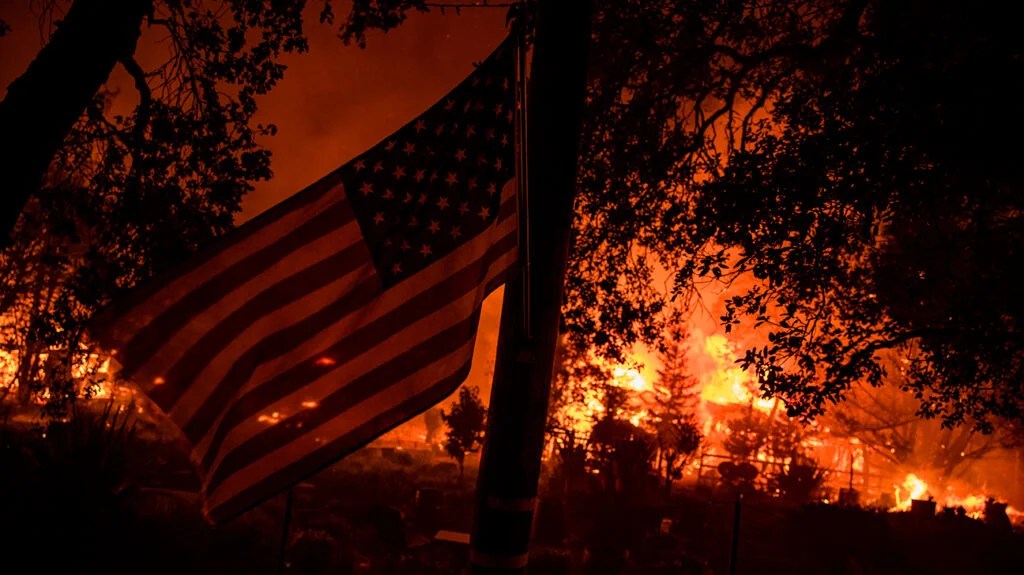 Climate change — or, what some have argued should be called a climate crisis or climate emergency — affects human health in several significant ways.

It also affects some people more than others. Studies have highlighted low-income regions and specific demographic groups, such as children or the elderly, as being hit the hardest. The current climate crisis, therefore, exacerbates health inequalities.

Climate change is a human-made problem, and it requires individual engagement to halt its harmful effects.

Every person can take steps in their day-to-day lives to prevent the potentially disastrous consequences of global heating. But equally vital — if not even more so — is political action.

As with COVID-19, a global response coordinated at the policy level is crucial for making progress.

And much like the current pandemic, climate change also evidences the fact that politics — and the decisions that the leaders make — directly affect peoples’ health.

If you would like to check your registration status or register to vote, we have added some useful links at the bottom of this article.

In the wake of the upcoming presidential election, SciLine asked its experts about the scientific considerations regarding climate change that voters should consider when electing their president.

In this special feature, we report on these experts’ insights. But before we do so, we take a look at some of the ways in which climate change affects health.

How does climate change impact health?

According to the latest issue of this report (2019), climate change and its knock-on effects damage health in the following ways:

As the authors of the Lancet report note, “Floods are particularly problematic for health, resulting in direct injuries and death, the spread of vector-borne and water-borne diseases, and mental health sequelae.”

Although the researchers recognize the difficulty of establishing causal links between climate change and mental health, they acknowledge that the latter “might be negatively affected in various ways by heatwaves, loss of property, and loss of livelihoods due to floods, or climate-induced migration.”

Finally, climate change has profound implications for health equity. As the authors of the Lancet Countdown report write:

“The distribution of exposure and effect is not equal, with several indicators reporting greater changes in low-income settings than in high-income settings — for example, in parts of Africa, South-East Asia, and the Western Pacific.”

Can we avoid the most dangerous effects?

In this context, SciLine asked its experts an important question: “What science-backed considerations are most important for voters to understand as they compare candidates’ approaches to [climate change]?”

“The science on climate change is clear — we need to halve global greenhouse gas emissions by 2030 and fully decarbonize by 2050 if we have any hope of avoiding the most dangerous effects.”

Chandana Mitra, Ph.D., associate professor in the Department of Geosciences at Auburn University in Alabama, cut straight to the chase, mentioning some greener alternative choices that we all need to make and that our political representatives must lead on. “It is time to act,” she says.

These choices include: “Less deforestation, creating more green spaces; more efficient fuel, trapping renewable energy, such as wind, solar and waves; electric vehicles; climate change education and awareness, all of these will help us slow and eventually stall the climate change wheel.”

‘We do not have any semblance of a plan’

Linda Shi, Ph.D., assistant professor in the Department of City and Regional Planning at Cornell University in Ithaca, NY, is critical of the government’s lack of accountability.

“Climate change is redrawing the landscape of areas suitable for human habitation,” she says. She also cites some of the countless reports highlighting the harmful effects of climate change. Yet the government’s response, she says, is lacking.

“As with COVID-19, what we do not have is any semblance of a plan that is coherent, cohesive, collective, and commensurate to the scale of climate risks and impacts.”

Furthermore, Shi warns that leaving climate issues in the hands of corporate interests will only exacerbate existing inequalities.

“[F]financial industries controlling mortgages, municipal bonds, insurance, and liability are attuned to corporate financial exposure and beginning to incorporate climate risks into their policies. This “market realignment” has little regard for fairness, community sense of place, local government function, or unequal impacts within and among metropolitan areas.”

“Government denial of climate change abdicates the powerful federal government voice and position in ongoing debates underway in every sector and level of society about how to grapple with climate impacts. Its absence makes it that much more likely that private and decentralized adaptation responses will lead to widening societal inequality and racial injustice.”

Other researchers make more detailed points about implementing specific policies to steer away from fossil fuels and move towards renewable energy.

As Hsu says, “[T]he number one thing candidates’ plans should be doing is having a clear plan for how they’re going to shift the U.S. energy system away from fossil fuels.”

“We simply cannot reach the goal of decarbonization if we’re still burning fossil fuels, including natural gas,” he continues.

“We need candidates that will put in the hard work to specify broad policies like carbon taxes, removal of fossil fuel subsidies, fiscal incentives for renewable electricity consumption, that will rapidly shift the nation’s energy system away from polluting fossil fuels.”

Other experts agree with Hsu. Daniel Kammen, Ph.D., who is a professor in the Energy and Resources Group at the University of California, Berkeley, referred to the recent power outages that California experienced as a result of the heatwave.

While there was much debate around what caused the outages specifically and the role that renewable energy played, Prof. Kammen says, “The growth of renewable energy has not been a cause of the recent power outages in California. Far from it, in fact, solar and wind have literally kept the lights on. Fossil fuel (fossil gas) plants went off-line.”

“The role of renewable energy could have been even larger in providing reliable electricity if investments in energy storage and in smart two-way communication had been larger,” Prof. Kammen adds.

Carbon capture, storage, and use

Some experts have hailed carbon capture, usage, and storage (CCUS) as a human-made, technological way of offsetting some of the damage that carbon emissions have caused.

However, researchers quizzed by SciLine are emphasizing its costs and limited benefits.

For instance, M. M. Faruque Hasan, Ph.D., associate professor in the Department of Chemical Engineering at Texas A&M University, says, “It is important to realize that there is no single technology or strategy that is sufficient to effectively reduce the CO2 emissions from a variety of sources and sectors.”

“We can think of CCUS as a bridging technology that enables us to quickly reduce CO2 emissions as we transition from burning fossil fuels to using renewables, secure our energy demands, and diversify our energy portfolio,” he continues, adding that “CCUS can be expensive and may require significant investment.”

Other researchers agree, highlighting that this technology is by no means a silver bullet, but rather should be regarded as complementary to reducing carbon emissions.

“Carbon capture and storage (CCS) is the only currently practical means of decarbonizing some industries and is a complement to renewables in an energy ecosystem.”

“CCS remains a pragmatic part of the portfolio,” adds Hovorka, who also emphasizes that creating CCS in itself spends energy.

“Mitigation of carbon build-up in the atmosphere is not free,” she says. “Extra energy is consumed during the process of CCS to reduce emissions, and investment in infrastructure is needed to build an overall carbon negative economy.”

“In order to avoid consequences of carbon emissions, policies are needed to incentivize consumers and suppliers of energy and goods to pay for low carbon products.”

Automobiles are a well-known culprit in global heating, so here too, there are science-backed considerations that voters may wish to take into account when comparing their candidates’ approaches.

Susan A. Shaheen, Ph.D., who is a professor in the Civil and Environmental Engineering at the University of California, Berkeley, urges people to reimagine how their society will look like post-COVID-19 in terms of transportation.

“Prior to the pandemic, the transportation section was on the cusp of change driven by advancements in automation, electrification, and shared mobility. As the world recovers from the COVID-19, it is important to consider the opportunities to reimagine our transportation network.”

She also points out that vehicle automation could either help or hinder the climate, as they may increase vehicle congestion rather than ease it. “Policies will likely be needed to encourage the sustainable adoption of these emerging technologies,” adds Prof. Shaheen.

Yinhai Wang, Ph.D., a professor of Civil and Environmental Engineering at the University of Washington, D.C., breaks down the numbers on car usage in the United States.

“Transportation is the second largest category of American household spending,” he says, “accounting for 17.4% or $811 per month in 2017.”

“Fuel and motor oil purchases accounted for 23.6% of transportation expenditures or $290 billion in the U.S., and the traffic congestion resulting from the cars using that fuel cost the US economy nearly $87 billion in 2018 due to lost productivity.”

“Controlling car-trip demand on roads and increasing the capacity of our roads are two important solutions to traffic congestion and the extra air pollution caused by traffic jams,” proposes the researcher.

“Carpooling and mass transit are two great alternatives to single-occupancy vehicle trips and help reduce demand for road space. Unfortunately, 91% of people commuting to work use personal vehicles.” Additionally, says Prof. Wang, “45% of Americans have no access to public transportation.”

SciLine also enquired about the science behind plans to salvage agriculture from the inevitable consequences of climate change.

Lewis Ziska, Ph.D., an associate professor in the Department of Environmental Health Science at Columbia University, NY, says the major challenges posed by climate change could become opportunities for progress under the right guidance at the policy level.

“If, for example, warmer weather results in a longer frost-free season, how can crop selection and management be optimized to exploit that change? If extreme events (precipitation) are more likely, can alternative practices, such as cover crops, be used to limit soil erosion or improve soil health?

“If pest demography is changing, what innovations are available to identify and respond to new pests?” These are some of the questions that political leaders must ask themselves and provide answers to.

“The U.S. has a long, profound history of agricultural progress. Given that the challenges are intense, the need for a coordinated response in the public and private arena has never been greater. As the U.S. is the world’s greatest food exporter, such a response is vital to maintain and continue global food security as climate uncertainty continues.”

To check your voter registration status, click here to visit the website of VoteAmerica, a nonprofit, nonpartisan organization dedicated to increasing voter turnout. They can also help you register to vote, vote by mail, request an absentee ballot, or find your polling place.