The CRISPR/Cas 9 system is being widely employed for editing genes in mammalian systems. However, recently, the Cas9 enzyme has demonstrated potential as a biosensor, and various Cas effectors are now being applied to molecular diagnostics. 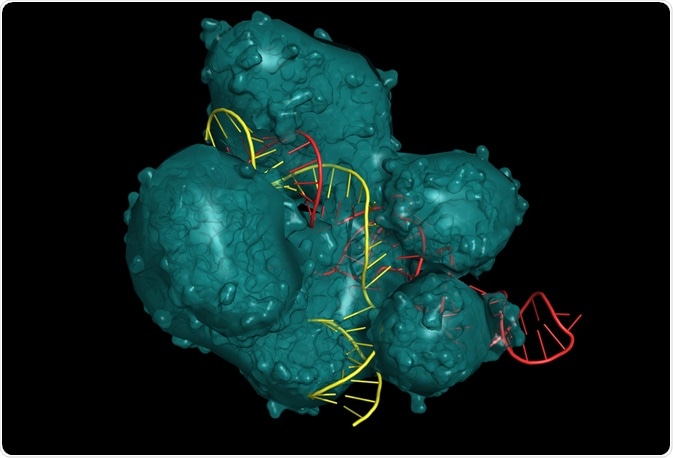 Cas9 is one of the key enzymes of the CRISPR-Cas9 system where it acts as a molecular scissor by cutting the two strands of DNA at specific points in the genome. This is executed with the help of a guide RNA which binds to the DNA and ‘guides' Cas9 to the correct region. This system is being currently used to create a biosensing system.

More specifically, the nuclease-deactivated Cas9 (dCas9) still retains its ability to bind to the target double-stranded DNA. Therefore, this enzyme can be coupled with various reporters, such as split fluorescent protein or split enzyme to create a biosensing module.  When dCas9 binds to the target nucleic acid, it causes re-integration of the split fluorescent protein or enzyme, leading to fluorescence that aids in signal detection.

This approach could increase the specificity up to a single base. Also, the guide RNA was designed to contain a single nucleotide polymorphism (SNP) present only in the genome of American, but not African Zika. Hence, this method could correctly distinguish various genotypes of Zika virus.

The Cas13 is an RNAase that belongs to the type IV CRISPR/Cas system. It contains two eukaryote and prokaryote nucleotide-binding domains (HEPN). Cas 13 also has non-canonical functions where the enzyme transforms into endonuclease with single strand RNA degrading properties. This property of Cas13 is termed as collateral cleavage activity.

The first CRISPR/Cas13 based biosensor was developed by Gootenberg and colleagues. This method is called SHERLOCK (or specific high sensitivity enzymatic reporter unlocking) and has the potential to detect DNA and RNA targets at a single-base resolution.

This system has been used to detect dengue and Zika virus, bacterial isolates, antibiotic-resistant genes, cancer mutations, and human DNA genotypes. Both Cas13a and Cas13b were found to exhibit collateral RNA cleavage properties.

Apart from Cas13, Cas 12a also has collateral cleavage activity. However, in contrast to Cas13 effectors, Cas12 effectors cleave single-stranded DNA in trans. The first instance of trans cleavage of single-stranded DNA cleavage and its use to detect nucleic acids was shown in China in 2017. This method was termed as HOLMES (r one-hour low cost multipurpose highly efficient system).

During this period, another research group in America showed a similar Cas12-based method to sense nucleic acid which was termed as DETECTR (or DNA endonuclease-targeted CRISPR trans reporter). By using this method, various DNA/RNA viruses, viral genotypes, and human single nucleotide polymorphisms can be detected within one hour from cell lines or clinical samples with high sensitivity.

DETECTR can also detect and discriminate various genotypes of human papillomavirus (HPV) in human cell lines infected with virus or even in clinical patient samples. Both Cas 12 and Cas13 methods require amplification of target nucleic acids to increase the sensitivity of detection to aM concentration. These methods can also be used in combination with other nucleic acid amplification methods.

The aforementioned biosensing systems are simple to develop or redevelop, they have a very high resolution that can detect variations up to the level of a single base. Furthermore, there is no requirement of additional instruments.

They can be used for point-of-care diagnostic systems and can also be customized to suit various in vitro mediums. As this approach is tolerant of various untreated samples and has a very low cost, it can be used for large scale screening tasks in instances where the resources are limited.

While CRISPR effectors, including Cas9 and Cas12, can recognize and cleave any target location, they necessitate protospacer adjacent motif (PAM) sequences adjacent to the target double-stranded DNA. Also, the guide sequence length and the position of the site of mutation in the guide sequence can influence the signal-to-noise ratio in the biosensing method.

Currently, only SHERLOCK method can be used to detect multiple sequences, and this too is currently restricted to four targets. Most CRISPR biosensing methods require the samples to be pretreated for facilitating the amplification and detection step.