Obesity is the excessive accumulation of triacylglycerols in fatty tissue. This results from excessive calorie intake compared with expenditure. Obesity can rarely be attributed purely to genetic predisposition, though genes do play a polygenetic role in the propensity for an individual to store fat, grow muscle, engage in physical activity, and other metabolic processes. 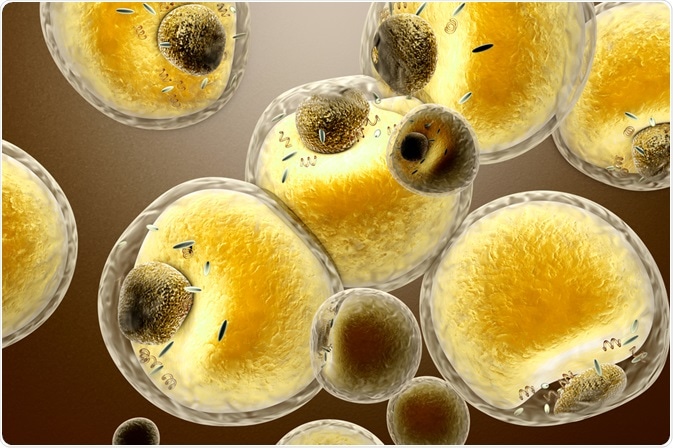 Genes that would likely have been beneficial in ancient times to enhance energy storage have become an impediment in modern times due to the great availability of extremely energy-dense foods. Very large proportions of people living in developed countries are now considered obese, generating a plethora of additional health conditions such as diabetes, arthritis, and heart and liver diseases.

Adipose tissue consists of many subtypes and is not simply an inert storage medium, acting as an endocrine organ that fulfills many biosignaling functions in the body. Many of the diseases mentioned above are the result of excess free fatty acids and adipokines, the cytokine messenger molecules produced by adipose tissue, which go on to induce toxic metabolic effects in the body.

Twin studies have demonstrated that there is up to a 75% genetic correlation with BMI, where numerous genes cumulatively contribute only modestly towards the probability of obesity, besides extremely rare mutations that promote obesity alone. As discussed, excessive energy intake is the prime source of obesity, though other factors can also be predictive of obesity later in life, such as low weight in infancy.

Learn more about the science behind metabolism

Cushing’s syndrome is a disorder related to the overproduction of cortisol, which then causes the accumulation of fat around the trunk and can be difficult to distinguish from ordinary obesity. Hypothyroidism can also promote obesity, though this is extremely rare and most weight gain accrued from this condition is in fact due to water retention, which dissipates upon hormone treatment.

Hormonal signals from the gut and adipose tissue can influence metabolic rate, enhancing an individual’s appetite or propensity to store more fat. Therefore, pathological obesity may sometimes be the result of dysregulated homeostatic mechanisms, and could potentially be controlled by biochemical means.

Leptin is one such hormone secreted by adipose tissue that circulates the body and the central nervous system, binding to leptin receptors to stimulate the production of proopiomelanocortin (POMC). One downstream product of POMC is alpha-melanocyte stimulating hormone, which upon binding with melanocortin-4 receptors in the hypothalamus lessens appetite and thereby lessens food intake.

Typically, lean individuals have been noted to gain around 10 kg of fat before leptin reaches sufficient levels to induce this effect, though individuals that are in some way unresponsive to this hormone may be liable to gain more. Mutations to this system are rare but have been noted to cause obesity in some cases.

However, as leptin levels are continuously high in obese individuals, leptin resistance develops easily, blunting the appetite suppressing effect. Leptin therapy has been trialed in the clinic and has seen some success in reversing the effects of leptin deficiency in the morbidly obese and in aiding in cases of lipodystrophy, a condition characterized by an abnormal distribution of fat. However, at present, it is far from being a treatment for obesity.

Peroxisome proliferator-activated peptide receptor gamma (PPAR-γ) is a nuclear receptor involved in the generation of adipocytes and insulin signaling. Thiazolidinediones are a class of drugs that bind to these receptors with high affinity and have been demonstrated to boost insulin sensitivity and fat metabolism, resulting in a reduction in free fatty acids that are better sequestered in the periphery or subcutaneously, but not viscerally.

Indeed, visceral fat is a significantly greater metabolic burden than when stored peripherally, and some of the effects of obesity may be alleviated in this way, though these drugs remain primarily for use on those that have developed insulin resistance.

A range of pharmaceutical measures have and are being applied to obese patients with varied success.

Many such drugs have been withdrawn due to safety concerns; for example, lorcaserin is an appetite suppressor that functions by activating specific serotonin receptors in the hypothalamus, which was withdrawn in early 2020 when a clinical trial demonstrated an increased occurrence of cancers among users.

Appetite suppressors take many forms, and very few are recommended for long-term use, with many being derivatives of amphetamines that both reduce the perception of hunger and promote the breakdown of stored fat cells.

Fat absorbers are another common category of weight-loss aids, containing enzyme inhibitors that lessen the rate of fat absorption, allowing the undigested fat to be excreted. Users should lessen their fat intake notably whilst on these drugs as side effects include loose bowel movements and the health of those prescribed these drugs is continuously monitored.

In any case, as these drugs simply reduce the quantity of fat absorbed from food they do nothing to impact the number of calories consumed from carbohydrate and protein sources, and a healthy diet and exercise remain the primary factor in any weight loss attempt.