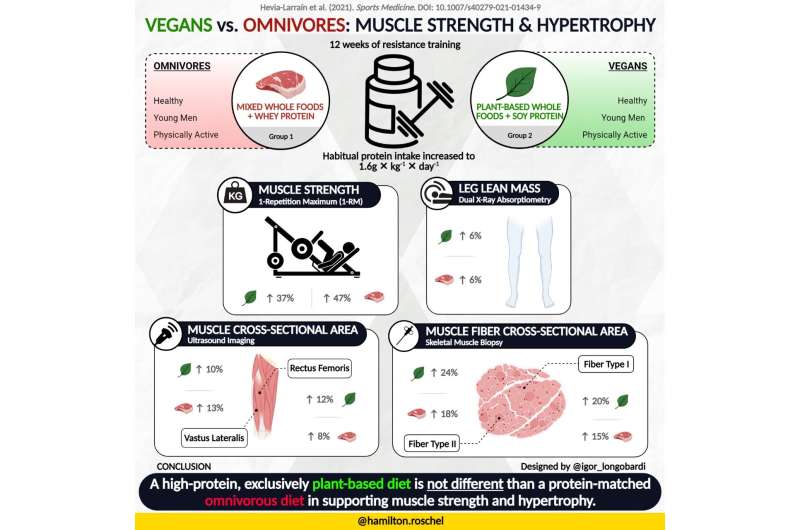 Protein intake is more important than protein source if the goal is to gain muscle strength and mass. This is the key finding of a study that compared the effects of strength training in volunteers with a vegan or omnivorous diet, both with protein content considered adequate.

In the study, which was conducted by researchers at the University of São Paulo (USP) in Brazil, 38 healthy young adults, half of whom were vegans and half omnivores, were monitored for 12 weeks. In addition to performing exercises to increase muscle strength and mass, the volunteers followed either a mixed diet with both animal and plant protein, or an entirely plant-based diet, both with the recommended protein content (1.6 gram of protein per kilogram of body weight per day). At the end of three months, there was no difference between vegans and omnivores in terms of muscle strength and mass increase.

“Like any other protein in our organism, such as the proteins in our skin and hair cells, which die and are renewed, our muscles undergo synthesis and breakdown every day. Diet [protein intake] and exercise are the main protein balance regulators, favoring synthesis over breakdown,” said Hamilton Roschel, last author of the published study. Roschel is a University of São Paulo professor affiliated with both USP’s Sports and Physical Education School (EEEE) and Medical School (FM). He also heads the Applied Physiology and Nutrition Research Group jointly run by EEEE-USP and FM-USP.

The study is published in Sports Medicine and resulted from the master’s research of Victoria Hevia-Larraín, with support from FAPESP.

The study innovated by including a clinical analysis of the effects of protein source quality on muscle adaptation in vegans as compared with omnivores, since most research on the topic to date has focused on the acute anabolic response of muscles to protein intake under laboratory conditions and not on muscle mass as such. “Our findings show that there is no impairment of muscle mass gain for young adult vegans if they ingest the right amount of protein. In fact, the outcome of both diets was the same in this respect,” Roschel said.

However, the researchers stress that for the purposes of experimental control, protein intake was made the same in both diets by means of protein supplements. Omnivores and vegans were given milk serum protein isolate or soy protein respectively in accordance with individual dietary needs in order to attain the targeted protein intake.

“In clinical practice, we know foods of animal origin generally have a higher protein content,” Roschel said. “Meat, milk and eggs contain more protein per gram than rice and beans, for example. In a clinical application with plant-based foods as the sole protein source, vegans would need to ingest a large amount of food to obtain the same amount of protein. In some specific cases, this could be a major challenge.”

The protein source (mixed or plant-based diet) made no difference, provided each subject received an adequate amount of protein. “This result corroborates other data in the literature showing that a vegan diet can absolutely be complete if it is properly planned and executed,” Roschel said. “Previous studies suggest it can even be healthier than an omnivorous diet. For this to be the case, however, it requires appropriate nutritional counseling and education regarding people’s choices in restricting their intake to plant-based sources.”