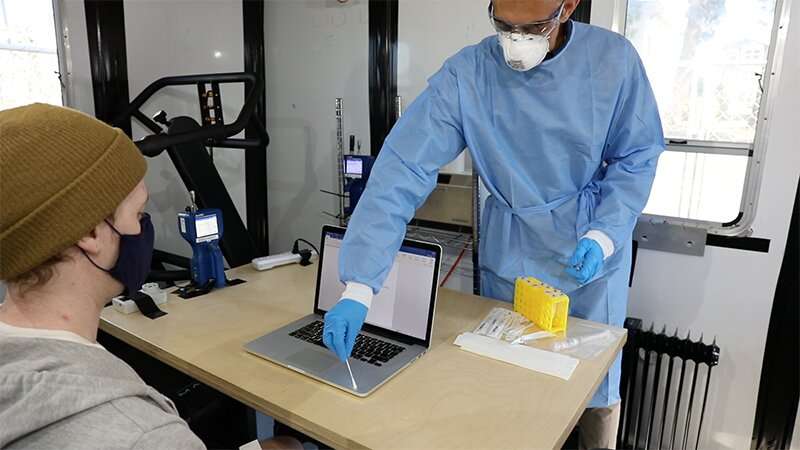 Last spring, a small, self-contained and airtight modular building was set up in the parking lot outside Barnhart Hall.

Inside were scientific instruments and assorted pieces of equipment, including air samplers, humidifiers, dehumidifiers, HEPA filters, settling plates, particle counters, a stand-up desk and a treadmill. Over a period of two months, 11 UO students who had been diagnosed with COVID-19 entered the unit one at a time and were invited to sit, stand, talk, talk loudly, cough on purpose and walk on the treadmill during a three-day set of experiments.

Throughout the course of each study day, the researchers conducting the study would measure viral particles in the air and on surfaces as well as directly from the research participants’ nose and mouth. The idea was to measure how virus particles move through the air, controlling for three variables: ventilation, filtration and humidity.

In short, they found those variables can substantially reduce the number of viral particles in the air inside buildings and should be prioritized to improve building health and safety.

“From what we’ve been able to find, this is the first real-world verification that each of these strategies that should work actually do work,” said architecture professor Kevin Van Den Wymelenberg, director of the Institute for Health and the Built Environment.

The study, published in the journal Clinical Infectious Diseases, was conducted by Van Den Wymelenberg and several staff and graduate students. The lead author was a doctoral student in architecture, Hooman Parhizkar.

The most exciting result was that higher humidity caused viral particles to drop out of the air and onto surfaces, Van Den Wymelenberg said.

The researchers had hypothesized humidity may play a factor in how long viral particles stay in the air, Parhizkar said, “but this is one of the first studies to show this phenomena in a real-world setting.”

Mid-range humidity, between 40 and 60 percent, is probably optimal for removing viral particles from the air, Van Dem Wymelenberg said. If the air is too humid, it increases the risk of mold and very dry air allows dry particles to float longer. Humid air is also good for the human immune system because it helps keep mucous membranes healthy and moist.

Parhizkar said humidification and ventilation are both important for controlling viral particles in the air, but they may counteract each other.

Finding the right combination of ventilation and humidity may be the next problem to be studied.

Another interesting finding was a relatively modest difference between the number of viral particles in the air 4 feet from the subjects and 11 feet away.

“From a statistical standpoint, there was no difference in aerosol viral load from near to far field measurements, but we also looked at other relevant variables such as particles and CO2,” Van Den Wymelenberg said. “If I were to guess, if we had an increased sample size it would would likely reveal a statistical difference.”

“It’s interesting because people are fighting about 3-foot circles or 6-foot circles,” he said. “It probably matters a little, but it doesn’t matter a lot, and being in the same room over time is what really counts.”

The research was supported by Thermo Fisher Scientific as part of its development and commercialization of a new air sampling device.

The company provided support in the form of salaries for the researchers plus equipment and reagents, but it played no other role in the study design, data collection and analysis or preparation of the manuscript.