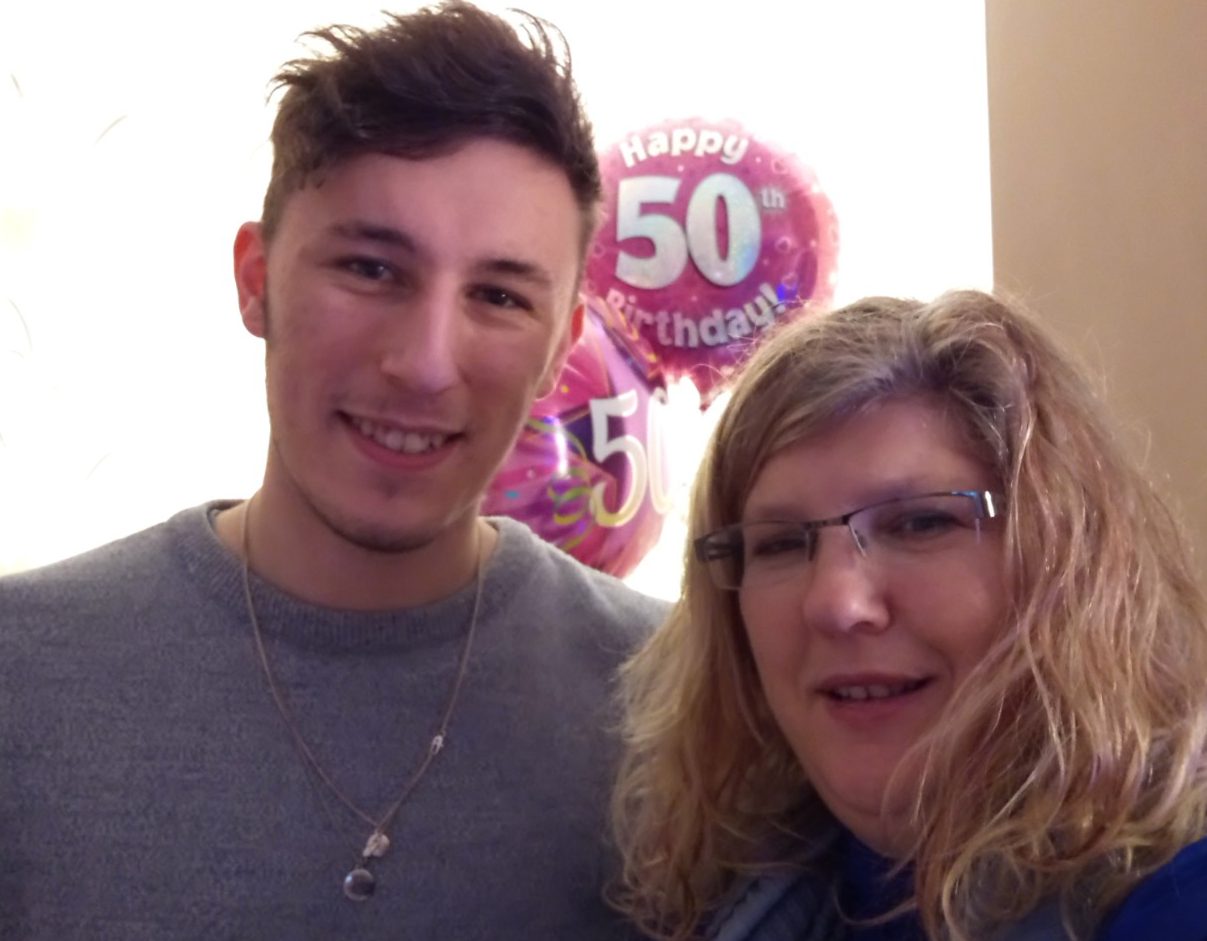 ‘Mum, I can’t do this anymore,’ Bradley whispered, with defeat in his eyes.

Fourteen hours later, he was gone. I was devastated to lose him, my only son.

Bradley had been diagnosed with bowel cancer just over a year earlier, after months of misdiagnoses. I’m sharing our story to urge others to get symptoms checked – and to plead with doctors not to overlook potential cancer patients due to their young age.

Bradley and I had always been a team – even when away studying Business at university, he returned most weekends.

A homebody, he’d moved straight back in with me after graduating. We were very close and Bradley knew he was able to come to me with any problem.

Around January 2018 he complained that he had a lot of acid reflux.

‘See the GP,’ I said. Before becoming a teacher I was a chef – I’d taught him the basics and he ate healthily.

Bradley booked in with the doctor, who said it ‘might be stress related’ and gave him antacids.

I thought they’d helped until that summer, when Bradley confided that he’d started to feel a sharp pain in the left side of his stomach.

Phoning 111, and going back to the GP, he was told it was likely a ‘grumbling appendix’ or irritable bowel syndrome (IBS).

‘If it gets any worse, come back,’ the doctor advised.

A quiet soul, Bradley wasn’t one to make a fuss so he got on with it. I wasn’t too worried at that point as he began taking painkillers that seemed to manage it.

But Bradley went back a few weeks on in a lot of discomfort; they said there was ‘a good chance’ it was IBS but didn’t send him for tests.

The problem is, the symptoms of bowel cancer and IBS are similar, so it’s difficult to differentiate. But I think it’s a doctor’s job to explore every possibility. As Bradley had had diarrhoea with blood, they gave him suppositories to help with haemorrhoids. But they hadn’t given him an examination, they prescribed it ‘as a precaution’ in case that was causing the bleeding.

Looking back now, I wish I’d intervened. But Bradley was 20 years old – a grown man – he was going to the doctors, so I felt reassured they would pick anything sinister up.

Around this time, Bradley was working two jobs – one in London as a digital marketeer and evenings as a barman at our local pub – because he loved them both. He was also a keen footballer and had a very active social life so he was constantly tired.

He had lost a lot of weight, too, but we put it down to his busy lifestyle.

Despite being in pain, wanting to make a good impression at work, he refused to call in sick one morning in October and travelled over 70 miles by train into London.

Within 10 mins of arriving at the office he was in a bad way, stomach in agony and in a panic – over the phone he said he was bleeding heavily from his back passage.

Sent home, he went to the doctor where they took bloods. I think they were expecting colitis (inflammation of the colon) as he was only 22.

Cancer crossed my mind but I pushed the worry away as there’s no history of it in our family. Plus, I didn’t want to scare Bradley.

But I had a niggling feeling that grew stronger as blood tests indicated Bradley was anaemic – which can be a sign of cancer. They arranged for a colonoscopy that November.

Not long after I’d dropped him off at hospital, I got a phone call from the nurse asking me to return straight away.

As they directed us into a side room I thought ‘this isn’t good news’.

The consultant confirmed it was bowel cancer – showing us images from the procedure, he explained that they hadn’t been able to get the camera very far as Bradley’s intestines were blocked by the tumour.

My heart pounded, shockwaves echoing through my veins. Bradley was silent as they explained they had taken biopsies and he would be sent for a CT scan.

Although terrified, I tried keeping positive for Bradley’s sake but we were both upset.

Bradley was very agitated and just wanted to leave. He found it very distressing being shown pictures. He didn’t like graphic detail and did not want to know the prognosis.

Questions filled my head but as Bradley didn’t want answers, I had to respect his wishes. He was over 18 but, to me, still my baby boy.

Refusing to hear negative talk he kept saying ‘I’m going to beat this’, determined to fight it.

Referred to a specialist at Queen Alexandra Hospital, Portsmouth, on 17 December, the biopsies were back. As Bradley was adamant he wanted to be kept in the dark, they didn’t tell us the stage but I found out later that it was stage 4 – the worst.

The doctors wanted to operate, to remove the tumour and put a stoma in to avoid the possibility of the bowel blocking entirely, perforating, and Bradley ending up in intensive care, or dying.

Bradley rejected the idea instantly, disgusted by the idea of carrying a bag. The medical team spent an hour convincing him that this was the safest option.

Begrudgingly, he agreed to it, and, less than 12 hours later he was under the knife. Sadly, it turned out, they couldn’t remove the tumour because cancerous cells had escaped the intestine and latched on to the peritoneum. But they fitted the stoma so Bradley’s waste would bypass the tumour and his bowel wouldn’t block.

He later discovered that he could still play football with his bag and felt better when he heard that some footballers have stomas.

Doctors did not spell out that his cancer was incurable as Bradley wanted to know the bare minimum. On reflection, I was naive, especially as our family hadn’t experienced a cancer diagnosis before.

Bradley struggled during his first hospital stay. Surrounded by elderly people on the ward, being 22, he was determined to get on his feet. Pushing himself each day to build strength, he wanted to be home for Christmas and he managed it – discharged on Christmas Eve.

My parents and Bradley’s dad joined us, too. It was a very difficult Christmas, though. Bradley wasn’t well, but he managed to open his presents before going back to bed, exhausted, and we sat beside him, to keep him company.

We tried to give him a good Christmas. I got him a ‘steering wheel’ for PS4 driving games and other bits he’d requested.

I wanted to cheer him up. When in hospital, he’d refused to let his friends see him as he was embarrassed about this stoma.

He wouldn’t see them over Christmas. Then, he ended up back in hospital in the new year as his stoma was blocked and stopped working. The cells had escaped into his omentum. His best mate rang me, desperate to see him.

‘No one can stop you walking in,’ I said. He needed his mates and I knew if they turned up unannounced he wouldn’t send them away. I was right.

That evening, suddenly three heads popped around the medical curtain. It was like something out of a silly sketch – one at the bottom, middle and top – we all collapsed in laughter. Thankfully, Bradley realised he shouldn’t push his friends away.

It was a turning point. Bradley began chemo that February, which continued for the rest of that year, right up until Christmas 2020.

It made him really ill at times and he’d had to quit work but I was just glad I could be with him when he needed me most.

Sadly, despite the oncologist’s best efforts, the tumour hadn’t shrunk, and last January doctors delivered the crushing news that there were no other options. Bradley was referred to pain management and palliative care. I was scared of what was to come and how I’d cope.

But Bradley wouldn’t entertain the idea he was dying, keeping positive throughout despite the pain he was in.

The only time he accepted his fate was on 19 February, the day he died, when he admitted he had no fight left. He had given it everything he could.

Our final, intimate moments are private but Bradley passed away at home with me, my mum, his girlfriend and our dog Buster by his side.

My only comfort was that he was out of pain, he had lived life to the full, and he wasn’t alone as he died.

Unfortunately, due to coronavirus restrictions, only 30 people could attend Bradley’s funeral but, on the day, it was clear that Bradley had made a huge impact on friends, family, work colleagues as they lined the streets.

Even pupils at his old schools came outside as we travelled past on the way to the crematorium. They were clapping and flags were flying. It was beautifully touching and I just wish he’d been able to see the outpouring of love.

Now, I’m putting my energy into raising awareness of bowel cancer and how important it is to get checked out, no matter your age. If you feel something isn’t right, keep pushing your doctor for answers.

In Bradley’s memory, Caroline has raised over £28,000 for Young Lives vs Cancer (formerly known as CLIC Sargent), a charity that helped support him throughout his treatment. Caroline plans to host a James Bond Murder Mystery evening in February 2022. For more information click here.