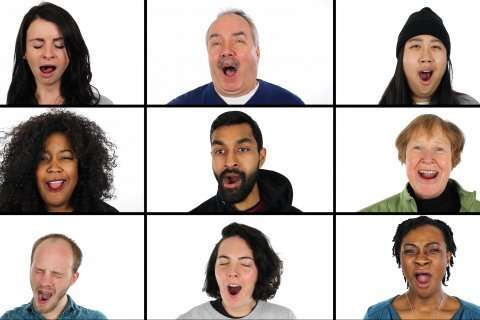 We all know that yawns are contagious. Seeing, hearing, and even thinking about yawning can automatically trigger yawns in response. Yet, some people find yawning more infectious than others. A new study on a large and diverse sample of participants found that people who score high on psychopathic personality traits are less likely to yawn contagiously. The study was conducted by an international team of scientists, centered around psychologist Andrew Gallup (State University of New York Polytechnic Institute) and biologist Jorg Massen (Utrecht University). The results are published in Scientific Reports.

Contagious yawning is a well-documented phenomenon that first emerges in early childhood, yet there is quite a bit of variability in this response. Studies show that when displayed yawning videos, only 30–60 percent of people yawn contagiously. So what is it that makes some people less likely to catch yawns from others?

Research suggests that personality factors could play a role. In particular, previous studies have shown a negative association between psychopathy and yawn contagion. “People that score high on psychopathic traits show reduced empathy, mimicry, and group cohesion, and as a result may be less susceptible to behavioral contagion,” according to Dr. Gallup. However, previous research in this area has relied on relatively small and homogenous samples of college students.

Gallup, Massen, and their team aimed to further examine this link using a larger and more representative sample. “To assess the robustness and generalizability of this association, we recruited a large and internationally diverse sample of participants from across the world,” said Dr. Massen. The researchers recruited over 450 participants from across 50 nationalities, with ages ranging from 18 to 58. In an online format, participants in the study were shown multiple clips of people yawning. They were then asked to report on their own yawning behavior and complete a series of questionnaires that measured psychopathic personality traits.

The results confirmed the expected association. “As predicted, people that scored higher on psychopathy measures were less likely to yawn contagiously,” said Dr. Massen. Some of the best predictors of yawn contagion were emotional and interpersonal personality characteristics.

The findings are consistent with research suggesting that psychopathy might represent an impairment in attachment, social affiliative behaviors, and social connectedness that affects more general features of behavioral contagion. “The fact that we are still seeing this effect in our study, with such a large and diverse group of subjects, indicates that it is a powerful phenomenon,” said Massen.

“Given the large size and diverse composition of the study sample, these findings suggest that variability along this dimension is a true and reliable contributor to individual differences in contagious yawning in the general population,” according to Dr. Gallup.