Since the identification of the double-helix structure of DNA, the scientific field of genetics has developed and found applications in many diverse industries. First discovered in the late 1990s, small-interfering RNA (siRNA) has been important within many applications in the post-genomic era. This article will discuss what siRNA is and the challenges which face its therapeutic use. 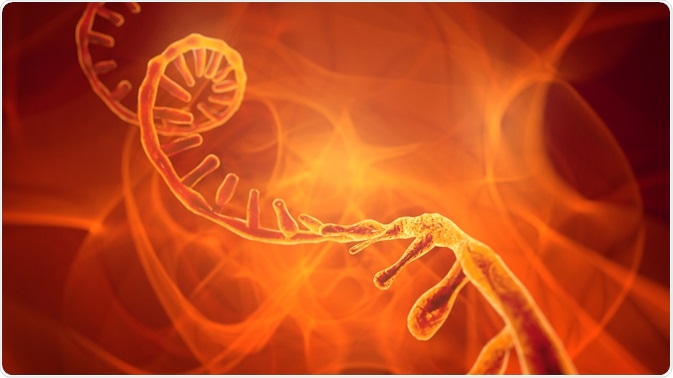 siRNA is a double-stranded RNA molecule that is non-coding. It is also known as silencing RNA and short interfering RNA. It is similar to microRNA (miRNA) and the structure is short and well-defined, usually between 20 and 24 base pairs or thereabouts. Their structure has hydroxylated 3’ and phosphorylated 5’ ends.

siRNA production is catalyzed by an enzyme known as the Dicer enzyme. This is a powerful tool in drug targeting and therapeutics development as it is used to modulate gene expression through transcriptional or translational repression.

In principle, any gene can be silenced by a synthetic siRNA with a complementary sequence. This makes them an important tool for drug targeting and validating gene function. There have been many important studies into the application of siRNA to different areas of medical research.

The method by which siRNA causes the silencing of genes is as follows:

siRNAs have very tight target specificity as they cleave the mRNA before translation, compared to the similar miRNA which silences genes by repressing translation. siRNA has 100% complementarity to its target mRNA. siRNA has also been found to activate gene expression.

However, there are challenges associated with the use of siRNA. For example, sometimes cleaving is not achieved due to mismatches between the siRNA and areas of the target mRNA near the cleaving site. There are other nonspecific effects when using siRNA.

RNAi intersects with other pathways, leading to the occasional triggering of these nonspecific effects. Challenges include:

Methods to mitigate these adverse effects have been developed in recent years. For example, off-targeting can be partially addressed by designing appropriate control experiments and algorithms which produce siRNAs that are free from off-targeting. Algorithms can be further refined by genome-wide expression analysis, such as microarray technology.

There are also continuing challenges with the intracellular delivery of siRNA. Common methods for delivery include transfection, electroporation, and viral-mediated delivery. The most widely applied of these is transfection, though it is not compatible with all cell types and has low in vivo efficiency. There is ongoing research into how these delivery methods can be improved.

Whilst challenges in intracellular delivery exist, and siRNA has weak stability and pharmacokinetic behavior, there has been a growing interest in the therapeutic applications of the technology. There has been heavy investment by the pharmaceutical sector in the research and development of siRNA therapies for a variety of medical conditions and diseases.

As they are small in size at around 20 base pairs, siRNAs can pass through areas in the body where larger genetic therapies would not be able to pass. This includes the blood-brain barrier, which has historically presented large challenges for drug delivery.

Generation and action of siRNAs and miRNAs

In conclusion: siRNAs as therapeutics – the next frontier?

siRNAs may represent one of the next frontiers in medical science.  They are currently being evaluated as to how they can be exploited in the drug development process and as therapeutic agents.

If the challenges that currently exist in siRNA development and delivery can be addressed, siRNAs could be used to target virtually any gene for therapeutic intervention. The field is an exciting one and the pharmaceutical sector is likely to continue funding its research over the coming years.

Reg Davey is a freelance copywriter and editor based in Nottingham in the United Kingdom. Writing for News Medical represents the coming together of various interests and fields he has been interested and involved in over the years, including Microbiology, Biomedical Sciences, and Environmental Science.