The hedgehog signaling pathway is one of many complex cell signaling mechanisms found within multicellular organisms, and has a very important role within developmental biology. It is found within both vertebrates and invertebrates, as will be detailed below, and is a highly studied area within human embryological development for the differentiation of cells and tissues into the brain, heart, muscles, and other systems. 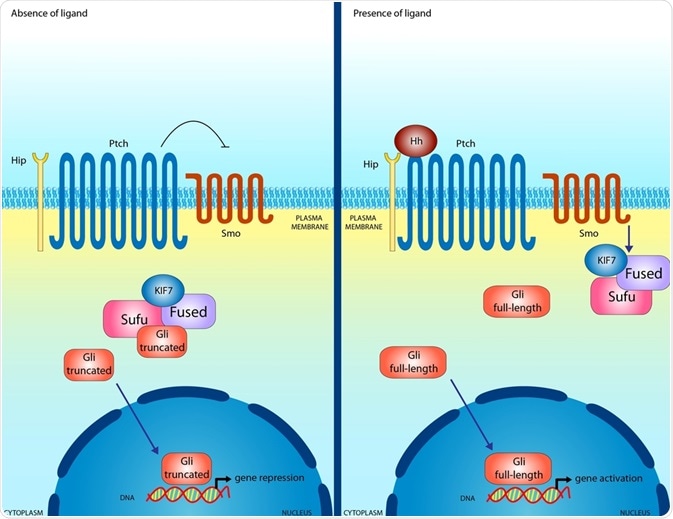 The activation of cell division, mitogenesis, is a major product of hedgehog signaling. The mechanism of how different cells divide has a major impact on differentiation and organ development. Defects within this pathway can cause serious birth defects or lead to tumor growth.

The mechanism begins when Shh binds and inactivates a transmembrane protein called Patched (Ptch). After the binding of Shh, Ptch is sent into the cell and degraded by the proteasome. Ptch normally inhibits another protein called Smoothened (Smo), found within the cell inside a vesicle. The degradation of Ptch leads Smo to migrate from the vesicle and embed in the membrane.

This leads to the activation of an important set of proteins called Gli proteins. Once activated by Smo, Gli proteins move into the cell nucleus and act as transcription factors, switching on certain genes that promote development, and switching off genes which do not.

The importance of Gli proteins

When the hedgehog signaling pathway has not been activated, i.e. if no Shh is present, then Gli proteins within the cell are modified through the addition of a phosphate group, called phosphorylation. They then become Gli-R proteins, or Gli repressor proteins.

Gli-R proteins also move into the cell nucleus but then repress all genes normally targeted by the hedgehog signaling pathway. The ratio of GLI-R : GLI present within a cell is therefore very important. The amount of Hh protein that is present will dictate the extent to which genes are expressed, as well as which particular genes are expressed.

This is known as graded signaling. Different concentrations of Hh can induce different developmental genes.

Defects in the hedgehog signaling pathway

Defects or mutations within this signaling pathway can often lead to birth defects due to developmental errors in embryos, and can also lead to development of tumors due to uncontrolled tissue growth.

One common form of cancer, basal cell carcinoma, is often caused by a lack of functional Patched protein, which actively suppresses promotion of genes involved in cell growth and development. The lack of this protein effectively permanently switches on the hedgehog signaling pathway, leading to unregulated cell growth and tumor development.

Certain Gli proteins have also been identified as causing the growth of tumors when they are not controlled by the hedgehog signaling pathway. Many different cancers including pancreatic, breast, and ovarian cancer can be attributed to dysregulation of this pathway. The hedgehog signaling pathway can be found throughout the human body, and its maintenance and regulation is consequently of very high importance.