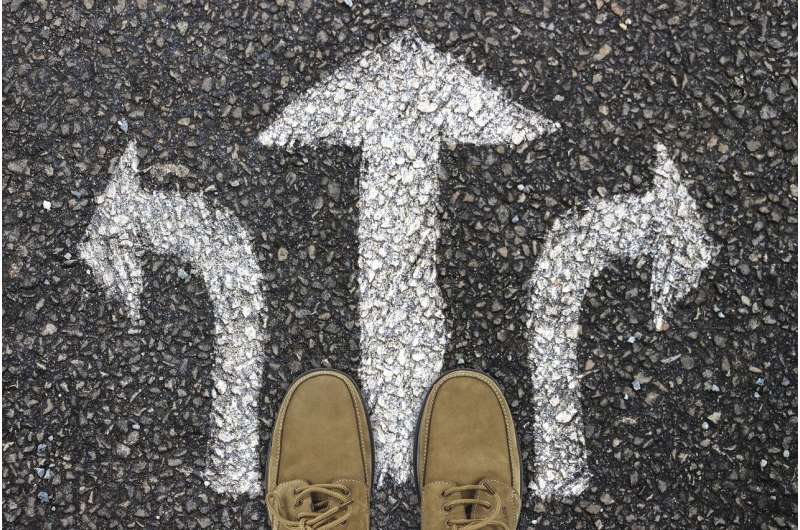 People around the world dramatically changed their shopping behaviors at the start of the COVID-19 pandemic.

Faced with new uncertainty, shoppers began stocking up on basic household items—especially toilet paper—to account for the new unknown. This buying frenzy led to shortages, even though, in most cases, there would have been enough to go around if people only purchased what they needed.

According to a study led by UNSW Sydney, reactive behavior like this isn’t unusual, but a common way to handle unexpected uncertainty.

In fact, unexpected uncertainty is such a powerful motivator for change that it often prompts us to adjust our behavior—even when it’s not good for us.

“When people experience an unexpected change in their environment, they start looking for ways to lessen that uncertainty,” says lead author of the study Dr. Adrian Walker, who completed this research as part of his Ph.D. in psychology at UNSW Science. “They can change their behavior and decision-making strategies to try and find a way to regain some sense of control.

“Surprisingly, our study found that unexpected uncertainty caused people to change their behaviors even when they would have been better off sticking to an old strategy.”

The behavioral study, recently published in The Journal of Experimental Psychology: Learning, Memory, and Cognition, is the first to show the type of uncertainty we experience—that is, whether it is expected or unexpected—plays a key role in our reaction.

For example, a city worker who knows their morning commute takes anywhere from 30 to 50 minutes wouldn’t be surprised by a 50-minute trip. On the other hand, a country driver would be very surprised if their predictable 30-minute trip suddenly took 50 minutes.

To test how people respond to unexpected change, the researchers tasked study participants with selling a pair of objects to one of two subjects—in this scenario, aliens—in a virtual simulation. Their task was simple: get as many points (or ‘alien dollars’) as possible.

Participants needed to choose which alien to sell a pair of chemicals to, but only one of the chemicals determined how much the alien would pay. They needed to work out which chemical and alien combination would earn them the greatest rewards.

An initial group of 35 participants were familiarized with the task and quickly learnt that one strategy (say, Option A) gave the better offer of 15 points. But midway through the experiment, the reward pattern changed, and Option A now gave a random number between 8 and 22 points.

“As soon as we added an element of uncertainty, the participants started looking for new ways to complete the task,” says Dr. Walker. “The kicker is that in all cases, the best thing they could do was use their old strategy.”

Dr. Walker says the pandemic—and our different responses to it—is a large-scale example of unexpected uncertainty.

“Everything changed very suddenly at the start of COVID-19,” he says.

“Many of us were suddenly all working from home, changing how we shop, and changing how we socialize. The rules we were living by beforehand no longer applied, and there was—and still is—no clear answer about when or how the pandemic will end.

“Different people tried all sorts of things—like panic shopping—to reduce this new uncertainty and return to ‘normal’. But as we’ve seen, not all of these reactive strategies were good in the long run.”

During the second phase of the trial, the researchers introduced uncertainty in a gradual way to a different group of 35 participants. Option A’s usual 15 points changed to 14-16 points, then 13-17 points, until the uncertainty rose to 8-22 points.

“The participants’ behavior didn’t change dramatically, even though the uncertainty eventually reached the same levels as in the first experiment,” says Dr. Walker.

“When uncertainty was introduced gradually, people were able to maintain their old strategies.”

While this specific experiment was designed for the original strategy to be the most beneficial, Dr. Walker says other research has shown the harm in not changing behavior when faced with gradual change.

“We can see this pattern in a lot of real-world challenges, like the climate change crisis,” says Dr. Walker.

“When change is slow and barely noticeable, there’s no sudden prompt to change our behavior, and so we hold to old behaviors.

“Trying to get action on climate change is a lot like the boiling frog fable. If you put a frog in a pot and boil the water, it won’t notice the threat because the water is warming gradually. When it finally notices, it is too late to jump out.”

Professor Ben Newell, the Deputy Head of UNSW School of Psychology, was one of the researchers involved in the project. He says an important next step in this research is translating insights about how people react to uncertainty in the lab to engaging people in climate action.

“If we can identify the triggers for exploring new alternatives, then we might overcome the inertia inherent in developing new, sustainable behaviors,” says Prof. Newell.

Being certain about uncertainty

Uncertainty is something humans face every day, whether it’s how bad traffic will be or what questions might be asked in an exam.

But the COVID-19 pandemic has thrown a new layer of uncertainty to major areas of our lives, like career, health, and living circumstances.

“While this study isn’t the whole picture for human behavior during the pandemic, it can help explain why so many people looked for new ways to add certainty to their lives,” says Dr. Walker, who is now a researcher in the School of Psychiatry at UNSW Medicine & Health.

Co-author Dr. Tom Beesley, formerly of UNSW and now based at Lancaster University, says “Dr. Walker’s work really helps us understand how people develop a representation of the uncertainty they are facing, and how they might cope, or not cope, with that.

“My lab is trying to formalize this relationship in a computational model of behavior, so that we can make clearer predictions about what we might expect to happen under different conditions of uncertainty.”

While Dr. Walker’s research is now focused on psychiatric epidemiology, he is interested to see where future research in this area goes—especially in predicting individual responses to uncertainty.