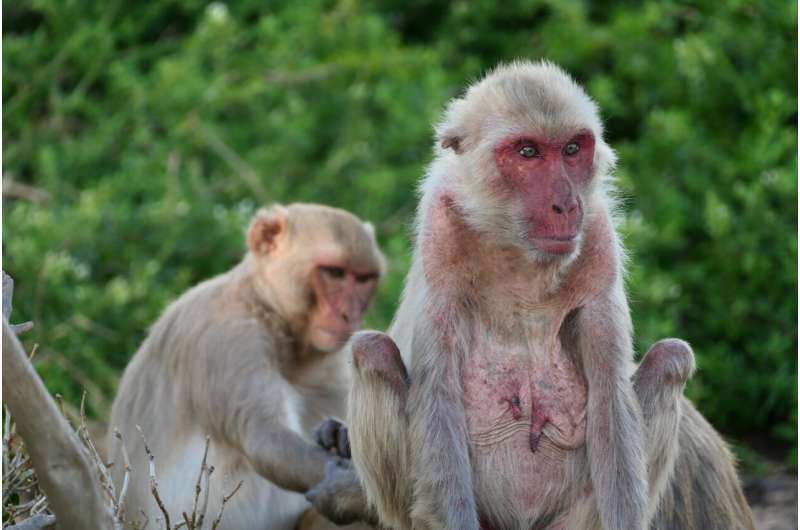 As people age, maintaining a positive and predictable social environment becomes more and more important. For instance, keeping close ties with friends and family has been identified as one of the key ingredients to healthy aging.

While some declines in health, mind and body are inevitable, studies have shown that maintaining a positive social environment can help stave off some of the key stressors and challenges of aging.

Scientists have long been interested in exploring these root causes, and in studying how the environment might provide a route to slow down the pace at which our brains age.

“We still don’t have a good handle on how our social environment can ‘get under the skin’ to affect our bodies and brains, but a lot of recent work has pointed to changes at the level of gene regulation—how our genes are turned on and off,” said Noah Snyder-Mackler, an assistant professor at Arizona State University’s School of Life Sciences, the Center for Evolution and Medicine and affiliate of the Neurodegenerative Disease Research Center at ASU’s Biodesign Institute.

With new technologies available, scientists can begin to tease out the mysterious connection between the dynamics of one’s social environment and molecular changes in the brain.

But with human studies difficult to perform and with aging processes protracted over decades of the typical human lifespan, scientists like Snyder-Mackler have turned to using our closest genetic cousins, nonhuman primates, to better understand how our social environment can alter our physiology—from the organismal level all the way down to our genes.

Now, in a new study, Snyder-Mackler and co-first authors Kenneth Chiou (a postdoctoral researcher at ASU) and Alex DeCasien (formerly at New York University, now a postdoctoral researcher at the National Institute of Mental Health) have led an international research team to demonstrate that in a population of macaque monkeys, females with a higher social status had younger, more resilient molecular profiles, providing a key link between the social environment and healthy brains.

This work was conducted in rhesus macaques, which “are the best-studied nonhuman primate model species in medicine. These animals also show some of the same age-related changes that we see in humans, including declines in bone density and muscle mass, immune system changes, and an overall impairment of behavioral, sensory and cognitive function,” said Snyder-Mackler.

“This study builds upon more than 15 years of work by our team investigating the interactions between social behavior, genetics and the brain in the Cayo macaques,” said Michael Platt, a professor in the Perelman School of Medicine, School of Arts and Sciences and Wharton Business School at the University of Pennsylvania. “The discoveries made by our team demonstrate the value of all the hard work and resources invested in this long-term study.”

“The study shows the value in building long-term collaborative networks across institutions,” added James Higham, a professor of anthropology at New York University. “Long-term funding for such networks is the key to enabling important multidisciplinary findings in naturalistic animal populations.”

The social environment and biology of aging

A broad theme of Snyder-Mackler’s lab is to investigate the root causes and consequences of variation in the social environment, examined at scales from tiny molecules all the way to the whole organism.

In the past decade, new genomic technologies have propelled researchers to probe these interactions at an unprecedented level to explore this dynamic interaction between the environment and the genome. Can a social or environmental adversity mimic older age at the molecular level? The answer is a decided yes. Snyder-Mackler’s team recently published one of the first studies showing that individuals who had experienced a natural disaster, specifically a hurricane, had molecularly older immune systems.

The group they have studied is a population of free-ranging rhesus macaques living on the isolated island of Cayo Santiago, Puerto Rico. The animals have lived on the island since 1938 and are managed by the Caribbean Primate Research Center (CPRC).

To make the connections between social status and the inner workings of the brain, the team undertook two complimentary studies: 1) generating comprehensive gene expression datasets from 15 different regions of the brain, and 2) focusing on one region in greater detail at the single cell level (in this case, a detailed analysis within a single region of the brain, the dorsolateral prefrontal cortex (dlPFC), a brain area long associated with memory, planning and decision making. This work was complemented by detailed behavioral observations and data collection on 36 study animals (20 female and 16 male).

When they grouped each sample brain region by age, 8 distinct clusters of genes stood out. Among the most interesting were those involved in metabolic processes, cell signaling and the immune and stress responses.

“We ended up identifying thousands of genes showing age-associated differences in expression patterns, including roughly 1,000 that show highly consistent patterns across the brain,” said Chiou.

Next, they homed in on their analysis to magnify the prefrontal cortex area of the brain at a single cell level.

“We complemented our brain-wide gene expression data with measures of the expression of genes in 71,863 individual cells in the dlPFC across in24 females spanning the macaque lifespan,” said Chiou.

The gene expression data allowed them to classify each individual cell into eight broad neural cell types (e.g., excitatory neurons, microglia, etc.) and then further parse them into 26 distinct cell types and subtypes in the dlPFC brain region.

When compared to the mouse and human brain data, the pathways showing the greatest similarities in variation linked to age across regions were central to brain cell-to-cell communication (chemical synaptic transmission, shared across five regions), brain growth (negative regulation of neurogenesis, share among three regions) and a key brain regulatory gene for cell growth and death (positive regulation of the proinflammatory cytokine tumor necrosis factor, shared across three regions).

But not all the findings found parallels in humans, suggesting that there may be root causes of some neurodegenerative disease that are also part of what make us uniquely human.

These key differences between the effects of age in macaques and humans could help explain the unique mechanisms underlying some human neurodegenerative diseases.

Among the biochemical pathways showing the greatest age divergence across regions were energy pathways (electron transport chain/oxidative phosphorylation, found in four regions). Interestingly, human neurodegenerative diseases, such as Parkinson’s disease (four regions), Huntington’s disease (three regions) and Alzheimer’s (one region), were associated with some of the most diverged gene sets between humans and monkeys.

Aging is associated with variation in the social environment

Next, the team applied their data to the social aspects of macaque aging, which have several unique features. In female macaques, dominance rank (the monkey analog of social status) is inherited from their mother, and for the most part, remains stable throughout their lives. This is very different from the pattern found in male macaques, who leave their groups when they mature and enter their new groups at the bottom of the hierarchy before rising in rank as their tenure in the new group lengthens.

“Evidence in humans and other social species suggests that variability in the risk, onset and progression of age-related morbidities is explained in part by variation in social adversity,” said Snyder-Mackler. “In female macaques, for instance, low social status is associated with increased mortality, and its effects on immune cell gene expression is similar to gene expression signatures of aging in humans.”

Next, they wanted to determine whether social adversity could be linked with molecular signatures of age in the macaque brain. They found that theeffect of rank on gene expression was particularly driven by younger molecular profiles in high-ranking females, suggesting that associations between higher rank and younger brain age are not expressed linearly along the social hierarchy but instead are specific to females with the highest ranks. High social status may confer several advantages, including increased access to resources, more predictable environments and decreased harassment from groupmates.

“Our findings provide some of the first evidence of molecular parallels between aging and social adversity in the brain—providing a key mechanism linking adverse (or conversely, beneficial) environments and earlier onset and faster progression of age-related brain decline and disease,” said DeCasien.

These atlases and findings will now provide valuable targets for future studies in a tractable, clinically important model of human health and aging.

These links potentially have a causal explanation; the chronic stress of social adversity, for instance, has been proposed to accelerate aging by promoting chronic inflammation from a weakened immune system. Their work underscores the importance of considering the social environment as a key modifier of aging and health.

“There is no longer any doubt that the social lives of humans and other group living animals are inexorably intertwined with the rest of their biology,” say Lauren Brent, an associate professor of psychology and animal behavior at the University of Exeter. “Exciting future research will show us why our interactions with others might impact how quickly we age, and whether these impacts are reversible.

We may be well on our way to this goal, thanks to the data and findings from this study. “Taken together, our findings provide a rich molecular resource cataloging age-associated molecular changes in the brain—in a model nonhuman primate living in a complex social and naturalistic environment,” said Snyder-Mackler. “We hope they will lend new insights into how we can all lead longer, healthier and happier lives.”