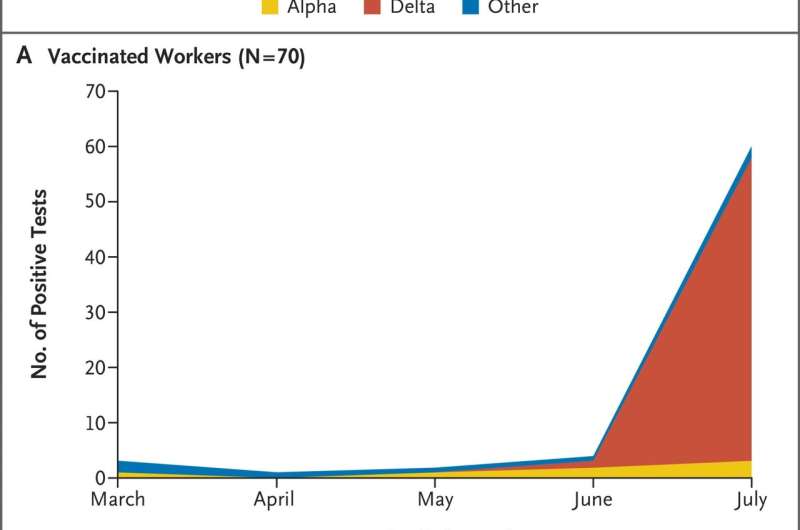 A study of highly vaccinated health workers found more contagious delta variant, combined with masking mandate end, was associated with increased breakthrough cases, paralleling exponential rise of COVID-19 infections in San Diego community. In a letter to the New England Journal of Medicine , publishing online September 1, 2021, an interdisciplinary team of physicians and public health experts at University of California San Diego measured the effectiveness of COVID-19 mRNA vaccines among health workers at UC San Diego Health, most notably during the emergence of the highly transmissible delta virus variant and coincident with the end of the state’s mask mandate, allowing fully vaccinated persons to forgo face coverings in most places.

The letter’s authors report that the effectiveness of both the Pfizer and Moderna mRNA COVID-19 vaccines significantly waned over time. Both vaccines were granted emergency use authorization by the Food and Drug Administration in December 2020, with vaccinations of the UC San Diego Health work force beginning the same month for health care workers with direct, patient-facing duties.

In the letter, the authors note that from March through June 2021 vaccine effectiveness against symptomatic infection was estimated to exceed 90 percent; by July, however, it had fallen to approximately 65 percent.

“The decline in effectiveness is not entirely surprising,” said co-senior author Francesca Torriani, MD, professor of clinical medicine in the Division of Infectious Diseases and Global Public Health in the UC San Diego School of Medicine and program director of Infection Prevention and Clinical Epidemiology at UC San Diego Health.

UC San Diego Health, with a work force of approximately 19,000, operates a robust SARS-CoV-2 testing program. If an employee reports even one mild symptom of COVID-19 during daily screening or an identified exposure, a test is triggered.

Then and now, UC San Diego Health has maintained rigorous, mandatory masking and transmission mitigation measures throughout its hospitals and clinical facilities. Diagnosed positive cases among health workers have universally been identified as community acquired.

In December 2020, workers at UC San Diego Health, like the population overall, began experiencing a surge of SARS-CoV-2 infections, the virus that causes COVID-19.

The situation improved significantly after UC San Diego Health began to inoculate employees using the Pfizer and Moderna vaccines. By March 2021, 76 percent of workers were fully vaccinated, rising to 83 percent by July 2021.

Concomitant with increased vaccination coverage was a decline between March and June in the number of workers reporting at least one symptom of COVID-19 and a positive PCR test. That number declined to fewer than 30 employees per month.

In July 2021, however, cases among this highly vaccinated population began to rise again, coincident with the emerging dominance of the delta variant in San Diego and the ending of California’s masking mandate on June 15. By July, 125 workers had been diagnosed with SARS-CoV-2 and unlike in previous months when approximately 20 percent of these cases involved vaccinated workers, the percentage had risen to 75 percent.

Notably, the vaccines still provide significant protection from severe infection outcomes, such as hospitalization and death. Among the UC San Diego Health employee cases documented, no hospitalizations were reported in vaccinated individuals and only one among unvaccinated persons.

“Unlike what was experienced with other variants, with the delta variant parents are frequently getting infected by their young children, ages 5 to 11,” said co-first author Lucy Horton, MD, MPH, an assistant professor of medicine in the Division of Infectious Diseases and director of the UC San Diego Health COVID-19 case investigation and contact tracing team. “Unvaccinated people are seven times more likely to test positive for COVID-19 than those who are fully vaccinated. More importantly, while children rarely need medical attention, unvaccinated adults are 32 times more likely to require hospitalization compared to those who are fully vaccinated.”

Vaccine effectiveness was linked to the passage of time. For workers diagnosed in July, those who became fully vaccinated in January and February had higher infection rates than those vaccinated later in March through May. The infection rate among unvaccinated persons has remained consistently higher than for any vaccinated group, although the difference in rates between the two groups has decreased over time.

“The dramatic change in vaccine effectiveness from June to July is likely due to a combination of factors,” said co-author Nancy Binkin, MD, MPH, professor of epidemiology in the UC San Diego School of Medicine and Herbert Wertheim School of Public Health and Human Longevity Science. “It’s the emergence of the delta variant and waning immunity over time, compounded by the end of broad masking requirements and the resulting greater exposure risk throughout the community.”

Co-senior author Shira Abeles, MD, an assistant professor of medicine in the Division of Infectious Diseases who has led the COVID-19 vaccination effort at UC San Diego Health, said the findings underscore the importance of rapidly reinstating key interventions, such as indoor masking and intensive testing strategies, plus continuing efforts to boost vaccination rates.