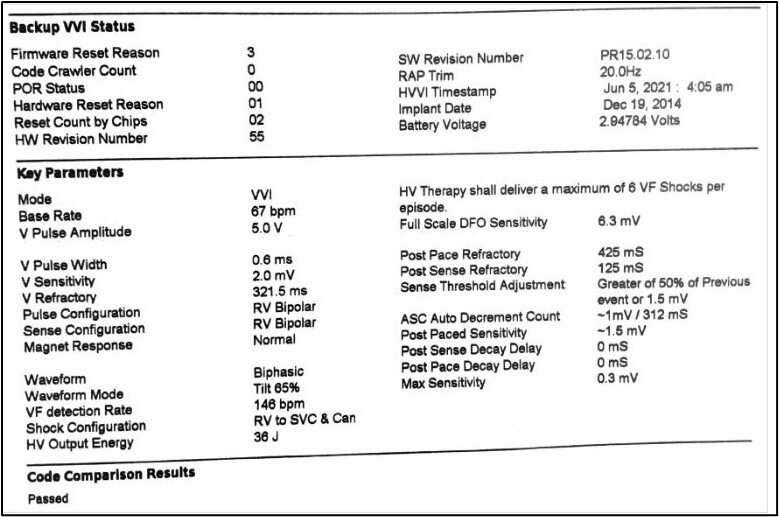 A case study of a patient who experienced inappropriate shocks from her defibrillator is presented in Heart Rhythm Case Reports, an official journal of the Heart Rhythm Society. This event likely took place because an FDA-recommended firmware update to strengthen cybersecurity had not occurred. This underscores the importance of upgrading firmware of Abbott devices according to FDA recommendations.

The patient, with an Abbott Fortify Assura implantable cardioverter-defibrillator (ICD) with a [email protected] radiofrequency communicator, presented to the emergency department after receiving two shocks from her ICD without preceding symptoms. She had a history of atrial fibrillation with rapid ventricular response.

The patient was enrolled in at-home remote monitoring for her device and had frequent in-person device checks; however, the patient’s device had outdated ICD firmware.

Consequently, St. Jude Medical/Abbott released a software patch for the radiofrequency communicator, which was successfully programmed remotely into nearly 100% of actively used [email protected] radiofrequency communicators. The company later released firmware updates to strengthen cybersecurity performance in the devices themselves. This requires an in-person visit to the healthcare provider, but it takes only three minutes to complete and is rarely associated with complications. Still, the firmware has only been updated in 24% of eligible devices. Because no harm is known to have been caused by a CIED cyberattack, deferring the firmware update may not have been prioritized for many patients. Additionally, reports have emerged showing that the firmware update may cause irreversible device malfunction with an incidence of 0.003%.

When the patient arrived at the emergency department, she was asymptomatic, and her vital signs were normal. Device interrogation demonstrated the ICD programming had reverted to backup mode, and thus no electrocardiograms were recorded during her shocks. Her device had several radiofrequency connection/disconnection events with the [email protected] system over a short period of time. This was detected as a potential cyberattack and the device entered backup mode to avoid cybersecurity vulnerabilities due to event queue overload (EQO). In backup mode, the device is automatically reprogrammed to treat any heart rhythm with a rate over 146 beats per minute (BPM) with a shock. Based on the patient’s history of atrial fibrillation with rates over 150 BPM, inappropriate treatment of atrial fibrillation with rapid ventricular response is the most likely cause of her ICD shocks.

EQO events occur most frequently in the setting of an updated [email protected] software patch being used with outdated ICD firmware. This combination is currently in use in almost 75% of affected Abbott ICDs.

The patient’s ICD was reprogrammed to the original settings, the cybersecurity firmware was upgraded, and she was released from the emergency department.

“Physicians and their patients with affected Abbott devices now have another reason to consider updating their device firmware,” said co-investigator Brett Atwater, MD, Director of Electrophysiology at Inova Heart and Vascular Institute in Falls Church, VA, USA. “While this is the first reported case, based on the reported frequencies of EQO events and the frequency of outdated firmware still in use in affected devices, other patients may experience similar events. This case highlights the importance of following FDA recommendations to update CIED firmware to protect not only against a cyberattack, but potentially even more importantly, to avoid unnecessary right ventricular pacing and ICD shocks.”