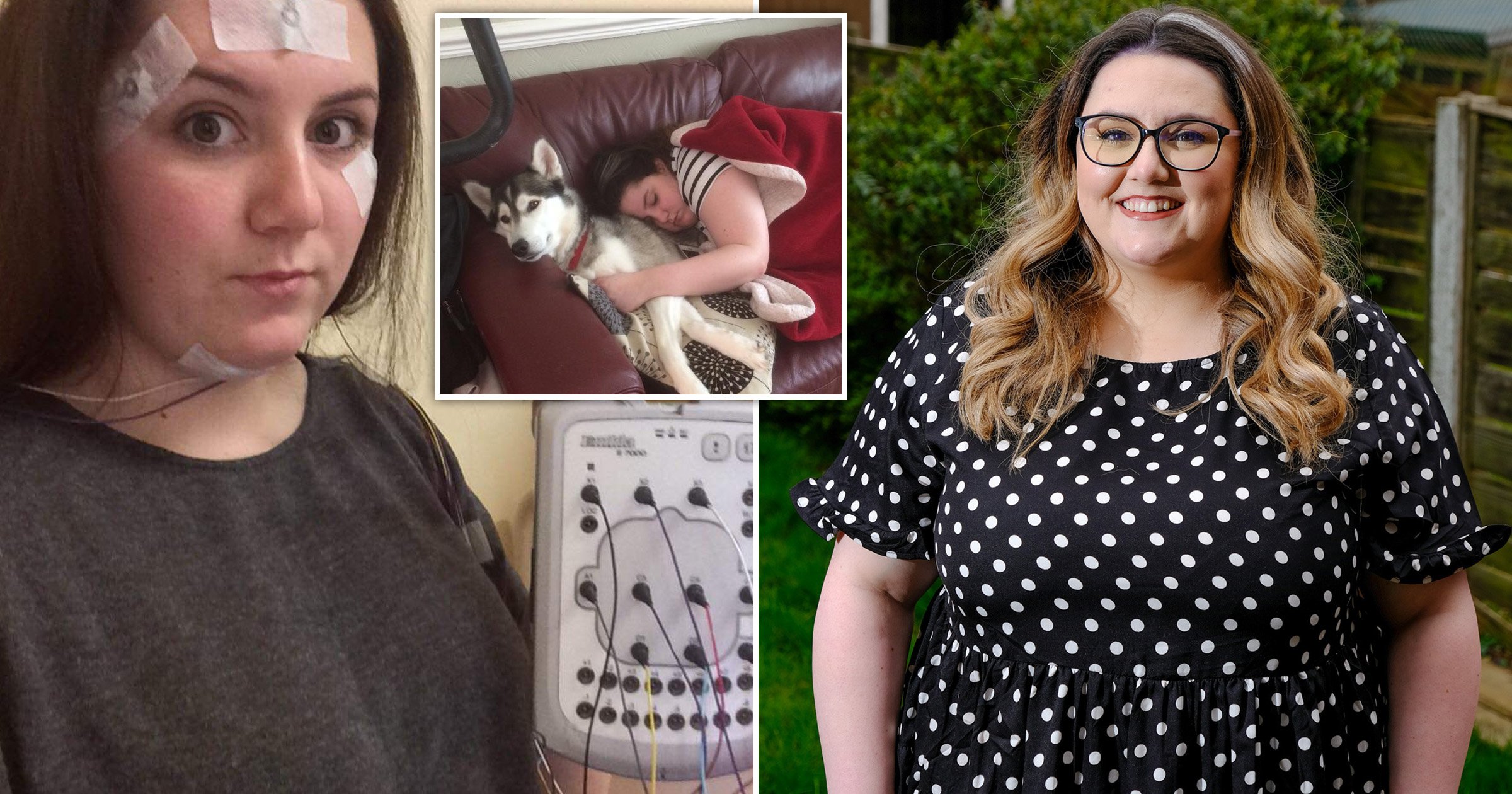 Bella Kilmartin was just a teenager she she noticed she would fall asleep without warning.

At school at the time, she was falling asleep in her exams.

She was diagnosed with a chronic sleep disorder called narcolepsy as well as a linked condition called cataplexy – a sudden muscular weakness that is triggered by strong emotions – in Bella’s case, laughing.

Now 24, it means she often ends up taking naps on nights out and has to catch up on some sleep on her breaks at work.

It can often lead to dangerous situations, like when she was swimming on holiday and giggled while in the pool, causing her to nearly drown.

Bella, of Great Barr, Birmingham, said: ‘It’s more when its something that I wasn’t expecting to be funny.

‘It’s more than a little giggle – it’d be something sudden when I wasn’t expecting to be laughing.

‘I lose control of all of my muscles and they go all weak, but only when I laugh.

‘My knees go weak, my head droops, and I’m fully conscious and aware and able to hear everything that is going on but just can’t move my body at all.

‘There have been many times that I’ve knocked a hot cup of tea all over myself but couldn’t move my arms or anything to stop the tea going all over me.

At first, Bella put the unusual symptoms down to being stressed with her A levels.

But struggling to keep her eyes open in class meant she would miss chunks of her lessons and wake up with squiggles instead of notes.

She said: ‘I was really tired all the time and falling asleep really early at like 7.30pm, but I thought it was just due to extra work with A levels and all my friends were tired too.

‘Then I started to fall asleep in lessons, and I also had other symptoms like vivid nightmares and sleep paralysis. I didn’t realise they were all associated with each other.

‘The symptoms started to get worse and I was having to nap during my free periods.’

Bella was doing well at school and was motivated, but was just really struggling to stay awake.

She added: ‘During one of my exams, I almost fell asleep – I was struggling to keep my eyes open for about half an hour.

‘That was one of the real signs to me that there was something seriously wrong as I was always so motivated to do well at school. I always got so nervous before exams so I thought adrenaline would kick in and wake me up, but it didn’t.

‘Going through this whilst doing my A Levels was the actual worst time for it all to happen. I had teachers that helped but I couldn’t stay awake in lessons and really struggled.’

Realising something was wrong, she did some research into her symptoms and suggested to her GP that she could be suffering from the chronic sleep disorder narcolepsy.

She was officially diagnosed just before she left school in 2015 and started to see a specialist for help with narcolepsy.

She later developed symptoms of the linked condition cataplexy.

Bella said: ‘When the cataplexy initially started, the best way to describe it is I’d feel light headed when I laughed.

‘Then it progressed into so that my eyes would flicker and my eyelids would go all droopy.

‘I didn’t really know what that was at first – I was convinced I had some type of heart problem. Behind my back, some of my family worried that I was on drugs because of the way my eyes would look when I laughed.’

Over the years, it has got worse and can now be very dangerous.

She added: ‘As it has now progressed into full muscle weakness when I laugh, there have been so many incidents where I’ve hurt myself after losing control of my body.

‘My mum once had to hold me by the arms on the patio steps or I’d have fallen down them and cracked my head open.

‘There’s been too many times to count where I’ve been sat down, then fallen to the side and whacked my head off a radiator.

‘When I was at sixth form, it would happen when I’m walking outside and I’d try to shout to people but couldn’t speak as I lose control of everything, including being able to talk.

‘When I’d be coming out of it, I’d be trying to tell my friends to stop laughing because I’m terrible for laughing when other people are laughing and then I lose control of my body again.’

One of the scariest incidents was when she was swimming on holiday in Tenerife with a friend in 2016.

Bella said: ‘Something funny happened – I don’t even know what – and I ended up starting to laugh.

‘All of my muscles went weak and my head started drooping under the water.

‘Luckily, my friend knew about my condition, so she swam over and literally had to hold my head above the water so I wouldn’t drown.

‘I wasn’t even able to tread water as all of my muscles had gone weak. She had her hand under my chin to keep my head up and had to swim me over to the side of the pool.

‘I was then starting to come out of it, because if I stop laughing, my muscles start to regain a bit of strength, but not straight away. I was trying to hold myself up on the side but even that wasn’t working so my friend was literally just holding me up.

‘It was terrifying at the time, and I’m very lucky she was there and able to hold me up.

‘Even though I felt that fear of drowning, I couldn’t stop it from happening so my body just continued to be weak. That was definitely the scariest time it has happened.’

Although her condition made school more difficult, she made it through her exams and scored excellent grades, securing her a place at university.

Studying psychology at Loughborough University, Bella immersed herself in every aspect of university life, including going out to nightclubs where her narcolepsy proved to be an issue.

Bella said: ‘I would get tired and just sit down and then end up asleep in a nightclub!

‘My friends would carry on dancing near me so they could keep an eye on me, and then come over at the end of the night and wake me up to take me home.

‘It happened quite a lot, especially towards the end of the night.

‘I get automatic behaviour as well, which is where when you’re falling asleep, you carry on doing the task you were doing – it’s really strange.

‘At school, I’d carry on writing but I’d be asleep so I’d wake up to scribbles all over the paper.

‘It happens when I’m eating as well – sometimes if I’m overtired, I’ll go to eat my food but start going in and out of sleep whilst carrying on eating.

‘It can be devastating because I’ll wake up and my food is gone so I didn’t even get to enjoy it!

‘That happened a lot on nights out, I’d be enjoying a McDonalds at the end of the night but then be falling asleep in my food so friends would have to wake me up.’

After graduating, she got a job as a dispenser at a pharmacy where she is allowed a quick nap in the consultation room during her breaks to get her through the shift.

Bella also writes articles for a narcolepsy awareness website in her own time and is speaking out about her condition now to help others who are suffering in silence.

She said: ‘I really struggled with my condition when it first started happening because it can be embarrassing.

‘You look strange, people don’t know what is going on, and I’ve had people describe it as it looks like I’m having a fit, so they panic, but I am fine.

‘I’m ok with it when I’m around people I’m comfortable with who know how to react, but if I’m out somewhere and it happens where people don’t know what to do, it gives me a lot of anxiety as I’m worried about falling over.

‘At first, I would never speak about my condition. I couldn’t even say the words narcolepsy or cataplexy without feeling physically sick.

‘I used to not tell anybody about it but now I’m pretty open with most people about my condition.

‘I didn’t know anybody with narcolepsy when I was diagnosed and reading about other people’s experiences has really helped me so that’s why I wanted to share my story.’

Get in touch at [email protected]