Asparagus is a commonly used spring vegetable. It is well known for its specific action on the kidneys; it can increase urine production and is used in irrigation therapy for kidney health. It is a diuretic and acts as a kidney and bladder cleanser, and is also used for preventing stones in the kidney.

The urine of people who have recently eaten asparagus is known to have an unpleasant odor. There are also people who have not smelled anything unusual in “asparagus urine” and show surprise when asked about it. There are two distinctive traits in this phenomenon: excretion of sulfur compounds in urine after eating asparagus, and the ability to smell those compounds. 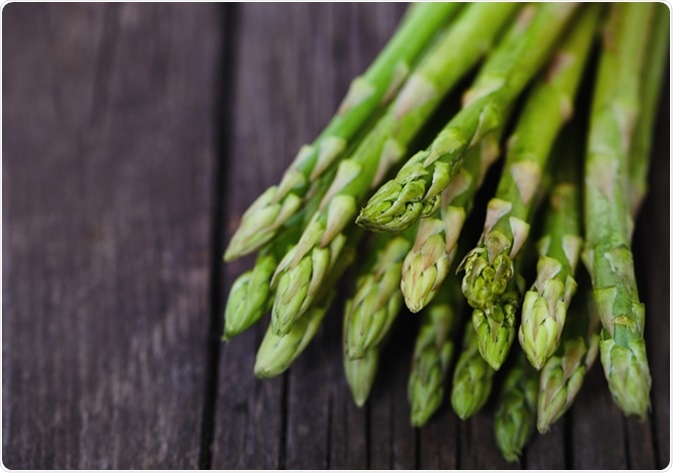 From the above mentioned traits, two variations can be noticed. A few people secrete sulfur compounds through their urine, but cannot smell them; a few other people can smell the compounds in other person’s urine without the ability to secrete the same. Thus, it is clear that the caliber to identify the smell of the secreted compound after consuming asparagus is not alone genetic.

Three conclusions can be drawn about the phenomenon of smelly urine after eating asparagus:

Asparagus is high in sulfur and contains asparagusic acid and its derivatives, which are unique to this vegetable. Although the acid itself does not smell, after eating it, enzymes in the body break the acid down into certain compounds to produce ammonia and sulphur-containing products, which includes thiols and S-methyl thioesters, which are the compounds that provide a characteristic smell to urine. A few organic compounds that evaporate rapidly in urine (volatile compounds) are the cause for the asparagus-breakdown smell. These are as follows:

The smell begins in 15-30 minutes after the first bite of asparagus for most people, and it may last for a few hours. A small percentage of people cannot smell the odor in “asparagus urine.” The inability to smell odors is called anosmia and those unable to smell asparagus metabolites in their own urine as well as in others’ urine are said to be asparagus anosmic. This lack is associated with variations in the DNA sequence called SNPs that determine our sense of smell.

Humans perceive a huge variety of chemicals as having distinct odors. The nose perceives the odor when the olfactory receptors (OR) detect the odorants. The chromosomal locations of members of each OR subfamily reveal that most subfamilies are encoded by a single chromosomal locus. The production of odorants varies in each individual and people with undetectable odour in urine may produce it, in a low concentration.

Differences in abilities to metabolize the proteins in asparagus are another factor. Besides genetics, how frequently a person eats asparagus also has an effect on the ability to detect the smell of sulfur compounds.

About 871 variations in DNA sequence are particularly associated with asparagus anosmia. These variations, known as SNPs, are located on chromosome 1—a chromosomal region that contains multiple genes connected to the sense of smell. 46 chromosomes are possessed by humans, which are categorized into 23 pairs. Chromosome 1, which contains nearly 249 million DNA base pairs, is the largest of the human chromosomes.

Generally, women seem to report that they cannot smell the odor. This is rather doubtful, as women are known to identify smells more accurately and consistently. The real reason could be that they are less likely to notice an unusual odor because of their position during urination.

Many studies have been conducted to find the reason behind “asparagus urine”, out of which most lack in details. Recent and ongoing researches illuminate the fact that both genetics, as well as the metabolism, plays a vital role in the smell of asparagus in urine.

Afsaneh graduated from Warwick University with a First class honours degree in Biomedical science. During her time here her love for neuroscience and scientific journalism only grew and have now steered her into a career with the journal, Scientific Reports under Springer Nature. Of course, she isn’t always immersed in all things science and literary; her free time involves a lot of oil painting and beach-side walks too.