Juvenile polyposis syndrome refers to a condition in which there are multiple benign polyps in the colon, or large intestine. Polyps are outgrowths occurring on the inside of a hollow organ. The number of polyps in juvenile intestinal polyposis may range from less than five to a hundred.

The condition is is called ‘juvenile’ because of the immature nature of the tissue that makes up the polyps. Most patients manifest this condition before they are 20 years old. It often runs in families, but different members may be affected to varying degrees. It affects one in 100,000 individuals. 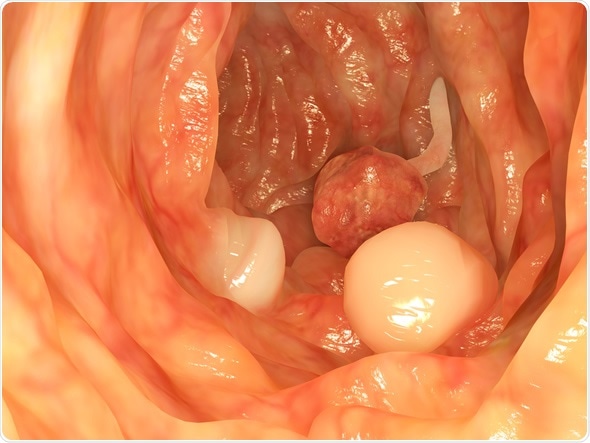 Juvenile polyposis is caused by mutations in certain genes which regulate the signaling between cell membranes and nuclei. In turn, this disrupts the way in which growth and proliferation of cells occurs, leading to the uncontrolled multiplication of intestinal mucosal cells and the formation of polyps. The most commonly affected genes include the BMPR1A and SMAD4 genes. The mutations are transmitted in an autosomal dominant fashion, which means only one parent has to possess the abnormal gene copy for a child to inherit it. In a quarter of all cases, the mutation arises de novo.

Juvenile polyposis may first come to light in the form of bleeding from the gastrointestinal tract, or as signs of anemia secondary to such bleeding. Abdominal pain and diarrhea are other symptoms of the condition.

Other abnormalities are present in about 15 of every hundred patients with the syndrome. These include:

In this form, juvenile polyps occur throughout the gastrointestinal tract, beginning in infancy. It is the most severe form and has the worst prognosis. Most infants with this syndrome develop a serious complication called protein-losing enteropathy which leads to diarrhea, weight loss and failure to thrive.

Polyps are found to grow throughout the colon, starting from childhood.

In this condition, juvenile polyps grow only in the large intestine, from childhood onwards.

Juvenile polyposis syndrome is characterized by completely benign polyps. However, the development of cancerous change in one or more of the polypoid growths is a feared complication. This is chiefly due to the uncontrolled proliferation of cells within these tumors. The relatively high cancer risk ranges from 10 to 50 percent. Colorectal cancer is thus the most common form of cancer occurring in people who have juvenile polyposis syndrome.

Diagnosis is based on finding the typical juvenile polyps in the intestine. A positive family history or symptoms of polyposis may be a reason to undergo screening for this condition. It is commonly diagnosed by finding polyps in the intestine upon bowel examination by colonoscopy or a barium X-ray. Biopsy is required for confirmation following polyp visualization. DNA analysis for the presence of the specific mutations is advised when juvenile polyps are found on histopathological examination.

Management may involve removal of all the polyps, with follow-up screening at regular examinations. In some cases, there may be so many polyps that removal of part of the colon is considered necessary.