Tanning is almost irresistible for thousands of healthy people who find it impossible to fight the need to bronze their skin. Once white skin was all the rage because it showed the person was rich enough not to have to work outside in the sun.

Later, golden-brown tanned skin became fashionable as rich people flaunted their sun tan acquired during their vacations in faraway sun-soaked destinations. Sunbathing and tanning have proved impossible to shift from public behavior in developed countries like the USA.  What lies behind this fascination? 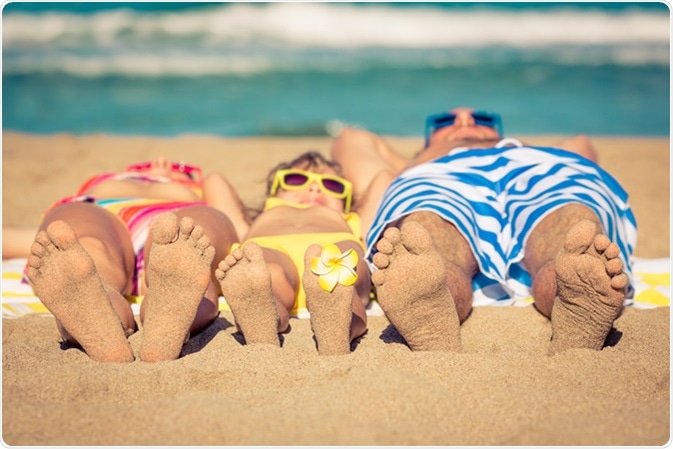 Vitamin D and the Skin

Vitamin D is a fat-soluble vitamin which is synthesized in the active form in the skin and kidneys from a precursor. This conversion depends on UV rays. The active form is essential for proper calcium and phosphorus absorption, which in turn is the foundation for bone growth and development, bone repair and remodeling, a wide range of metabolic actions including nervous transmission, blood coagulation, nervous stability, and cardiac action, as well as in preventing a host of malignant tumors from developing.

UVB is crucial in the cascade of reactions which produces usable vitamin D within the human skin. However, UV rays also lead to the development of skin cancers of various types, especially when associated with a history of sunburn. UVB rays also destroy folate, a vitamin which is equally crucial to health by promoting the normal rapid proliferation of cells that is necessary for growth and development of an organism.

It is well known that humans can change their skin color in response to the amount and duration of sunshine they are exposed to. This is called a sun tan. This is an important natural capability because of the biological variation in the amount of sunlight that different populations in different parts of the earth receive. Sunlight contains ultraviolet A (UVA) and ultraviolet B (UVB) rays which penetrate the atmospheric canopy to fall on human skin. Northern regions lose much of the UVB light because of atmospheric scattering and absorption.

For this reason it is now believed that tanning has come about as an inbuilt mechanism of the skin to help it adapt to varying levels of ultraviolet exposure and embrace the benefits of sunlight while minimizing its risks. As the sunshine becomes stronger with the advent of spring and summer, the skin begins to tan, while the reverse occurs as winter sets in.

The relative deficiency of sun exposure in dark-skinned people who live in temperate sunlight-deficient climates is possibly linked to many health conditions that are more prevalent in this group. Such individuals have less chance of getting enough UV rays to convert inactive vitamin D to the active form, because of their thicker and darker skin which prevents the rays from passing through. Such people could benefit immensely from spending a few minutes daily in the sunlight, using sunscreen to protect themselves from overexposure and staying out of the brightest sunshine.

Early on, dark-skinned races found their skin color ideal to maximize the benefits of sunlight on their skin while partly avoiding the folate depletion and cancer propensity caused by UVB rays. However, lighter-skinned populations in the subtropical, temperate and frigid zones experience very weak sunlight and minimal amounts of UV radiation throughout the year, leading to vitamin D deficiency. The pale skin is ideal to capture whatever sunlight does fall on the skin to produce active vitamin D. This is the case both south and north of 46 degrees of latitude. Between 23 and 46 degrees of latitude, variable sunlight is the rule, which leads to tanning.

Adequate vitamin D levels promote bone growth, prevent rickets, and help tuberculosis patients recover much better from the disease, which was a scourge of Europe in earlier centuries. Other health conditions which were thought to respond to sunshine exposure included rheumatism, gout, diabetes, wounds and chronic ulcers. Many infections are also more common in case of vitamin D insufficiency. Elderly people were also found to be largely vitamin D deficient, as are many children and young adults, causing osteoporosis and rickets.

Vitamin D insufficiency can increase the risk of cancers of the lung, colon and breast manifold, these being much more common than skin cancers and much more aggressive. It is also known that mortality due to cancer is reduced in the latitudes between 37 degrees north and south. In fact, for every 2-3 deaths in excess due to skin cancer, there may be 30-40 less deaths due to other major cancers, according to many researchers. This may fuel the drive to get more of the sunshine.

Low melanin levels also results in the destruction of folate, which is essential for normal cell division. Folate deficiency in pregnant women can produce developmental defects during intrauterine life.

All these may explain why tanning sets up a dependent behavior cycle so easily in some people.

The medical recommendations of seaside sunshine and phototherapy helped to popularize the ‘healthy’ tan to the point where paler skin was considered to be a sign of poor health and weakness in contrast to the desirable athleticism and glowing health associated with tanned skin.

Apart from the biological rationale for tanned skin, sun exposure produces a rush of exhilarating brain chemicals, the endorphins, in many people, triggering the reward pathway. This could illustrate the fact of sunshine addiction in reality, explaining why such individuals overlook the obvious harms of indiscriminate sunlight exposure to habitually bask in the sun, enjoying the feelings of pleasure which perpetuate the cycle.

Women and younger people seem to have a higher propensity to tanning addiction, according to present research. A hereditary factor may also operate in this dependency behavior.

Other factors which may contribute to the development of sunlight addiction include the need to resolve stress or improve one’s body image, among other psychological conditions such as dysmorphic body disorder or obsessive-compulsive disorder. It has also been seen that substance abuse is higher in tanning addicts and that beta-endorphin release may play a major role in perpetuating this addictive behavior.