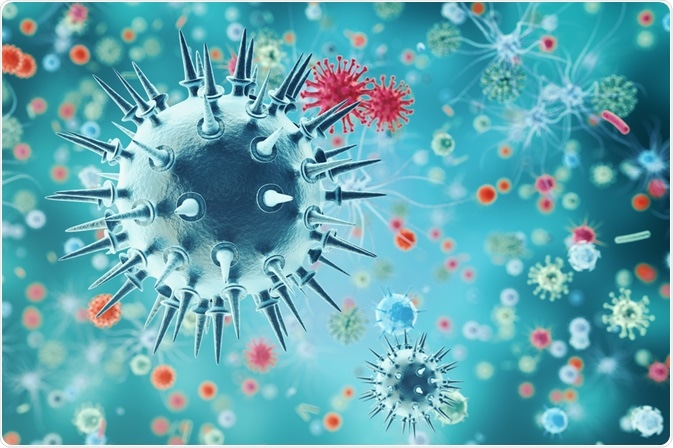 While many organisms live in the human body without detriment to our health and can often be beneficial, such as is the case with the bacteria that help break down the food we eat and the microbiota in our digestive system that play a role in our immune system, invading organisms are often the cause of disease.

The route to infection depends on the pathogen and the nature of the disease it causes. Some are easily passed from person to person while others are transmitted by animals and insects. Some pathogens are introduced into the body via infected food or contaminated water, whereas others may be picked up from certain environments.

The symptoms of the infectious disease vary greatly and again, depending on the type of pathogen responsible for the infection. Often, symptoms include fatigue and fever, although the various diseases caused by infections have a wide range of symptoms from mild to severe and sometimes life-threatening. While milder symptoms can often be treated with at-home remedies and over-the-counter drugs, some infectious diseases are serious and require professional medical attention and even hospitalization.

Infectious diseases are caused by bacteria, fungi, parasites, and viruses. Bacteria are responsible for common infections such as strep throat, urinary tract infections, and tuberculosis. Fungi are the root cause of many skin diseases, including ringworm and athlete’s foot. Other fungi can infiltrate the lungs and nervous system, causing more severe illnesses.

Although anyone can contract an infectious disease, some populations are at an increased risk. Those with a compromised immune system, such as those undergoing chemotherapy or those who have recently had an organ transplant are at a higher risk of contracting infections. Additionally, some jobs place people in situations that are more likely to expose a person to infections such as those who work in healthcare.

Further to this, people who have not received vaccinations are not protected against certain infections and are, therefore, at a greater risk. Finally, people traveling to certain destinations with high occurrences of particular infections are also at greater risk.

The global burden of infectious disease

Recent research published by The Lancet has revealed the global burden of infectious disease. Measured by the cost of the disease in disability-adjusted life-years (DALYs), the report uncovers how the infectious disease impacts different subgroups and how progression in medicine and government initiatives has impacted this in recent years.

Out of the top ten causes of DALYs in children aged below 10 years, six were infectious diseases: lower respiratory infections (ranked second), diarrhoeal diseases (third), malaria (fifth), meningitis (sixth), whooping cough (ninth), and sexually transmitted infections (fully accounted for by congenital syphilis; ranked tenth). However, the burden for children in this age group decreased significantly from 1990 to 2019, mostly due to reductions in lower respiratory infections, diarrhoeal diseases, and meningitis, all of which reduced by more than 60% during this timeframe.

Additionally, the study found that lower respiratory infections also appeared in the top ten DALYs for the 75 years+ age group.

For those in the 25–49-year age group, HIV infection was ranked second in the top ten causes of DALYs in 2019. Fortunately, data revealed that the incidence of HIV had dropped since 2005 when ART become widely available.

In terms of disease burden by geography, the study revealed that some global locations were particularly impacted by specific infections. Egypt, for example, had previously suffered greatly from the burden of hepatitis C infection. Now, following the introduction of wide-scale screening and low-cost treatment, it is expected that Egypt will see a dramatic drop in cirrhosis and liver cancer-related deaths that are frequently caused by hepatitis C infections.

Thanks to scientific research, much is already known about the nature of the infectious disease and the routes to infection. While different pathogens have different routes to infection, in general, several strategies can be introduced into daily practices to keep people safe: frequent and effective hand washing (particularly during food preparation), getting vaccinated, using antibiotics only when required, staying at home when displaying symptoms of infectious disease, disinfecting areas of the home that may have high concentrations of bacteria, practicing safe sex, and traveling wisely.

After studying Psychology and then Neuroscience, Sarah quickly found her enjoyment for researching and writing research papers; turning to a passion to connect ideas with people through writing.